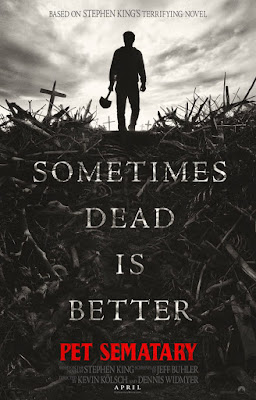 Every time October rolls around, no matter how dead this blog has been in the intervening months, it's hard to resist the seasonal call to do another round of Trick or Trailers! And as the first trailer for the new adaptation for Stephen King's Pet Sematary has made its debut today, I'm taking it as a sign to do some of my own resurrectin'! Yes, I know "sometimes dead is better" but screw it, I'm doing it anyhow!

So, how does Pet Sematary look in its 2019 incarnation?

I expect the main thing that will get some horror fan's noses out of joint is the Wicker Man-style masks that the kids wear on their way to the Pet Sematary. Those masks might strike some as a needless bit of ornamentation and I get that but I'm gonna just choose to roll with 'em.

As for the rest, the cast looks good, and I'm glad that John Lithgow isn't trying to approximate the thick Maine accent that Fred Gwynne used in the original.

Speaking of the original, how about taking a look back on that trailer for comparison's sake:

Just seeing that late '80s style font appear when "He's the King of Horror..." pops up is so nostalgic! So many horror trailers back then used that exact same font, to see it again instantly evokes memories of that era.

It definitely makes me want to revisit the movie, one that I've never been a fan of. As big a hit as that movie was, and as much as a lot of fans hold it up as a classic, it's always hit me as something of a dud.

The novel was such a rich, heartbreaking read and the movie was, to me, kind of schlocky. King himself wrote the screenplay but it felt to me like he dumbed down his own book to translate it to the screen.

He took something that was genuinely agonizing and turned it into a cheapie drive-in horror movie, with all the flavor (and dripping gore) of an EC Comic tale. Had the last shot of the movie had a Creepshow-style "Yeeearggh!" word balloon coming out of Louis Creed's mouth as the end credits rolled, it wouldn't have felt out of place.

I wonder if, in writing the screenplay, that King just didn't want to go to the same dark place that he must have written the novel from (after all, King has said how he was so disturbed by Pet Sematary's ghoulish subject matter that he didn't want to finish the book at all until his wife encouraged him to keep going with it). Or maybe he just regards movies and book has having very different sets of demands and different sets of expectations from audiences.

Whatever the case, the approach King and director Mary Lambert took worked just fine for most viewers as Pet Sematary was a big hit.

Just the same, I always yearned for someone to do a better version. Will the new version be more along the lines of what I was hoping for in '89? I don't know, maybe. We'll see. If nothing else, at least this version won't send audiences out of the theaters to a Ramones song.

Nothing against the Ramones, of course, but having them do a theme song for a horror flick really undercuts any sense of gravitas. I know that for some, the idea of a Pet Sematary remake feels a lot like treading on sacred ground but despite its classic status I think the original already did its fair share of desecrating a long time ago.