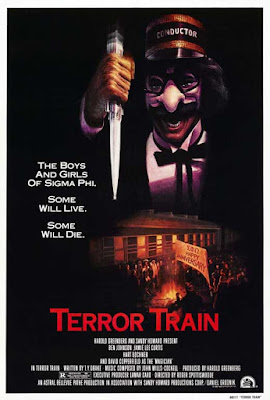 It's kind of crazy to think that in just a week, the new Halloween will hit theaters and we'll get to see Jamie Lee Curtis facing off with a masked maniac again. But as nostalgic as it is to think of Jamie Lee returning to the Halloween franchise in particular, just seeing her return to horror period conjures fond memories of her early '80s Scream Queen heyday. Laurie Strode may be her most iconic horror character but the rest of Curtis' genre legacy is also worthy of note.

My favorite JLC slasher, outside of the original Halloween, is definitely 1980's Terror Train. The most curious thing about its trailer, though, is how little it hypes the presence of Curtis herself.

You'd think that any slasher movie that had the star of Halloween would go out of its way to advertise that point but, no, based on the trailer you get the feeling that the studio thought audiences would be showing up to see the train. Weird, right? But check it out:

Maybe it was just inconceivable to studio marketing types that a horror actress would have an actual fanbase. Or maybe the thinking was that the slasher audience only cared about the body count. Whatever the case, the trailer for Terror Train doesn't even bother to play up the movie's biggest selling point, treating the movie like any generic slasher - indistinguishable from any of its many competitors.

Speaking of which, watching this trailer fills me with memories of the days when it seemed like a new slasher, that would always look like a carbon copy of the previous slasher, would open every weekend. I was too young to see R-rated movies in the theater then so I never got to see these trailers on the big screen but every time I would put on the TV between the years of around 1980 to '83, there'd be a new TV spot in heavy rotation promoting the latest slasher pic and for the longest time it seemed like it was a deluge that would never end.

Of course the slasher trend did eventually dry up - almost perfectly timed for when I was finally old enough to see slashers in the theater on my own. But it's ok, I'm not bitter!

If anything, I attribute my fondness for the slasher genre to the fact that, when it was at its peak, it was always just a little out of reach - like a train I was forever running after, desperate to hop on, but just too fast to catch.
Posted by Jeff Allard at 2:49 PM

It is weird, especially since you know they wanted her on board the film for the cache she brought. Weird.

And yeah, I remember reading through TV Guide or the Cable guide and seeing horror movies airing and being so terrified of actually watching them. They were like taboo and forbidden. I love the years I spent catching up on them all, but there was also something special about being too young for them and just letting your imagination fill it all in.

Yeah, I think the era of horror that every fan is most attached to is which ever one they lived through as kids, when the movies were always just a little out of reach. Even after you get older, those movies that were originally withheld from you still hold a special mystique.