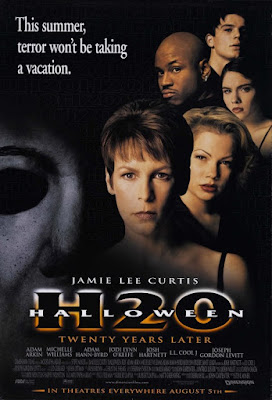 Oh my god, this is really happening!! I've got my tickets ready for a new Halloween movie tonight! And even better, I've got every reason to believe it's actually gonna be good. Woooo!! As any follower of the franchise knows, that has not always been the case. In fact, it's rarely been the case.

But anniversaries have been good to Halloween. 1988's Halloween 4: The Return of Michael Myers brought the boogeyman back with style and reestablished the Halloween brand. Then in 1998, after that brand had fallen on hard times again, it was time for Jamie Lee Curtis to reclaim her Scream Queen crown in Halloween H20.

Coming twenty years after the first Halloween, but two years after Scream (1996) had revived the slasher genre, one has to wonder what a seventh Halloween would have looked like without Scream making slashers - and horror itself - hot again. Rather than reboot the series to accommodate Curtis' return, would they have just soldiered on from the convoluted continuity of 4, 5, and 6 and brought back Paul Rudd as Tommy Doyle to have him carry on as the new Loomis? Who knows? I definitely don't think that Curtis would have been attracted to the idea of coming back to Halloween had Scream's success made that prospect suddenly not seem like an embarrassing back step.

When the trailer for H20 was released, it definitely made a new Halloween movie seem like an event again, even though I will never get how anybody ever thought it was a good idea to start putting Halloween movies out in the summer. I mean, come on. When your movie is called Halloween and your tagline is "This summer, terror won't be taking a vacation" how does that not immediately strike you as being wrong?

But anyhow, the trailer:

That trailer is so late '90s it hurts. Everyone looks so young, even Curtis - even though at the time it seemed like so much time had passed where we were now seeing Laurie as a middle aged woman and a mom to a teenage son.

Back then, it seemed that H20 underlined so dramatically how many years had passed since the original (I mean, it was part of the title!) but looking at that trailer now is to really feel the passage of time.

It definitely brings back memories of horror in the late '90s. H20 may be a Halloween movie but it's wholly of the Scream era. That may be why I've never totally warmed up to H20. Even with the presence of Curtis, it felt less like a true Halloween film to me than just another generic late '90s slasher chasing the success of Scream. That feeling was not helped by the fact that H20 was also a Dimension Films production and that its poster was in the same Scream mold of "floating heads" that was the go-to style for horror one sheets then.

And I've gotta say, the big thing that takes me aback watching this trailer is to realize just how freaking white the Halloween movies were. We think back on the '90s as being such a progressive, PC decade but jeez, you'd be hard put to see a movie today with such a lack of diverse faces. 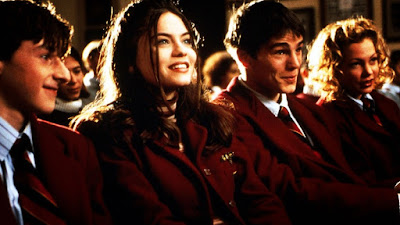 You've got LL Cool J in a supporting role, sure, but yet the main group of teens and the rest of the adult cast are white across the board. Today I think that'd be an instant eye-brow raiser. Times were different then, though - from seeing this trailer, more different than I remembered!

Even though having an experienced horror director like Steve Miner (Friday the 13th 2 and 3, House) at the helm gave hope that H20 would be a better sequel, it hit a competent note rather than an actual strong one. But competent sure beats atrocious, am I right?

It's just a shame that the best part of H20, Laurie's abrupt beheading of Michael, was immediately undone in Resurrection. That last scene in H20 was a legitimate gasp getter, even if the most naive horror fan already knew that it wouldn't stick. I expect the makers of Halloween (2018) are canny enough about the genre to not even pretend that this movie will be the end for Michael Myers. The only thing more undying than evil are horror franchises that keep bringing in the cash. 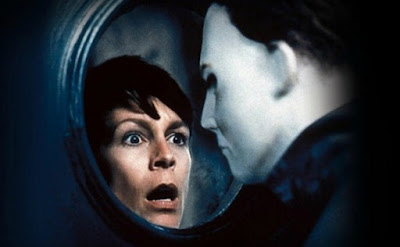 I have tickets for Friday night, so one more day for me. Cannot wait.

And yes, H20 was big doings when it came out... in the Summer. Weird timing, indeed. But I loved it, and still enjoy it, a lot. It is fun and entertains me, and that is what matters.

As for minorities, yeah. Halloween doesn't have the best track record. But LL Cool J wasn't the first. Mrs. Alves in Halloween II was the head nurse at Haddonfield Memorial, and in 3 there is Nurse Agnes at the beginning as well as Walter, the auto repair guy who brings the man to the hospital. Sadly, both are minor roles in the film. From what I have seen of the new film, it doesn't seem to feature any minorities in major roles, either. But, will have to wait and see to be sure.

Very excited to have a new Halloween film, and a non-Rob Zombie one. To each their own, those films just did nothing for me and I never go back to rewatch them. I like to have fun with my horror flicks, not feel grimy and sad.

Have fun tonight! No spoilers! :)

Way to go, Joe - thanks for reminding of Mrs. Alves! I'm not usually surprised by the lack of representation in 80s horror but definitely watching a trailer from 1998, from time when you would think that things had progressed, and seeing that they hadn't, is kind of a shock. And yes, it will be great to see a new Halloween for the first time since 2002 that isn't a Rob Zombie Halloween movie.

Great to see you back Mr. Allard. Since it's been a couple of days now, are you going to do a write-up on the new movie? Or at least drop some of your thoughts here in the comments.

Been mulling over the latest HALLOWEEN, Jose! Will post something about it soon!