The Return of True Horror 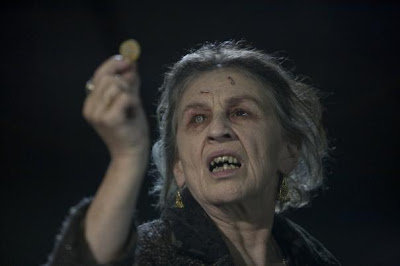 I love the trailer for Sam Raimi's upcoming supernatural thriller Drag Me To Hell (click here to see it). Besides the fact that visually it looks like classic Raimi, I like the fable-like vibe its story carries wherein a young bank employee (Alison Lohman) looking to prove to herself to her boss denies a loan extension to a wizened old lady and subsequently finds herself on the receiving end of a gypsy curse - destined to be dragged to hell by "the most feared of all demons."

I suspect, though, that some fans will take umbrage to the trailer's boast that this is "the return of true horror". One, because fans like to take umbrage at everything. And also because of Drag Me To Hell's PG-13 rating, some will believe it can't really be "true" horror. Why anyone would have that perception baffles me - aren't Carnival of Souls, Robert Wise's The Haunting, The Others, or The Sixth Sense much more deserving of being referred to as "true horror" than the likes of Hostel or Saw? But besides the issue of gore, I think what Drag Me To Hell is promising to bring back to the genre is the spirit of supernatural fun and that would be a welcome move to me. This has been described by Raimi and producer Robert Tapert as a "spook-a-blast" and judging by the sight of a scary old gypsy, demonic apparitions, a seance-gone-wrong, and a nighttime trip to a graveyard during a rainstorm, it looks like Drag Me To Hell looks to be stoked with tried and true horror elements.

Advanced word has been extremely positive so I hope that come May 29th, Raimi's return to horror will prove to be cause for celebration.
Posted by Jeff Allard at 5:01 AM

I've got high hopes for this movie, too...Raimi's got a lot to make up for after leaving me crestfallen following Spider-Man 3.

I was a little surprised at them saying "the return of true horror" in the trailer...a tad conceited, and it sounds like a pull-quote from a critic versus a marketing tagline. Still, I do hope the film lives up to its promise.

Okay, I hadn't heard of this movie (I live under a rock), so I was all like "whaaat?" at your blog. But, I checked out the trailer and YeeHaw! That looks like a fun flick! Will definitely be on the look out for this one.

Spider-Man 3 turned off a lot of people but I think it's a little underrated. Until the concluding fifteen minutes or so that unwisely placed one talky and/or downbeat scene after one another (Sandman's final confession, Harry's death scene, the funeral, and Pete and MJ's reunion in the cafe), I thought SM3 was fun stuff (even if I wished for more screentime for Sandman). I especially loved all the "Dark Peter" material. Although it struck a lot of fans as being too silly, I liked the fact that Raimi didn't take the obvious approach of making Peter's dark persona cooler than his actual self. That's such a cliche with superhero fiction - especially these days where anything 'dark' is automatically deemed cool - and I really liked that Raimi delibrately went against that.

As for Drag Me To Hell, that boast might be a lot to live up to but it's the usual ad campaign hyperbole that needs to be taken with a very large grain of salt. I'm expecting a fun time at the movies, not necessarily a new classic. Although if turns out to be that good, all the better.

Careful, last time you defended a hyperbolic media tag, you ended up defending Aja's Mirrors. Remeber "the horrorr event of the summer"? Still, let's hope for the best.

Sure I remember the horror event of the summer! How could I ever forget it? Not only did I get excited about Mirrors in advance but unlike most viewers I maintained my enthusiasm for the movie even after seeing it! Over the years, I've defended far worse and done so gladly but I have a feeling that Drag Me To Hell will be much easier to rally behind.

Hmm. My memory failed me. I thought you panned Mirrors as inane. My mistake.

No problem, CRwM - Mirrors IS inane. I just happened to enjoy it anyhow. On the upside, I imagine Alexandre Aja's film will look much better once 20th Century Fox inevitably decides to continue the Mirrors saga as a direct-to-DVD franchise.

I think the whole "PG-13 can't be real horror" attitude comes from what people experienced. People our age grew up watching the old Universal, Hammer, and AIP flicks and appreciated them as horror before we moved on to the more graphic fare as teens in the eighties. Those born just a little later grew up with horror as being an R-rated genre, since the old classics weren't showing on TV as much. Anyway, the trailer for 'Drag Me to Hell' looks good, and I'll be checking it out for sure.

Yeah, I do think the younger generation thinks it has to be about the R-rating and the gore. There's nothing wrong with that but while I love gore I can't think of many gore movies that ever scared me (with rare exceptions such as Carpenter's The Thing and 1981's Dead and Buried). The most extreme unrated gorefests, like the original Dawn of the Dead and Re-Animator use splatter for laughs and most of the R-rated horror films that have scared me - the original Halloween, The Blair Witch Project, Open Water - earned their ratings on grounds of language or nudity rather than graphic violence. If I made a list of the films that rattled me the most, I know a lot of PG fare - like Jaws and the '78 remake of Invasion of the Body Snatchers - would be there.

We'll see how Drag Me To Hell turns out but the PG-13 rating doesn't do anything to knock my enthusiasm.