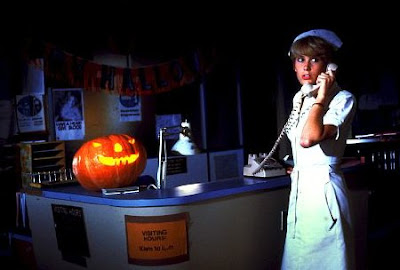 After checking out the teaser trailer for H2, Rob Zombie's latest attempt to force his self-consciously 'edgy' aesthetic onto the world of Michael Myers, I could only wish that this was coming to theaters this August instead:

Sure, Halloween II director Rick Rosenthal was no John Carpenter but I'd take him any day over a bogus 'visionary' like Rob Zombie. Even Rosenthal's much-derided return to Haddonfield with 2002's Halloween: Resurrection is starting to look a lot better now next to Zombie's efforts. Zombie is apparently impervious to the suggestion that perhaps he, well, sucks and H2 looks to reflect that.

When Carpenter wrote the famous line, "You can't kill the boogeyman", he clearly never imagined the kind of damage a blockhead like Rob Zombie could do. I know the idea of the 'boogeyman' must seem hopelessly corny to someone striving for 'reality' like Zombie, but if your embodiment of evil is nothing more than a hulking street person, it means you can't have bad-ass moments like this: 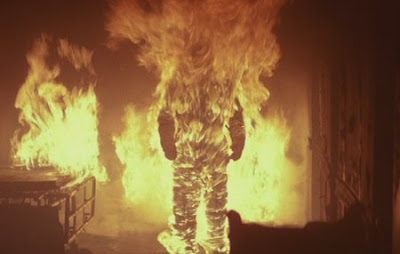 And if you can't have a Michael Myers invincible enough to reenact the full-body burn from The Thing from Another World (1951), then what good he is to anyone?
Posted by Jeff Allard at 10:04 PM

To be totally honest...I kinda like the theatrical cut of Zombie's Halloween and have a slight bit of anticipation for his sequel.

R.Z. Halloween DVD "Directors cut" on the other hand was pretty lame. The changes made from theatrical to DVD were enough to push the film towards the dislike section for me.

Yeah, I am not looking forward to his "H2" either. From what he said in interviews, I am thinking this trailer, recently released, is only the beginning of the movie, the immediate follow-up to part one. The rest, I fear, is going to just be violent nonsense.

I've been looking to track down the theatrical cut of RZ's Halloween because I initially liked it, too. I got a kick out of the three distinct chapters (Michael the Early Years, Michael in Smith's Grove, and Adult Killing Spree Michael) used to tell Michael's origin - it made me think of it as the serial killer version of Superman: The Movie where the Krypton, Smallville, and Metropolis segments all felt like their own mini-movies. But the director's cut of RZ's Halloween was so terrible and showed such a complete misunderstanding about what had worked in the theatrical cut (for instance, whereas Michael's attack on Sybil Danning's nurse was shocking in the theatrical cut because it seemed to be entirely unmotivated, Zombie reinstated a scene in which we see her being a bitch to him so now Michael is just motivated by a sense of payback - just no one's confused that Michael would attack an innocent person out of the blue. Because clearly there's nothing scary about that!) that I realized that Zombie is clueless and that the cut of the movie I had kind of enjoyed had worked in spite of him (I'm guessing the studio had a hand in the editing), not because of him. What's really annoying is that this director's cut is the only available version of the movie, apparently.

With Zombie having free reign on this follow-up, I'm imagining something truly terrible with no one bothering to intervene to save it this time around. Based on the teaser trailer, which is wall-to-wall idiocy, I think I'm gonna be right - although I would be much happier to be wrong.

I wasn't a huge fan of Zombie's first Halloween, but I think the new Halloween 2 preview might be selling it as more "hardcore" than it really is going to turn out. Seriously, Weird Al is in this! From the photos that have come from the set, it looks to be a different style all together.

Thanks for the heads-up on the RZH theatrical cut, CB! As for how hardcore, H2 will be - who knows? As you say, Weird Al is in this, which is the kind of goofy cameo that fans would've been irate about if they had cropped up in the '80s or '90s sequels. And from the looks of things - like the presence of horror host Dr. Coffin or whatever his name is - the goofiness doesn't stop there. What the tone of this movie will end up being is hard to figure.

I hope H2 turns out ok - who likes sitting through films that make them miserable? But even if it's good, it isn't really Halloween to me. I hope now that Zombie is done sharing his vision with us that Dimension will let someone with more reverence for the series take over.

The trailer makes Michael's motivation look to be his slain mother telling him to get revenge. Where have I seen this before? Rob Zombie remade Texas Chainsaw Massacre 1 & 2 and called them "House of 1000 Corpses" and "The Devil's Rejects" respectively. Now he's HANDED a remake, and he still can't resist stealing ideas.

Yeah, Zombie's a real piece of work. The Halloween series got progressively lamer the more they tried to explain Michael's actions and origins and yet that's all that RZ's Halloween's have been about.

You'd think he'd realize that what we don't understand is far scarier than the dime a dozen tale of an abused kid turning into a killer. You'd also think the idea of turning Michael Myers into an ersatz Jason with his mother's image coaching him to kill would immediately strike any horror fan as lame but apparently Zombie shares a different outlook.

I never saw the 'Directors Cut' of Zombie's Halloween remake... and I don't plan to, I'll take your word for it. The theatrical version was just fine by me and truthfully... I liked it better than the original (I was never a fan).
All of Zombie's movies have problems but I've still had a really good time in each of them.
This preview is... well, I don't care for the hoodie, and the stuff with the mother seems mighty lame. But otherwise I'm on board for it.
I can't imagine it being all that much worse than the other recent remakes... F13 and MBV3D... which I had fun at... and surely won't annoy me as much as another damn Saw sequel.

Knob, I'm with you on preferring the prospects of watching H2 to enduring another Saw sequel. When are people going to stop supporting that shit? As for the rest of Zombie's films, I'm mostly cool with Devil's Rejects although Free Bird is the most overplayed classic rock POS ever so that pretty much annihilated the end of Devil's Rejects for me.

I took the playing of Freebird at the end of Devil's Rejects as a huge joke... maybe it's Zombie's sense of humor that keeps me coming back.