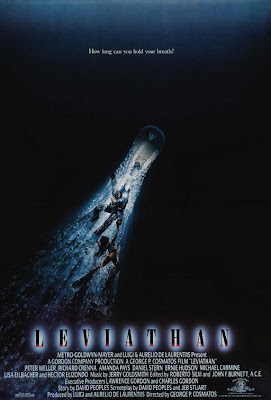 Cynics often claim that people can be sold on anything but the truth is, you can't force a trend on the American public - not even when it's for their own damn good. In 1989, despite the best efforts of directors Sean Cunningham (Deep Star Six), James Cameron (The Abyss), and George Cosmatos (Leviathan), the much-ballyhooed age of the underwater alien film never quite came to pass, causing many dreams to die with it. Even Stephen Sommers (The Mummy, Van Helsing) tried his luck on this front years later in 1998 with Deep Rising but he fared no better. American movie-goers have collectively decided that, except for the original Cocoon (1985), aliens and water don't mix. And as with most stubbornly-held positions, logic doesn't seem to apply. Of all the things to reject, why this, after saying yes to so much else?
This is a question that may never be answered to anyone's satisfaction. Of course, some might suggest that the movies in question just weren't that good. Admittedly, there's some truth to that but honestly, was there any movies that were so much better to see in 1989 than Leviathan? Not so much, no. And keep in mind that Leviathan was out months before Tim Burton's Batman so there was plenty of space between these two potential blockbusters. And yet Leviathan's opening weekend competition was Fletch Lives and it still came in second - what the hell is wrong with people?
Sure, Leviathan may just be Alien set under the ocean rather than in space but as Alien was just a big budget gloss on 1958's It! The Terror From Beyond Space, let's not be too hard on Leviathan. What's really worthwhile about Leviathan isn't its storyline but its cast. It's not everyday that you get to see an ensemble like this save themselves from a mutant fish. You've got Peter Weller, Ernie Hudson, Daniel Stern, Hector Elizondo, Amanda Pays, and Richard Crenna as the crew of the underwater mining operation - plus there's Meg Foster as an ice-cold corporate bitch comfortably ensconced out of harm's way above the surface of the ocean. In the annals of aquatic agony, that's a rocking cast. Hard to believe audiences turned their noses up at a line-up like that, but then again it's hard to figure out what people want sometimes.

Telling the tale of a mining crew stationed on the ocean floor who encounter more than they bargained for when they recover items from a wrecked Russian ship named Leviathan, this is standard monster movie boilerplate. One of the items found on the sunken ship is a innocuous-seeming flask of Vodka that is later discovered to have been spiked with metagens used by the Russian government to experiment on the Leviathan's crew. When Daniel Stern's slovenly character of Six Pack carelessly ingests the Vodka and shares it with another crew member (Lisa Eilbacher, as 'Bowman'), they invite the same catastrophe that doomed the Leviathan as both are genetically altered and mutually absorbed into the shared body of a giant fish creature. Worse yet is the fact that this creature possesses all the memories and intelligence of the people it assimilates. Once this monstrosity is up and running and everyone knows what kind of shit they're in, it then falls on Weller as Beck - the reluctant head of operations, derisively called "Becky" by Six Pack - to get his remaining crew back to the surface.
Director George Cosmatos - responsible for the '80s favorites Of Unknown Origin, Rambo: First Blood Part II, and Cobra - doesn't quite do a stellar job here but he keeps it together. Contributions from other quarters of the productions, in fact, are a little less than what you'd expect from the people involved. Screenwriters David Peoples (Blade Runner, Unforgiven) and Jeb Stuart (Die Hard, The Fugitive) were capable of better and Stan Winston's effects are atypically unimpressive here with the film's creature lacking the kind of visual impact that Winston brought to his work on The Terminator, Aliens, and Predator. But production designer Ron Cobb (Conan The Barbarian) and composer Jerry Goldsmith (The Omen, Poltergeist), along with the film's cast, are much more on their game.
Even though it occasionally flounders, Leviathan remains my underwater alien film of choice. I watched it twice on the big screen in 1989 from high in the balcony of the Mohawk Theater, a local landmark of my college town of North Adams, MA - a single-screen movie house with art deco design that originally opened in 1938 and closed in 1991 with a planned restoration still pending. Due to money issues, the Mohawk only operated sporadically and Leviathan was one of the few movies I was able to see there during my time in North Adams. In its run-down condition, the Mohawk was a sunken ship of its own, a ruined relic in need of salvaging. Whenever I watch Leviathan today, memories of seeing it unfold on that giant screen wash over me and I can't help but think of all the water that's passed too quickly under the bridge since then.

I remember getting a distinct feeling of deja vu when watching a matinee of this, right at the time before they find the ship...

Of course, I got that same deja vu when I finally saw PLANET OF THE VAMPIRES, so I guess everything evens out in the end.

Yeah, Leviathan is pretty familiar territory but that's the kind of baggage almost any monster movie comes with. I just wish that Stan Winston's creature design had been a little more original here.

I really dig Leviathan! The special effects driven climax is a bit ho-hum like you said but I love the characters and I think when the first two get infected it is genuinely disturbing. Plus, how satisfying is it when Meg Foster gets punched in the face? She was a great baddie.-UNK

I was trying to remember this movie the other day... mostly for the final scene of Meg Foster's character getting a well deserved fist.

I haven't seen Leviathan, and never even really knew the difference between it, The Abyss, or Deep Star Six. They all almost melded together to me for some reason.

The cast alone makes me really wanna give it a whirl in the near future though, so I'm glad you wrote about it.

Unk, I agree that Leviathan's climax runs out of gas - but it's a fun ride getting there. And Weller landing a right to Meg Foster's jaw is classic. In fact, I think it's the thing that people remember most about the movie.

And Matt, I'm more than happy to spread the word on Leviathan. Hope you get a chance to check it out! I'm pretty fond of Deep Star Six, too - maybe I'll give that a write-up of its own one of these days.