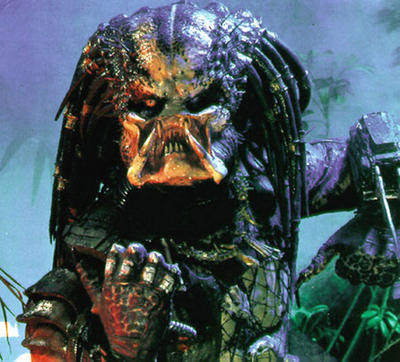 The news is out coutresy of Variety that Robert Rodriguez is involved as a producer with a reboot of the Predator franchise called Predators. I'm not always jazzed about Rodriguez's films but I can't imagine he doesn't have some good ideas on how to bring the Predators back in style - especially as he penned his own Predator screenplay back in the '90s (how much, if any, of that screenplay will make it into the new film is unknown). I think the Predator itself is hands-down the best monster that Stan Winston ever designed (sorry, Pumpkinhead!) and seeing it in action is always welcome. Plenty of fans hated on the two AvP movies but while I'm not a big fan of either I still thought the Predator material in both showed that even in a weak movie, the Predators come off looking good. If anything, both AvP's made me want to see the Predators go solo again. The first Predator is one of the few films I would call perfect and while the sequel was far from that mark, it definitely had its merits. While no plot information has come out on Predators yet, I don't think it's too early to put in an early casting suggestion to please, please, please get Jason Statham as the lead. I would really love to see Jason Statham kicking Predator ass. If we live in a world where that's the least bit possible, then by God it needs to happen.

Maybe JCVD can finally play a Predator- or at least finish a shoot as one.

It doesn't hurt to dream!

I support your bid for the one and only Statham in the Predators re-thingy! He should be in every movie.

Every movie where things need their asses kicked, definitely!