The Possibilities Of Nano-Technology 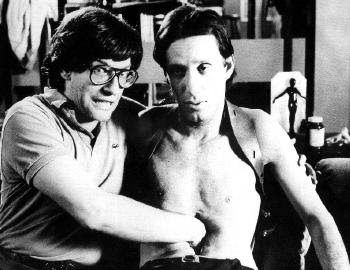 News of remakes doesn't usually ruffle me anymore. They're so commonplace and so many previously-thought untouchable classics (Psycho, King Kong, The Texas Chainsaw Massacre, Halloween) have already been retooled for modern audiences that another remake in the pipeline is hardly worth noticing. By now, it's something we might as well be jaded about. But yet hearing (via Variety) that David Cronenberg's 1983 classic Videodrome is due to be remade earns a sad shake of the head from me. I can see remaking Cronenberg's Scanners (1981) - but Videodrome? It's so purely Cronenbergian, what good could come of someone else interpreting it?
With most remakes, even if I think they're doomed to be also-rans, at least I can see the impetus to make them. In most cases, there's either the name recognition factor or a concept that lends itself to new FX (like Scanners), or both. But Videodrome? While we may be living in a world irrevocably altered by media and technology as Cronenberg described, Videodrome is still a cult item. And as far as FX goes, the old-school make-up work and prosthetics of Rick Baker remain a large part of Videodrome's charm. To see Max Renn put a gun into a slit in his stomach and pull it out as a flesh/gun amalgam fused with his own hand just wouldn't have the same visceral impact if done with CG technology. The same with the iconic image of Max pushing his face into the bulging, ballooning TV screen with Nikki Brand's lips on it. These sights have to have a tactile quality to work.
What's really troubling, though, is the angle that the remake will reportedly be pursuing. From Variety's article: "The new picture will modernize the concept, infuse it with the possibilities of nano-technology and blow it up into a large-scale sci-fi action thriller." While the phrase "large-scale action thriller" and Videodrome should never go together, what's more worrisome is the move to "modernize the concept" and "infuse it with the possibilities of nano-technology." This is suggesting that Videodrome was all about the technology and it wasn't. The format wasn't what was important about Videodrome. It wasn't about the perils of Betamax or cable TV. It wasn't primarily about how things were watched, but instead why they were watched. It's a movie about morality, it's about a cultural war. As duplicitous video pirate and Spectacular Optical stooge Harlan says to Max: "We're entering savage new times, and we're going to have to be pure and direct and strong if we're going to survive them. Now, you and this cesspool you call a television station and your people who wallow around in it, your viewers who watch you do it, they're rotting us away from the inside. We intend to stop that rot." That's the aspect of Videodrome that's still relevant, not pulsating videocassettes. Max always has a glib answer to give about why he watches "rough stuff" like Videodrome - that it's cathartic, or that it's part of his job - but more honestly, as Barry Convex prods him to admit ("Why would anyone watch a scum show like Videodrome?"), he simply likes it. And that alone, in the eyes of moral watchdogs concerned about society transgressing too freely into taboo territory, makes Max and the audience he seeks to cater to worthy of annhilation.
Of the remake, I suspect that Lynne Gorman's words as Masha will prove to be prophetic. While the remake will surely be a much more lucrative enterprise for Universal, the original "has a philosophy. And that is what makes it dangerous."

Possibilities of nano-technology, my ass.
Posted by Jeff Allard at 4:36 AM

Now... I don't much give a crap about someone butchering remakes of Halloween... but Videodrome comes much closer to untouchable for me.
The name does have cache though... I'd bet a lot of folks have watched it because it's got kind of an intense reputation... and found the visuals 'ooky' even if they weren't paying attention to what it was about.
You're right, Scanners would make a lot more sense for a remake.

As for the 'action' angle... I'm just as annoyed by the folks who want to turn horror movies into action/adventure as I am by the ones who want to toss in lots of 'comedy'.

Yeah, unless they get someone really top-notch to direct this I see nothing but failure. And even if they did get someone like, say, Darren Aronofsky to take this on, I still can't see it working. I mean, when even remakes that ought to work - like Stepford Wives - are total botch jobs, what chance is there of anyone doing right by Videodrome?

Hmmm....I think Spectacular Optics and Barry Convex are really behind the remake. I think most people have heard of Videodrome, but not really seen it (or probably "got" it). The sensation-seeking dullards can swarm to the dumb remake, and the tumors can start growing in their brains...Not that Convex & Co. wouldn't be doing it via Facebook and Twitter already...Interestingly, the "aliens using TV to rot brains to make them more edible" plots of the recent Hulu ads are somewhat similar to the Videodrome signal, I think.

Thanks, Ivan! I'm with you on your conspiracy theory - "why would anyone watch a scum remake like Videodrome?" - but I'm curious to see who they get to direct it. It's a sucker's gig so we'll see who goes for it.

And good mention of Twitter and Facebook. As Cronenberg predicted, our electronic lives have become more real - to many of us - than our actual lives.

We have just added your latest post "The Possibilities Of Nano-Technology" to our Directory of Science . You can check the inclusion of the post here . We are delighted to invite you to submit all your future posts to the directory and get a huge base of visitors to your website.

Agreed that remaking Videodrome should be a federal offence, but I would argue that it was already remade, by Cronenburg himself, in 1999's Existenz. I mention this not to do a film geek "gotcha", but to underline what a bad idea it is to remake something as significantly original as Videodrome was (and is).