The New Lord Of Awesome Disappoints 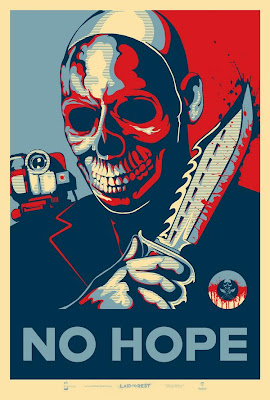 A few months ago, when the first stills of 'Chrome Skull', the metal-masked slasher of Laid To Rest were released, I instantly dubbed him 'The New Lord of Awesome' because with a look like that, what else was there to call him? Unfortunately, having now seen Laid To Rest, I wish my experience with the film had stopped at those early stills. I consider myself to be a real slasher aficionado but while Laid To Rest has gotten effusive praise from most quarters of the horror press, unfortunately I think the only thing it laid was a goose egg.
My full review is up now at Shock Till You Drop.
Posted by Jeff Allard at 8:54 PM