The Ball Is Back! 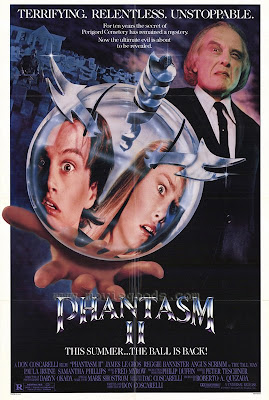 In an unexpected bit of good news, the lone Region 1 holdout among the Phantasm series, 1988's Phantasm II, is finally coming to DVD in the US on September 15th courtesy of Universal. This'll hit stores on the same day as a slew of other Universal horror titles, including back catalog classics from John Carpenter and Wes Craven, but the arrival of Phantasm II eclipses everything. Until now I've held off buying any of the other three Phantasms until I knew that II would be available on disc because the Phantasm saga isn't a saga without its best entry.

With the deep pockets of Universal backing him, writer/director Don Coscarelli didn't squander the opportunity to go bigger and better on this follow-up. The new spheres, with more accessories than a Swiss Army Knife from Hell, were great and the array of new mayhem they were able to inflict was bad-ass. And even though Coscarelli ran into problems with the MPAA, I still feel that he was able to get away with a lot. The scene where a sphere burrows through the body of one of the Tall Man's lackeys remains one of my favorite splatter moments of the '80s, as does the Tall Man's oozing 'demise' as acid is pumped into his body.

With its action taking place in cemeteries, funeral homes and mortuaries, there was a grand ghoulishness to Phantasm II that I loved. That summer I wanted to be riding along in that black '71 Hemicuda with Reggie and Mike, tracking the Tall Man from one ravaged small town to the next, prowling among the crypts and graves that his minions had raided. I was never one for role-playing games but by God, if they had ever come out with one for Phantasm I would've been the biggest dork for it.
By rights, Phantasm II should've been Coscarelli's graduation to the big leagues and vaulted the Phantasm series to the forefront of horror franchises instead of being consigned to the graveyard of cinematic duds. How audiences didn't respond to this, I don't know. Maybe it was too confounding, or too corny, for most people. I loved it unabashedly, though. In every regard it struck me as cool. For me, it was a sequel just as successful as Aliens or Evil Dead II. When it comes to Phantasm II being more widely regarded as one of the best of the '80s, though, maybe this DVD release will finally get the ball off the ground.

This is very cool news indeed. Phantasm II just recently showed up on-demand and I have been itchin' to watch it again.

I love PII for all of the reasons you mentioned and my best memory of the film is from the trailer itself.

At the very end when the girl says "It's only a dream" and enter Angus saying "No. It's not." Scared the balls off of me when I was a kid. Not that I had balls then...I'm just sayin'.

I love that bit at the end, too. Even though that exchange happens in the actual movie in regards to the dialogue that's spoken, the scene as it plays out in the trailer was shot specifically for the preview.

Plus, you can't go wrong with the two, sawed-off double-barreled shotguns being fused together for a truly kick-ass weapon. This has always been my fave PHANTASM film altho, I wonder if it's gonna have any extras. Universal is notoriously stingy on that kinda thing for older releases.

Yeah, the quadruple-barreled shotgun is awesome. Now THAT's a boomstick! As for the prospects of extras on the Phantasm II disc, I'm betting that this'll be a bare bones affair with maybe a trailer as the sole bonus feature. Anything more than that would be a surprise to me but I'm just happy the movie is getting released.

You've got my curiosity up about all the other Universal horror titles coming out on DVD the same day as Phantasm II. Is there a link you can provide, or can you list the movies here?

The other titles are:

John Carpenter Master of Fear Collection: The Thing, They Live, Prince of Darkness and Village of the Damned.

The Wes Craven Horror Collection: The Serpent and the Rainbow, Shocker and The People Under the Stairs.

The Wolf Man (1941) Special Edition: The original 1941 version of The Wolf Man is being released as part of the Universal Legacy Series.

Here's a link to an article, too:

Hope that helps! I'm sure there'll be some more info to come.

Here's a link to an interesting version of PHANTASM 2 you can get on DVD:

Scroll down a bit.