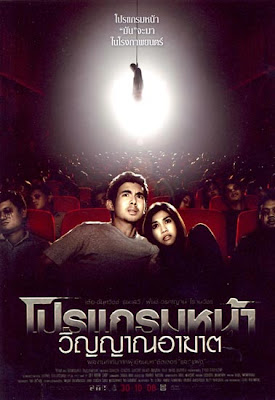 I have a huge affection for horror films involving movie theaters - whether it's just one scene as in The Blob (1958, 1988), He Knows You're Alone (1980), Deadly Eyes (1982), Gremlins (1984), and House of Wax (2005) - or an entire film, as in Demons (1985), Anguish (1987), or Popcorn (1991). Whether it be slashers, zombies, demons, or monsters that are loose in the theater - I'm always ready to see some terror in the aisles. Given that, the Thai film Coming Soon - about a projectionist who bootlegs a cursed horror film - has immediately shot to the top of my must-see list. I just wish it was actually coming to a theater near me instead of likely going direct-to-DVD in the US.

I too share your love for movie set uhhh...movies. I like and or love pretty much all of those movies on you quick list and that scene from the Blob remake was so cool.

Hopefully it'll come to DVD sometime this year. And something tells me to expect a US remake before too long.