Somebody's Throwing A Party For The Top Ten 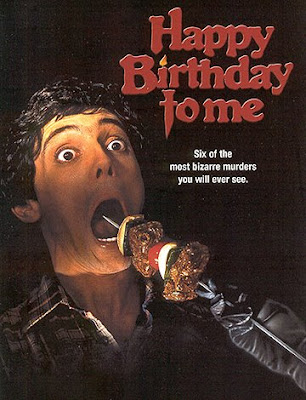 If this news doesn't pan out, so be it - but I hope it turns out to be legit. Over at Bloody Disgusting, they're reporting that Lionsgate is planning a 3-D remake of 1981's Happy Birthday to Me. Apparently the studio was so pleased by the box office performance of My Bloody Valentine 3-D that rather than pursue a sequel to that hit, they'll be remaking another classic '80s slasher film instead. While I don't see why they can't do both - remake HBTM and do a MBV 3-D sequel - if forced to settle for just one, I'm more predisposed to seeing a new HBTM.

Telling one of the most outrageous slasher stories of the early '80s, HBTM is pure bliss. Starring Little House on the Prarie's Melissa Sue Anderson as Virginia, a member of Crawford Academy's elite 'Top Ten', HBTM is a mystery that gives logic and reason and run for their money. When a killer begins stalking Virgina's exclusive social circle, and the Top Ten is quickly narrowed down to the Top Half Dozen and counting, the question HBTM asks is - who has it out for Crawford Academy's most popular students? Even Virginia herself is a suspect and with her birthday coming up, it looks like there may be no one left to celebrate it with her.

Anyone who's seen HBTM knows how daffy its concluding twist is. Awesomely daffy, yes - but daffy nonetheless. I really can't see a remake being able to sell the same ending today (not with its Scooby-Doo style mask peel-away - you might as well have the killer revealed as a robot). I just hope that Lionsgate can rope in a writer and director as enthusiastic and genre-savvy as MBV 3-D's Todd Farmer and Patrick Lussier. I recently re-watched MBV 3-D on DVD with my wife and even on a second viewing and in mere 2-D, I still found it to be a satisfying slasher film. It was clearly the product of people who are slasher fans themselves and it exhibits a natural affinity for the genre. If a HBTM remake can be helmed by similarly knowledgeable team, I'm alright by that.

And really - wasn't the famous shish-ka-bob scene totally made for 3-D? The original poster can be used completely as is - just slap a "3-D" on it. My only worry is that seeing that scene in 3-D, my thought won't be one of terror or revulsion but extreme hunger. Honestly, you can't suspend a shish-ka-bob in the air in front of me, larger than life, and not have me think of how delicious it looks - even if it's causing someone's gruesome death.

But no matter how this remake turns out, seeing HBTM in 3-D is secondary to me - what I really want to is for a remake to instigate a DVD re-release of the original HBTM. The previous HBTM DVD from Columbia was an infamous botch job, replacing the theatrical score with an alternate disco-tinged score by the original composers that ran roughshod over the moody piano and string music that fans were familiar with. I found it unwatchable in that state and I hope a remake would drive Lionsgate to give the original the DVD release it deserves, just as they did with My Bloody Valentine. If so, that'd be the best present - birthday or otherwise - that this HBTM fan could hope for.
Posted by Jeff Allard at 4:14 AM

Email ThisBlogThis!Share to TwitterShare to FacebookShare to Pinterest
Labels: Happy Birthday to Me

I've never actually seen Happy Birthday to Me, but always have wanted to. It was recently added to Netflix instant watch and I will probably check it out soon enough...I just hope it's not the dance fever version you speak of!

But I totally see a remake being good just for the reason of getting a proper release of the original out on DVD. I love the MBV release that coincided with the remake and who knows if it would have happened if the remake hadn't been made.

Matt, sorry but you're probably going to get stuck with the disco dance-off version - but if you've never seen the movie before, that soundtrack might not be a big deal to you. I think you'll like the movie regardless.