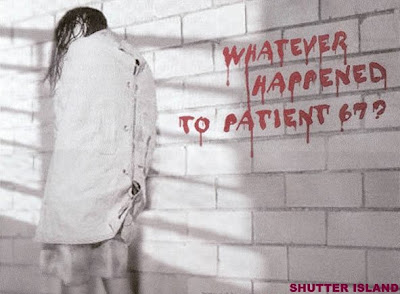 Unless there's a lot of release date shuffles in the coming months, this October is slated to be especially horror-heavy with the remake of House on Sorority Row, the horror-comedy Zombieland, the Stepfather remake, the Richard Matheson adaptation The Box, and the inevitable Saw VI all coming to theaters. But the films that are likely to be the scariest that month are two that will not be sold as horror, the Cormac McCarthy adaptation The Road - which is already giving me nightmares - and the adaptation of Dennis Lehane's thriller Shutter Island, directed by Martin Scorsese.

Shutter Island has been off the radar of most of the horror press until now but with the release of the first trailer, a lot more notice will be paid to it as the trailer makes Shutter Island look like irresistible pulp fun. You have an isolated island-set insane asylum, a missing patient (a murderess, no less) with a secret, and a conspiracy involving the asylum staff that threatens to engulf an unwitting federal marshall (Leonardo DiCaprio). Based on the high-pitched Gothic feel to this trailer, Scorsese was clearly having a ball with this material and Shutter Island looks set to trump anything from the straight-up horror camp this October.