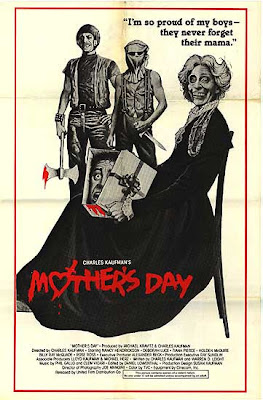 Even though Father's Day has just passed us by, it's Charles Kaufman's Mother's Day (1980) that's jumped into my thoughts lately. My pal Matt at Paracinema recently posted a write-up on the satirical slasher and a remake is currently in the works (natch!), courtesy of Darren Lynn Bousman (Saw II, III, and IV). But while I'm no fan of Kaufman's film - it's shoddy, mean-spirited, and only sporadically funny - what I have absolutely loved about Mother's Day from the start is its incredible poster. As a kid, when I first saw this poster reproduced in a newspaper advertisement (which in smudgy black and white newsprint only made it look cooler), at the height of the slasher fad, I was in thrall with its ghastliness. Even with as many outstanding posters as the early '80s boasted (hello, Happy Birthday to Me!), Mother's Day knocked everything else on its ass.

I mean, the poster for Maniac (1980), with a psycho brandishing a knife in one hand and a bloody scalp in the other, is pretty astonishing in its nastiness but for me, that's all that poster is - just bluntly unpleasant. Mother's Day, though, is different. There's a EC Comics-style jolliness to it (beginning with its nod to Whistler's Mother), coupled with a hardcore slasher attitude. Every element of this poster is macabre - the decapitated head in the gift box, the grinning Mother with her half-skull face - but what makes this poster a win is the two cretins lurking in the background (known as Ike and Addley in the movie), with their knife, bloody axe, and creepy apparel.

Up front the image of the mother displaying her 'gift' sells Mother's Day with a ghoulish wink, a sight that wouldn't have been out of place on a poster for an Amicus anthology. But behind that, Ike and Addley are all business - pimping the more sordid, threatening horror of the '80s. Ike and Addley are the kind of authentically skeevy-looking degenerates that haven't been seen in horror movies since about 1983 or so. Sure, you'll see some impressively deformed inbred hillbillies now and then (as in 2003's Wrong Turn) but those are clearly the fantastical creation of make-up maestros whereas Ike and Addley were in the tradition of Ed Neal's Hitchhiker in Texas Chainsaw Massacre - characters portrayed by actors who were able to inhabit their parts with such uncomfortable reality (sans make-up, it seemed) that it looked like they had been cast in mid-crime, rather than from an audition - and the artist's rendering of Ike and Addley on the poster for Mother's Day does these despicable boys full justice. In a world of PG-13 remakes, and a world in which even horror movie posters are about showing off its most photogenic cast members rather than showing anyone who might make your skin crawl, you'll never see a pair of psychos like Ike and Addley again. Hell, even Robert Silverman's sweaty, suspicious school gardener from the original Prom Night wouldn't make it into a movie - even unattractive red herrings are forbidden.
I don't spend much time lamenting how the genre has changed and pining away for the way things used to be because honestly, there's still a lot out there that I like. But whenever I look at that Mother's Day poster, I have to admit that something's been lost along the way. Even today's most balls-out films aren't sold with true exploitation posters anymore. The horror genre has shed the tawdriness that it used to own so proudly, and that's a mother-lovin' shame.
Posted by Jeff Allard at 9:22 PM

Kudos on this post, Jeff. Great points, all of them.

I remember the Mother's Day ad in my local paper too, and as an 11-year-old I reveled in what amounted to a hint of free gore delivered to my doorstep.

I also remember being so jealous of David Bauer, a boy in my 6th grade class who had actually seen Mother's Day (at least, that was the rumor on the playground).

Thanks, FF! Funny that you mention your buddy from back in the day - I think every horror fan had that one friend in their pre-teen years who's parents took them to see all kinds of R-rated fare. My own 6th and 7th grade pal was David Scandlon - who gave me the inside scoop on movies like The Shining and Deadly Blessing.

I can't believe you don't like this movie!
I was shocked at how much I enjoyed it... I am a fan of mean spirited films though...

Great post and the poster is super EC. I didn't notice until I read that line.

Yeah, Mother's Day isn't a total wash-out for me, it's just not a movie I really care for. Still, the poster is a thing of legend as far as I'm concerned.

I am glad I inspired you Sir Jenke!

I wrote a whole paragraph about the memories brought back by seeing the box art/poster for Mother's Day and I scrapped it for length. Thought I would just save it for another post, but it seems to be an image that inspires memories form more than just me as a horror film fan...wish I left it in now!

It really does represent an era in film that has long past. An era that I think most of us miss in many ways.

But, I completely agree that there is still many a great horror film to be found these days, whether it be the rare theatrical gem, or any one of the many independent or foreign DVD releases over the past half decade or so.