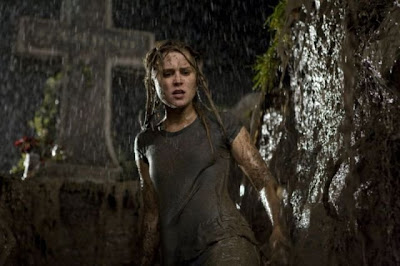 As Sam Raimi's highly-touted Drag Me To Hell fades from movie theaters after three weeks in release, the question some are asking is why wasn't this wasn't a bigger hit. It's done well, sure, but not the kind of business that some had expected it to. After all, Drag rode into theaters on a near-unanimous wave of praise from both fans who had seen the film in its several showing at film festivals as well as from critics (it's listed at 93% fresh at Rotten Tomatoes). And yet it's done moderate business, at best - far less even than some other recent horror offerings that lack the same kind of pedigree. But while it doesn't seem right that a film as shoddy and graceless as The Unborn should out-perform Drag Me To Hell at the box office, all things considered it really shouldn't have been such a shock.

First of all, the timing of Drag's release was terrible. Even though horror in the summer isn't as iffy a proposition as some make it out to be, it's still not smart to open opposite the new Pixar film. That's a good way to get crushed right there. But the real problem is that when it comes to horror, Raimi's sensibilities are still too quirky for general audiences to roll with. What's seen as hilarious to Raimi fans just plays as corny to most people with the negative comments I heard about Drag being almost exclusively along the lines of "I couldn't tell whether it was supposed to be funny or scary!" Scream-type irony is pretty easy to recognize but Drag's brand of splatstick, veering wildly from gross-out gags to serious character moments, is more problematic. A movie like The Uninvited may be completely bland but it isn't confusing to anyone and some people do appreciate that - they don't have to wonder if they 'got' it.

Of course, you'd think that the people who supposedly "get" Raimi - you know, horror fans - would've been out in full force to support Drag and ensure that Raimi's return to the genre cleaned up at the box office. But if you're waiting for horror fans to make a movie into a blockbuster, good luck with that. Whenever a film comes out that you might think would galvanize horror fans to show their support, it doesn't. Where were the fans at when Land of the Dead came out, or Grindhouse, or The Mist? No matter what you might think of those films, horror fans ought to have been storming the gates to check them out on opening weekend. Apparently, though, horror fans were feeling apathetic about the prospects of a new George Romero zombie film, a double-feature of exploitation films from Quentin Tarantino and Robert Rodrigeuz, and the long awaited adaptation of one of Stephen King's most popular novellas. I mean, even the fucking shitty Shutter remake made more than these films - so clearly catering to what horror fans say they want is a losing game.

Thankfully, even if Raimi's return to horror wasn't seen as an event outside of his fanbase, it didn't tank, either. And the fact that Raimi spent some of his Spider-Man clout adding one more cult favorite to his resume is damned cool.
Posted by Jeff Allard at 10:15 PM

Maybe lack of movie star recognition hurt this film with mainstream audiences. Say, if Raimi had been able to cast someone like Natalie Portman or the recently red-hot Kristen Stewart that are more marquee names than Alison Lohmann that might have brought more people into the theaters. Of course, that would've cranked up the budget too.

I don't know - Ellen Page was originally cast as Christine and then dropped out. Who knows if she would've been enough of a name to pull people in. I kind of doubt it. The actresses you mention are probably much more of a draw. But I think the bigger problem with Drag is just its tone. If Raimi made a horror film where he dialed his usual style back a little, he'd get a better response - but then that wouldn't be much fun for his fans.

I wonder if the positive reviews didn't actually damage the film's performance.

Most of the reviews I read praised Raimi's now decades old horror flicks, dismissed his newest works, and basically told readers that it was a Raimi fan's wet dream.

Consider that young people are still a major force in driving horror film success. Nobody under, say, 25 is likely to have ever seen a single Raimi horror film in theaters. The bluntly nostalgic tone of the reviews, combined with their tendency to dismiss the works these young folks might be familiar with, may have seemed off putting.

If I wasn't already familiar with Raimi, I think I would have written the whole thing off as some sort of insider/hero worship exercise and given it a pass.

The widespread use of the "Evil Dead 4" label is a prime example: Who except those who have seen ED 1 through 3 would care?

Yeah, the reviews may have worked against the movie in some ways. By making it sound like this was one for the Raimi fans, and that you had to be in that clique of Evil Dead lovers to appreciate it, these review might not have done much to convince the average movie-goer that Drag Me To Hell was for them.

With the horror crowd itself, I wonder if the good reviews were taken by some of the hardcore horror nuts as an endorsement of Raimi by "the establishment" and that, coupled with Drag's PG-13 rating, that Drag wasn't really a horror film for the fans. If so, that close-mindedness is frustrating.

While there's no way of knowing what percentage of "horror fans" do or don't turn out for films, it's interesting that films that seem to create so much excitment in the horror community come out limping at the box office while films that generate so much disdain - name any remake or sequel, for instance - usually come out and destroy. There's a whole group of people who make films like A Haunting in Connecticut into hits and you'd think that if at least a decent percentage of that audience really followed the genre that a film like Drag would be a hit as well. The fact that things never go that way makes me wonder who that larger audience is and how they decide what horror films look worthwhile to them.