Once Upon A Midnight Dreary 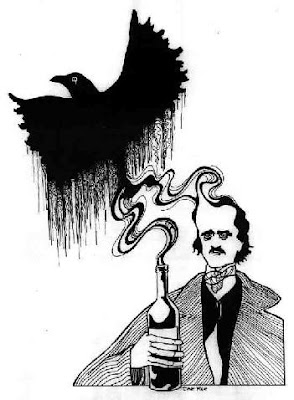 Here's a high concept for you: Edgar Allan Poe's "The Raven" meets Se7en. That's how director James McTeigue (V for Vendetta) is describing his latest project. Written by Hannah Shakespeare and Ben Livingston, The Raven is a fictitious (natch!) account of the mysterious last five days of Poe's life in which the tormented author becomes embroiled in the hunt for a serial killer who's committing murders based on his writings. This is so awesomely cheesy (and so reminiscent of Argento's Poe-tacular Two Evil Eyes segment "The Black Cat", which I love), that I need to see this movie NOW. I can already imagine The Raven's grisly highlights: a murder by pendulum blade; someone with their heart removed; a death at the hands of an orangutan; and several premature burials, of course - including at least one victim sealed behind a wall.

And let me just say now that I'm seriously hoping that someone during the course of the film will be pecked to death by a raven. Even though that's not something that's found anywhere in Poe's writing, I believe in this case that the filmmakers ought to be encouraged to take some much-needed artistic liberty. I mean, as Bart Simpson pointed out in the first Treehouse of Horrors, the poem "The Raven" is pretty tame ("You know what would've been scarier than nothing? ANYTHING!"). That raven has got to do a lot more than sit on a pallid bust of Pallas to impress the Saw generation, you know? Oh, and please - can at one of the murder sites there be the word "Nevermore" scrawled in blood on the wall?

God, I'm so excited for this! As far as I'm concerned, The Raven has all the tell-tale signs of excellence. It's already beguiled my sad soul into smiling.
Posted by Jeff Allard at 8:10 PM

Quoth the FilmFather: "Bring the gore!"

That was terrible. O pity me, miserable wretch that I am... :)

This does, in fact, sound excellent. Thanks for the heads-up!

No problem, J-Astro - can't wait to see who they cast as Poe!