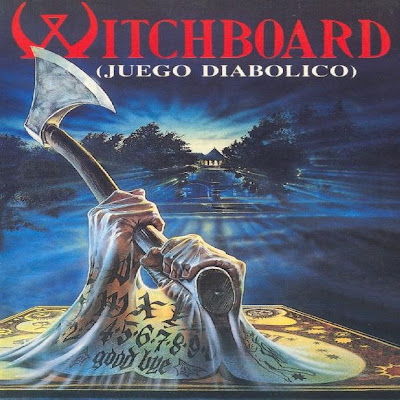 I would've thought that after Regan MacNeil claimed to speak to "Captain Howdy" via her Ouija board in The Exorcist (1973) that enterprising filmmakers would've instantly recognized this popular conduit to the spirit world as a ready source of trouble. Surprisingly though, it wasn't until 1986's Witchboard that the Ouija finally got its full props as a horror movie prop.

Even though it would've been easy - especially in the '80s - to slap together a scenario involving careless kids channeling the wrong spirit, writer/director Kevin S. Tenney took a more researched approach. For all I know, Tenney could've been pulling everything out of his ass but Witchboard appears to be earnest about serious about schooling the audience on the dos and don'ts of the Ouija - it isn't just treated as some phony MacGuffin like the Necronomicon in The Evil Dead (1982).

Tenney uses the character of Brandon Sinclair (Stephen Nichols) as the film's resident occult expert to walk the audience through the proper usage of Ouijas. One of the first scenes in the movie has Brandon giving a group of mostly drunken partiers a starter's guide. As he explains: "For the best results, the ouija should be used by two people, preferably a man and a woman, and it shouldn't be sitting on a table, it should sit on our knees so there's as much body contact as possible. Also the two people should have clean, pure systems so that the energy flowing through us through the planchette is as strong as it can be."

That's a lot more than I ever knew about Ouijas before seeing Witchboard, I can tell you that! It could be that all that info is on the boxes that they sell Ouijas in but I kind of doubt it (although at the very least they must tell you that the triangular object that the spirits guide across the board is called a planchette). No, I think Tenney actually had to go look this shit up - and this was back when researching a subject didn't just mean googling it. For a guy making a low-budget horror movie, Tenney really went the extra mile! 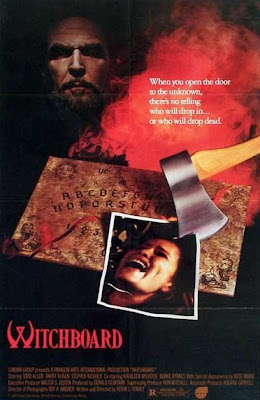 After the party - and the Ouija demonstration - takes a sour turn thanks to a heated exchange between Brandon and his former best bud Jim (Todd Allen), Brandon leaves in a huff and makes the mistake of leaving his Ouija behind in Jim's home. While the Ouija is temporarily in the care of Jim's live-in girlfriend Linda (Tawny Kitaen, of Whitesnake video fame), she breaks the number one rule of the ouija board and uses it alone, allowing herself to fall under the influence of the spirit of a child named David. Linda's growing obsession with the Ouija is referred to by Brandon as "progressive entrapment" and he tries to convince Jim, the hard-nosed skeptic, that Linda - and everyone around her - is in danger. You'd think this would be easy to do as people around Jim and Linda start to die in almost spectacular ways (the creative deaths that Tenney is able to realize on his meager $1,000,000 budget don't quite rival those of The Omen - even though one death via falling sheet rock is a memorably well-timed shock) but Jim's long-standing issues with Brandon make it hard for Jim not to think that Brandon is just jealous of his relationship with Linda. This bitter relationship between Brandon and Jim proves to be the heart of the film.

While it was common in the wake of the slasher trend of the '80s for directors to insist that their film wasn't just a slice n' dice picture and that their film didn't just have cardboard characters getting dispatched in innovative ways, that talk almost always proved to be just talk. Witchboard, however, really is a movie with (at least two!) fully developed characters as in their efforts to protect Linda, Brandon and Jim are forced to come together and deal with the issues that wrecked their friendship. Intriguingly, Tenney doesn't make it obvious from the start which of the two men - if either - is the more sympathetic character. Early on, Brandon seems like a high-handed prick and Jim an unassuming everyman but as the film goes on, it's not as clear who we ought to side with as Brandon starts to show much more humanity and Jim reacts to conflict and confusion by coming across as a flippant jerk. Kitean is never more than just eye-candy (she's often seen in negligee and there's an obligatory shower scene as well) but Tenney makes Brandon and Jim into the kind of thought-out characters that seldom appear in horror films.

I can't say I ever thought Witchboard was anything great (it could've benefited from more atmospheric direction - the movie suffers from looking overlit) but compared to the glossy, overblown nonsense that too often passes for horror these days (I'm looking at you, Platinum Dunes!), it comes across as a winning effort. And I'm still fond of the punk rocker medium (Kathleen Wilhoite) who practices her quirky brand of "psychic humor" before taking a fatal dive on to a sun dial.

To use the customary sign-off after using the Ouija: "Good-bye."

Nice! Way to show some love for a solid 80's horror film! I watched Witchboard a bunch when I was a kid and I loved it, and I still do. It does suffer for the reasons you mentioned, but it succeeds for the others things you went over, and that is what makes the film a good viewing even now.

Also, I am not sure what was more shocking - the sheet rock death itself - or the badass sunglasses homeboy is wearing before he gets rocked, by the sheet rock!

Ha, those sunglasses are the bomb!