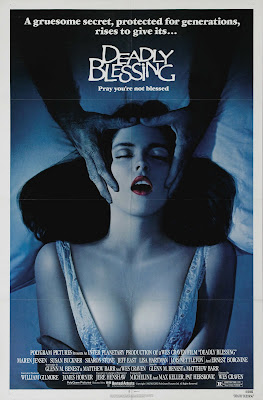 When I was in junior high, I had a friend whose parents were way more permissive than mine when it came to R-rated movies. I couldn't even see them on cable but this kid saw all the new horror releases on the big screen. When we got together at the beginning of school in the fall of '81, the first movie I asked him about was Deadly Blessing. The TV spots and newspaper ads for it had terrified me over the last month of summer vacation and I had to know if I was right to be pissing in my pants over it. Having gone to the drive-in to see it with his parents, he assured me that it was one of the best horror movies he had ever seen, reserving high praise for the spider-in-the-mouth dream sequence. 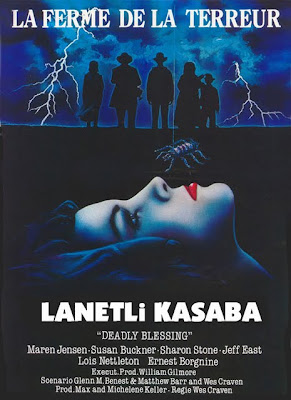 When I finally saw the movie for myself on VHS, I was not disappointed. It remains such a terrific shocker (rewatching it just the other week, there was a 'gotcha' scare involving Sharon Stone's character in a barn that 'got me' so badly - even though I knew it was coming - that I damn near sprained my neck!) and it's such a key movie in Wes Craven's filmography (bringing dream imagery into his work in a big way) that I'm puzzled as to why it hasn't been given a Region 1 DVD release.

Whatever the reason for its absence on disc, here's hoping that one day it'll get the exposure - and the wider fanbase - it deserves.

I beg your pardon, but in the trailer, was that a body exploding?

My older brother somehow got me into this one (I think he knew a kid that worked at the theater) The shock ending (which I think Craven was against doing) scared the daylights out of me. I was reminded of it again recently watching "Drag Me to Hell" which ends on a similar note. -Unk

Unk, I never would've made that connection but you're right - they are similar. I've also read that Craven was against that ending but it sure gives the movie a memorable send-off!

I waited YEARS to see this, and a few years back my bro and I finally found a battered VHS copy and popped it in.

What a crazy movie. Crazy doesn't even do it justice. This movie is competely batsh** insane! I love it...and can't wait to watch it again someday to review for our site. It's also got one of the best VHS covers ever!!
-Billy

I agree, the VHS cover is sweet. Unfortunately, I know that when it does come to DVD eventually, they'll go with some lame photoshop job over that classic poster art.

Yeah, this one is a keeper. Very underrated but hey, you've got a creepy Ernest Borgnine thrown into the mix as well. And, if I'm not mistaken, isn't Michael Berryman in it too?

Plus, it is such a time capsule piece -- seeing Sharon Stone so young! heh.

It's funny that Sharon Stone is the one actress of the Deadly Blessing bunch to go on to have so much success. I thought Susan Buckner had the appeal to be a big star. And you're right, by the way - Michael Berryman is in this.