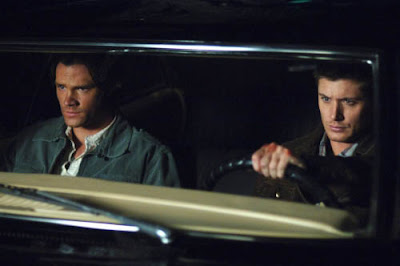 "Endings are hard," as the character of Chuck the prophet says in "Swan Song," the concluding episode of Supernatural's fifth season. Throughout the episode, show creator Eric Kripke was clearly using Chuck's voiceover narration as an authorial stand-in to express the daunting challenge of wrapping up five year's worth of monster hunting, demon slaying, heavenly discord and brotherly drama in a one hour episode. Even though Supernatural's success led CW to renew it for a sixth season, in order not to betray the trust of longtime fans, last night's season ender had to make good on creator Eric Kripke's promise that he had envisioned the show as a five-year arc. As the credits rolled on "Swan Song," I felt relieved that my faith in Kripke had not been misplaced. On a side note, I love that the entire episode's budget went towards getting the rights to Def Leppard's "Rock of Ages" for a key climatic moment. I don't know what the price tag was on that song but as the final epic showdown between Lucifer and Michael was so cost-conscious that it had to be limited to a cemetery in the middle of nowhere, I'm guessing it was more than Supernatural has ever paid out for a song in its history. I say it was worth it, though.

That "Swan Song" was such a solid closer came as a double-relief for this fan. First, it redeemed the most wobbly season in the show's history. While Season Five was not without its share of top-shelf episodes, it was by far the most unsteady year in the show's run. Previously, the show's writers and producers deftly jumped back and forth between the mythology episodes and the done-in-one "monster of the week" shows but this season, episodes where the boys were sidetracked from the looming apocalypse to hunt, say Paris Hilton as a shape-shifter, frequently felt shoe-horned in. At the same time, too many of the mythology episodes ("Dark Side of the Moon," in particular) felt like they were just marking time until the finale. Kripke had his endgame planned but for the sake of having a full season he had to noticeably dawdle for time on the way there with too many patience-trying bouts of Sam and Dean doubting each other, then getting back on the same page again, only to slip back into being at odds on how to prevent the apocalypse. Thankfully, the finale was able to put the herky-jerky quality of the season to bed.

Secondly, the success of "Swan Song" was proof that Kripke hasn't just been jerking the chain of the audience for the past five years. As much as I love The X-Files, it still fries me that Chris Carter didn't have any clue on how to pull his show's convoluted mythology together (I bailed on Lost in Season Three for fear of getting taken in the same way twice - a decision that now looks like it was a smart move). Kripke, however, really did know how his story ended rather than just fudging his finale.

My biggest fear going into "Swan Song" was that the task of concluding the show's ongoing storylines would be compromised by the need to set-up next season. Thankfully, Kripke gave the series some closure while leaving the door open for more stories with the Winchester brothers. "Swan Song" could easily have served as the final episode in the series as by the hour's end, this chapter of the saga of Sam and Dean Winchester has been properly shut - although as Chuck says, "nothing ever really ends."
Posted by Jeff Allard at 4:08 PM