3 Humans, 1 Tract, And A Multitude Of Banner Ads 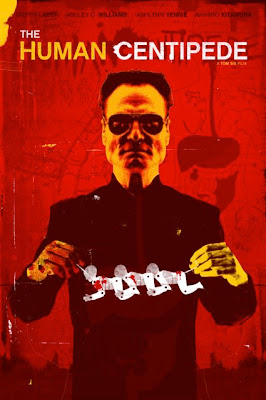 When banner ads for the DVD release of director Tom Six's notorious mad science tale The Human Centipede first appeared on several of the movie sites I frequent, I paid them no special mind - outside of idly wondering if I'd ever get around to watching this tale of a sicko surgeon with too much time on his hands (I probably won't). But the more I kept seeing them, with their animated diagram of three people on their hands and knees joined in the manner that the film's title promises with the accompanying text of "3 Humans, 1 Tract," it occurred to me that these ads - in which there's even a helpfully illustrative arrow that enters through the mouth of the first person, and moves all the way out the ass of the last person (see below) - were a hell of a thing to be blasé about. I mean, I know that I'm pretty desensitized but when did so much of the rest of the world go down that path, too? 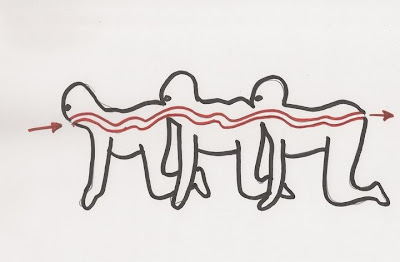 Years ago, a movie like The Human Centipede would've only been known - and whispered about - by the most hardy and dedicated connoisseurs of the bizarre. Only by patronizing the seediest of theaters or scouting the bootleg tables at conventions would one ever come across the likes of The Human Centipede. This is a film that once would've had to fight to exist and then fight even harder to reach its audience. Now it's a freak show that's as easy to obtain as clicking on an ad. You don't have to actively seek this stuff out anymore, you don't even have to be a knowledgeable movie junkie to be aware of it. Someone going to Shock Till You Drop to check out the latest news on Breaking Dawn can be instantly introduced to The Human Centipede. And if you don't buy it online, you'll see it stocked in plain sight on your next trip to Best Buy, or Target (for more on that, check out this recent post from my fellow Horror Dad, Dennis Cozzalio, over at Sergio Leone and the Infield Fly Rule).

I grew up during a time when slasher movies were regularly targeted by angry picketers and were the subject of offended screeds by movie critics. Now, apparently, you can make a movie where people have their mouths sewn to other people's asses and it's no big deal. This doesn't outrage me, it just astonishes me.

Once upon a time, The Human Centipede would've been a strictly underground sensation. Now you can get it out of a Redbox at your local supermarket. What used to be only fit to exist on the outer fringes of cult culture is now part of pop culture. I never would've imagined that a movie like this would be made - and so widely available - with barely a peep of controversy but now I have to think we're not too far off from seeing Human Centipede: The TV Series.
Posted by Jeff Allard at 2:40 PM

Email ThisBlogThis!Share to TwitterShare to FacebookShare to Pinterest
Labels: The Human Centipede

I saw this for sale at Target, in the new release section, right above Marmaduke. I can't find "The Funhouse" at Best Buy, but I can find this at Target on an end cap. Cheers to a marketing department somewhere.

Well, finding any kind of decent selection of catalog titles is impossible now at chain stores like Target or Best Buy. The horror section at BB is pathetic. There's a smattering of the After Dark movies, some Rob Zombie abominations, and some of the big franchise titles.

As for Human Centipede, I just find it funny that something so appalling is so readily available, and rubbing shoulders on shelves with family fare. It used to be that fans would have to hunt down controversial films like Meet the Feebles or Combat Shock - it was a matter of waiting for the next horror con to roll around and hope that a dealer would have a dub - but if those films were released today, you could instantly get them through Amazon or pick 'em up at Target. On Blu-Ray. With extras. How times have changed!

I have to agree with you. I liked the movie, but to market it to the mainstream is just ridiculous. I saw it at a midnight screening, and that's exactly the way movies like this should be seen.

I'm fine with the film coming out on DVD and Blu-Ray, but it really shouldn't be marketed as just another horror movie. Not only is that unfair to some poor unsuspecting Target customer, it's unfair to the film's true audience. Without that aura of the forbidden, a lot of the fun in seeing a movie like this just evaporates. It's not an experience any more, just another product.

My friend wrote the other day to tell me she rented this out of her trusty neighborhood Redbox...

Meanwhile I'm searching all over for a DVD copy of The Reflecting Skin.