A New Stab At Halloween 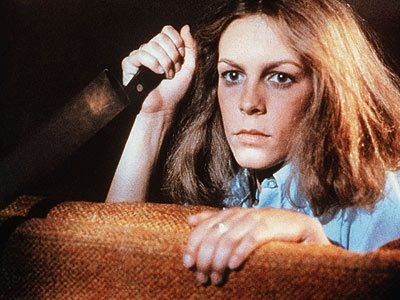 This Halloween, I decided to do something really novel - watch Halloween. Yes, that Halloween. I know it's traditional to watch John Carpenter's classic at this time of year, what with it being the Halloween season and all but I usually forgo it. I mean, it's just too easy. I always feel that horror fans should dig a little deeper for their scare fare - even if it's just a little deeper into the Halloween franchise.

That used to mean reaching for Halloween III: Season of the Witch but in recent years even that once-reviled title has become a favored seasonal staple among fans. With little place left to go for hidden gems in the franchise - and believe me, I've even tried (and thankfully failed) to get on board with Halloween: Resurrection - I decided to stop making my life needlessly difficult and get back to the original for the first time in, well, I don't know how long.

I couldn't tell you what year it was when I last watched Halloween (somewhere in the mid-'90s) but I'll never forget that I first watched it in 1981 on its broadcast premiere on NBC. It was this showing right here:

In 1981, Halloween was part of recent history. Now it's older to today's kids than 1951's The Thing from Another World and 1956's Forbidden Planet were to Tommy Doyle and Lindsey Wallace in 1978. What I'm saying, basically, is that Halloween is fucking old. Far older than even seems possible. But then I see Jamie Lee Curtis on TV hawking yogurt to help mature ladies like herself poop properly and I'm like, yeah, a lot of time has gone by. Totally.

It's sometimes hard to find new things to notice, even in great movies, once you've seen them so many times but on this latest viewing of Halloween, one moment in particular caught my attention. At the end of the opening shot, after Michael is unmasked, his parents just stand there as the camera pulls back. His mother even calmly puts her hands in her coat pockets - talk about keeping a cool head! 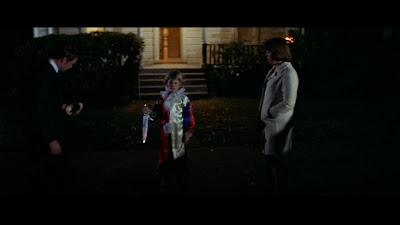 Normally, when parents discover their six year old son holding a bloody butcher knife, some immediate action is called for. Taking the knife out of his hand, running to the house to see who - if anyone - was injured, that kind of thing. But Carpenter had his actors hold their positions as the camera pulls up and away from the scene. 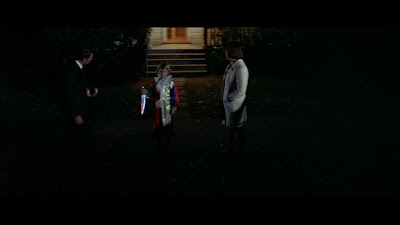 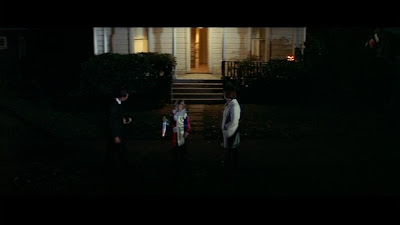 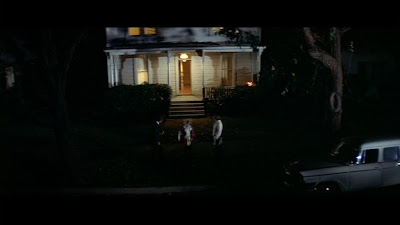 Up front, Carpenter is telling us that he isn't interested in depicting reality. This isn't cinema vérité - it's a fantasy, a fairy tale. This archly artificial composition makes all the subsequent leaps we have to take in the rest of the movie possible. It signals the difference between a movie where we're listening to Donald Pleasence as the voice of reason rather than Simon Oakland. By the end of the film, Dr. Loomis' crazy talk has been proven 100% right and that Michael really is the boogeyman but from the start, Carpenter has put us in a heightened, subtly stylized world where that conclusion fits without question.

Another shot I've seen dozens of times but only now perceived something different about is the sight of Annie's body on the Wallace's bed with Judith Myers' grave. 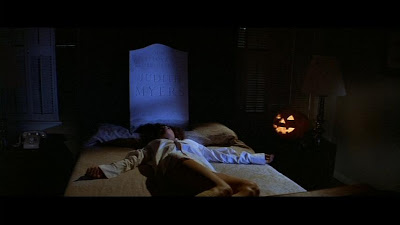 This is an iconic image and yet it only registered with me on this latest viewing that not only did Michael pose Annie on the bed and not only did he display Judith's stolen headstone but before all that the sick freak made the bed. After all, this is the same bed where Lynda and Bob just contentedly fucked. 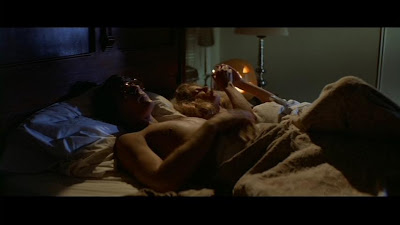 The simple explanation as to why Michael would do this is that Carpenter just thought the shot would look better that way. That's the pragmatic answer. However, this is a movie that Carpenter himself as described as about "the revenge of the repressed." Laurie, Michael - and even possibly Loomis himself - all have issues along these lines. Michael, especially, is not cool at all with the idea of sex.
Given that, it isn't such a stretch to regard that well-made bed as being symbolic of his severe pathology. What says "repressed" more than a killer that displays a corpse but is first compelled to smooth over all evidence of other "dirty" deeds?

In regards to Laurie, Halloween's repressed heroine, it occurred to me during this viewing how different this character was from the other horror movie roles that Jamie Lee Curtis went on to play. It's commonly assumed that Curtis portrayed the same "good girl" in Prom Night and Terror Train, that she lived in both of those films because of her character's pure virtue. When Scream came out, part of the slasher "rules" that scripter Kevin Williamson made such a big deal about was that the virgin always lives but both Kim (Prom Night) and Alana (Terror Train) had far more in common with the extroverted Annie and Lynda than with the shy Laurie (just try to imagine Laurie doing a provocative disco dance in front of her high school classmates - hell, she'd have to be hypnotized to accomplish that).
These characters were outgoing (bordering on vivacious), popular, and had steady boyfriends. Clearly they were not wallflowers in the Laurie Strode mold. So without getting lewd or making crass accusations, I'll just say that I think that the cliché of the virginal heroine was broken early on in the slasher cycle and that slasher history, in this particular instance, may need some amending.
In no need of amending, though, is Halloween's prized reputation. It's an easy movie to take for granted (even for those of us old enough to remember a time before Halloween) but seeing it again has given me a renewed appreciation for the consummate skill that Carpenter and co. brought to what in lesser hands would've just been a movie about a thug with a knife instead of a movie that defined horror for a generation. It's so good, I think I'll watch it again next Halloween.
Posted by Jeff Allard at 6:56 AM

Great review. It is an amazing movie, and is my favorite, flaws and all. Something about it always connected with me, and here, years later, I can still be unnerved after watching Michael's mayhem.

One thing I noticed when I watched it again this year was the way the parents stood when Michael was unmasked at the beginning. And I began to wonder if they were his parents. I know, in the film it isn't thought of that deep, they just are Mr. & Mrs. Myers. But, they way they park in front of the house and are disconnected to Michael or what has just happened. I wondered if they were merely neighbors or friends passing by who, upon seeing their friends' son with a big knife, stopped to see what was up.

Another way to look at it is, if Michael has always been so solitary and dark, maybe his parents were used to his menace and strange behaviour and didn't feel connected to him deep enough to be overly concerned, yet.

I know, reading to much into things. But hey, I love this flick.

Since the 90s?! That's a long time! Halloween is, without a doubt, my all time favorite horror film, so I find myself watching it at least once every year or two.

Great post, and your findings are very interesting, especially the bed being made one. The thought that he would go to the trouble to make the bed to have a clean canvas to work with for his diorama of death, is pretty creepy in a meticulously psychotic way.

On a side note, I wish ads for horror movies being shown on TV were as awesome as they were in the 80s. I remember seeing the warnings for the televised version of The Texas Chainsaw Massacre, and being scared shitless by them!

Wings, some interesting theories there. I'm sure that Carpenter never thought that thirty-plus year later, people would still be debating the finer points of his low budget horror film!

Matt, you're totally right about the sorry state of TV ads. They used to be so cool - they made every movie look like an event. Now, not so much. Do they even show feature films on the networks in prime time anymore? And if they do, does anyone watch them?

Oh, and I love the phrase "diorama of death" - nice!

Hot damn, this is why I love you Jeff, taking a film everyone has seen and exploring new (and totally plausible) angles. Well done, good sir.

And don't worry about the recommendation with PA2. I planned on seeing it anyways. Thanks for posting your two cents. It's caused a good discussion.

Cool, glad to hear it. Bummer you didn't dig PA2 but you never know how you're going to feel about a movie until you check it out yourself.

Great observations! esp. the bed thing. Y'know, now that you think about it, it makes perfect sense that Michael would make the bed. After being institutionalized for so long, I'm sure he was used to "hospital corners" in regards to bed making and had probably it ingrained him over the years. What a neat freak! ; )