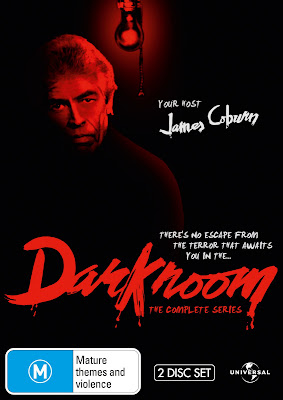 In honor of the recent DVD release of the classic anthology series Thriller, the duo of Peter Enfantino and John Scoleri have launched the A Thriller A Day blogspot to review each and every episode of the show. Along with the reviews, they've had some of the talent involved in the DVD release stop by to talk about all things Thriller.

One of those guests is writer/producer Alan Brennert who shares audio commentary duties with writer David J. Schow on the Robert Bloch adaptation, "Yours Truly, Jack the Ripper." A full time novelist these days, Brennert's past credentials include his work on the '80s revival of The Twilight Zone and the '90s The Outer Limits. But Brennert's biggest claim to fame - at least to me - is that he contributed to the short-lived horror anthology Darkroom (penning one of the best installments - the series' opening story "Closed Circuit").

For those unfamiliar with the show, Darkroom ran on ABC on Friday nights from late fall of 1981 to early winter of 1982 with James Coburn as the show's Rod Serling-esque host and lasted a scant seven episodes before cancellation. Unfortunately, despite the impressive talent that was involved - actors like Billy Crystal, Ronny Cox, Helen Hunt, Rue McLanahan, and David Carradine, directors like Rick Rosenthal (Halloween II) and Paul Lynch (Prom Night) and writers like Robert Bloch and William F. Nolan - Darkroom has never been given any kind of a home video release. But during Brennert's swing by A Thriller A Day, he casually mentioned this piece of information:

"By the way, after all these years Darkroom has just been released on DVD in Australia, the only video release of any kind it's ever had."

I was floored to read this and a quick check revealed that, indeed, an Australian home video company called Madman has given Darkroom a Region 4 release. While it doesn't appear that any plans are afoot to release the series elsewhere yet, the fact that it's finally been given a release somewhere makes me believe that sooner or later, it'll be issued on R1. The thought of Darkroom on DVD has always seemed like a pipe dream to me so I'm ecstatic to find that a US release isn't that far-fetched anymore.

Darkroom wasn't the cream of the TV horror crop but it was a fun show that deserves more appreciation. Even if it wasn't of the same caliber as '60s classics like Thriller or The Twilight Zone, it was the closest thing to them that the early '80s offered, serving up eerie tales that have stuck with Gen-Xers for decades - which is especially impressive given how seldom its brief run of episodes have been re-aired since their original broadcast. For the short few weeks it was on, I couldn't wait to see what developed in the Darkroom. Of course, back when the inimitable Ernie Anderson was doing the voice-overs on ABC's promos, as in the clip below, it was always easy to think you were in for something special:

You saw that offhand remark, too, I see -- I was just floored, and immediately had to Google it.

Coincidentally, I had just started watching DARKROOM episodes for this year's Halloween, obtained -- "through the usual channels", let's just say -- and was quite surprised at how well the show held up. It's no NIGHT GALLERY... I'm halfway through the episodes, and so far, there's no grand 'GOTCHA' that brands itself upon the brain to be talked about for years, but the adaptations are above average and the original stories are handled well, if just a bit predictable if you've read or watched this stuff for awhile.

I hope Universal will go ahead and release this in R1 eventually - along with that last season of NIGHT GALLERY... actually, a two-fer release would probably spur sales, now that I think on it some...

Sounds like a great idea! Too bad it'll probably never happen. I think Universal is done with Night Gallery - but you never know. And I'll keep holding out hope on Darkroom. If you're halfway through the episodes and nothing's jumped out as a big "gotcha" yet, it's not going to happen. The first five Darkrooms were solid and the last two just kind of petered out. But as you say, the stories are handled well. For TV horror, it makes the grade.

Thanks for this post--I remember Darkroom so clearly!