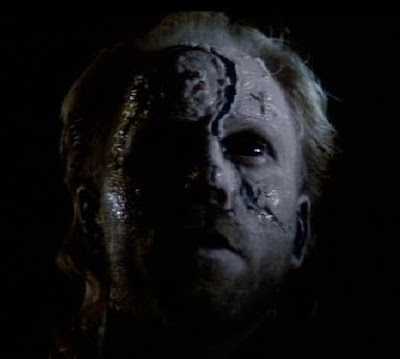 There's no William Shatner mask and no Rob Bottin FX but Prince of Darkness (1987) is a John Carpenter joint that is essential to my JC love. Although its title conjures expectations of a classic depiction of Satan complete with horns and cloven hooves, Carpenter went for the unfamiliar instead.

When an aging priest dies on the eve of a pressing appointment, a long-kept secret of the Catholic church involving 'The Brotherhood of Sleep' is revealed to a fellow priest (the much-missed Donald Pleasence). This secret hidden in the basement of the abandoned St. Goddard's church is so ghastly, and the importance of unraveling its implications so pressing, he must reach out to physics professor Howard Birak (the also much-missed Victor Wong) to help grapple with the enormous danger at hand.

Birak corrals a group of his brightest students (including Jameson Parker, Lisa Blount, Dirk Blocker, and Dennis Dun) to stay at the church for a weekend to study the mysterious canister of green, glowing liquid stored in the basement of St. Goddard's church and determine the nature of its swirling contents firsthand as well as translate an ancient book that records its history.

This examination will not prove to be an easy task - X-rays reveal that the canister is fitted with a locking mechanism that only can be opened from the inside, so no direct samples can be taken. Even worse is that everything about this liquid defies all accepted notions of science. As the contents of the container grow in power, it psychically extends its will and possesses the group of students and academics (as well as an army of street people, led by rocker Alice Cooper).

Written by Carpenter under the pseudonym of Martin Quatermass (in a nod to Nigel Kneale, writer of the Quatermass series), Prince of Darkness was the director's much-anticipated return to low budget horror after discouraging experiences with big projects such as The Thing (1982) and Big Trouble in Little China (1986). That he choose to play to his strengths and make Prince of Darkness a siege film in the manner of his acclaimed Assault on Precinct 13 (1976) is not surprising. What is surprising is the level of earnest philosophizing that finds its way into the script. There's a heightened, poetic quality to much of the dialogue - which Wong and Pleasence naturally prove especially adept at delivering - and the younger characters in this film (who may be college students but are still unusually mature both in age and temperament by '80s horror standards) are not just tested physically by their ordeal, but as they fight on through day and night, their accepted concepts of good and evil, of science, and of reality itself, are all proven to be wrong in a darkly-told case of finding themselves 'Through the Looking-Glass.'

Perhaps realizing that he was asking a lot of the horror audience's patience by subjecting them to involved discussions of religion, tachyon particles and quantum physics, Carpenter didn't pull any punches with the gore. The physical appearance of one doomed character chosen to rebirth the essence of evil undergoes a bodily transformation that makes the ravages Linda Blair suffers in The Exorcist look like a mild head cold. With this character's flesh entirely covered in glistening pus (with make-up FX courtesy of Frank Carrisosa), Carpenter achieves the kind of vivid, putrescent horror that would do Lucio Fulci proud.

It isn't all about being graphic, though. Embodying Prince of Darkness' apocalyptic vision is the recurring image of an eerie 'broadcast' transmitted from the future date of 1999 into the sleeping minds of the film's characters wherein we see a dark figure emerging from the church's entrance, its arms spread open as it steps across the threshold ready for its close-up. Shot on video, it's a haunting example of 'hand-held' horror that anticipates the faux-doc, shaky-cam approach popularized by The Blair Witch Project (1999).

Carpenter goes for low-tech scares in other ways, too. Years before Francis Ford Coppola adopted an old-school movie magic approach for Bram Stoker's Dracula (1992), Carpenter and his team utilized photographic tricks dating back to the days of silent film - methods pioneered by the likes of George Méliès (A Trip To The Moon, 1902) and cinematographer Eugen Schüfftan (Metropolis, 1927) - accomplishing the illusions of Prince of Darkness in-camera.

In preparation for this blog post, I had to ask myself "is there anything about Prince of Darkness that isn't awesome?" My answer to that was "No, damn it! HELL, no!" See, I could've just simply answered no there - especially if I was just talking to myself - but I went the emphatic extra mile because Prince of Darkness is that good. This is a much more overtly horrific movie than Carpenter's made before or since - jam-packed with nightmarish imagery (when someone who's body is crumbling as it's consumed from within by hell-sent beetles tells you to "pray for death," that's the ultimate sign that shit has gotten real). When I have the itch for classic Carpenter, more often than not, Prince of Darkness is just the (old) scratch to fix it.

* This post is part of John Carpenter Week at Radiator Heaven. Go there to check out all the Carpenter love you can handle!

"Perhaps realizing that he was asking a lot of the horror audience's patience by subjecting them to involved discussions of religion, tachyon particles and quantum physics, Carpenter didn't pull any punches with the gore."

Amen, my brother! I think that this film just was too ahead of the curve for a lot of people back in the day and weren't expecting this kind of a film. I love that mixes all these things up and still delivers the goods in terms of scares and gore. This film, along with THEY LIVE, showed Carpenter working as an indie filmmaker again and given more freedom he really pursued his muse to great effect.

There are so many things about this film I like but I actually really love the exposition scenes where they talk about physics and notions of religion, etc. The ideas they are tossing around are endlessly fascinating to me.

Thanks again for this fantastic post! Good to see such an underrated JC film gettin' some love!

A fine write-up! I agree that, philosophically, this is one of Carpenter's strongest. The man always loves to hit us with a doozy of an existential ending (from surfing into the great void in DARK STAR to uncertainties at the end of THE THING to the sweet, sweet laughter that closes IN THE MOUTH OF MADNESS), and the finale in PRINCE OF DARKNESS, once it sinks in, is quite possibly the most horrific. And the way he visualizes being trapped on the wrong side of an alternate, mirror universe is dazzingly evocative yet brilliantly simple- never was he a slave to the size of his budget!

J.D., thanks for giving me an excuse to bust out a Prince of Darkness post! And I do agree that going back to being an indie filmmakers gave Carpenter a shot in the arm. After They Live, he was supposed to do two more movies under his agreement with Alive Films but I never heard of what happened to derail those plans. It's a shame that relationship didn't work out as it spurred Carpenter to do some great work.

Sean, thanks! In some ways I look at Prince as Carpenter telling all the filmmakers who rode on his coattails with Halloween that having a low budget doesn't have to mean the only horror movie you can make is about a guy with a knife.

The first time I saw Prince of Darkness, I wasn't into it. But I saw it a second time on the big screen when Exhumed Films in Philly did a Carpenter night a few years ago, and it made all the difference and I was won over. I found the ending in particular to be very effective and creepy.

More appreciation for PRINCE OF DARKNESS! I love it! Low budget or not, as you mentioned it was not afraid to introduce an existential or scientific underpinning in its story or horror. Even with that against (for many critics and some Carpenter fans it is), this film delivers. When viewers stay with it, and not dismiss its heady concept, man oh man does it deliver by its finale! Great contribution to this blogathon. Thank you for this, Jeff.

Sarah, it seems like a lot of Carpenter films take a repeat viewing or two to really make their impact. Funny how that happens. Probably not as funny to Carpenter, though, who always has to wait a few years or more for his movies to be rediscovered as cult classics!

Leopard, thanks! Always great to hear from another PoD fan!

Jeff, I have so much love for this film and you outlined many of the reasons perfectly. What a great downer ending, great siege scenes, intelligent story, and that soundtrack! Oh my, wish JC could get back on track, but I'm hearing early reports of The Ward being terrible.

I've heard both sides on The Ward - some saying that's its a tired effort and some saying that it's a respectable mid-range JC movie. We'll see. Every one of his movies has been trashed at first so it's hard to go by reviews. I'll be hoping for the best, though.

I completely agree - there is absolutely nothing about Prince of Darkness that is not awesome! Nice to see so many people coming out in support of this film!

It took a couple viewings for me to appreciate this film, but my lord it is a doozy. The bug infested ma delivering his message may be my all time favorite Carpenter moment.

Chris, Mike - thanks guys! Glad we're all seeing eye to eye on PoD! And I neglected to say so in the write-up but I think that PoD boasts Carpenter's best score, even if it doesn't have the same iconic quality of Halloween. Those with more musical knowledge than myself could describe its technical merits - all I know is that to my ears it's an incredible score.