Shadow Of The Vampire 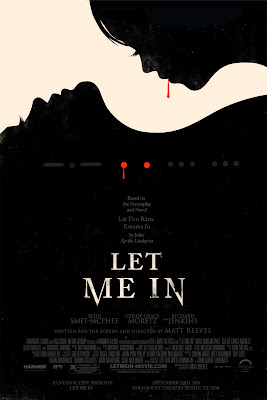 The fact that a new vampire film is in theaters that isn't part of the Twilight saga ought to be cause for celebration. But for many it's a problem that Let Me In - a remake of the 2008 Swedish film, Let The Right One In - exists. After all, Let The Right One In is a very recent film - not some dated classic. And if people were not so reluctant to read words at the bottom of the screen, one of the best genre films in recent memory would not need to be retold.

All this is true. In a perfect world, studios would look at a movie like Let The Right One In and say "man, we'd be assholes to try and touch this." And in a perfect world, there'd be no hesitation on the part of the average moviegoer to sample foreign fare. But we don't live in that perfect world. If Let Me In introduces a wider audience to a great story, then I don't see the need to disparage it as a matter of principle. When the remake is atrocious, as in the case of Pulse (2006), the abomination masquerading as a remake of Kairo (2001), then yes - that's bad. But when the remake is as finely made as Let Me In, then why be high-handed about it?

While Let Me In does nothing to eclipse the artistry of Let The Right One In, writer/director Matt Reeves has attentively preserved the tone of the original. It's still a melancholy look at a lonely, bullied kid who finds a lifeline in the form of a vampire. Only now instead of Oskar (Kare Hedebrant) and Eli (Lina Leandersson), it's Owen (Kodi Smit-McPhee) and Abby (Chloe Moretz) who develop a strange, sad bond. And instead of taking place in Stockholm, we're in New Mexico. It's still 1983, though, and it's still in the dead of winter.

The major story beats and set-pieces are all pretty much the same as in director Tomas Alfredson's film - even down to the way they're staged. But it feels as though Reeves is honoring Alfredson's work rather than just mimicking it. Reeves does bring in some new scenes and tweaks a few existing ones. He also prunes some of the extraneous story elements from the original, making for a more efficiently told tale. From the start, there's a palatable sense that Reeves "gets" the original - and its source material novel - and that in his hands, Let Me In was never in danger of becoming the movie that fans feared it might be.
However, there are some ways in which the remake just can't compete. As strong as the child performances are here, it's difficult for Smit-McPhee and Moretz to surpass the work that Hedebrant and Leandersson did in the original. Those two kids - Leandersson, especially - just had a look and vibe that can't be duplicated. Smit-McPhee and Moretz are outstanding but as you watch them, you're looking at actors. Skilled actors, yes, but still actors. There's an inevitable (if faint) air of Hollywood to Let Me In. When you watch Leandersson as Eli, you easily buy into the reality that this girl (or whatever) is a vampire. With Moretz, you're seeing Hit-Girl as a vampire. That's not enough to derail Let Me In but it's one reason why it can never have the unique mystique that the original does.
Let Me In is also less enigmatic than the original, with Reeves choosing to be more explicit about the relationship between Abby and her caretaker (Richard Jenkins) than Alfredson and novelist/screenwriter John Ajvide Lindqvist were about the relationship between Eli and her caretaker (Per Ragnar). I thought that this tragic pairing of young and old (or rather old and very old) was one of the eeriest and most affecting aspects of the original but it wasn't clear to every viewer what the nature of that relationship was (was this man Eli's father, or perhaps a pedophile?). By including an old film strip from a photo booth capturing Abby side by side with her guardian when he was just a boy himself, Reeves confirms that this person came into Abby's life decades earlier and has grown old as Abby's protector. Now the cycle is starting over with Owen.
There's so much that's wise about Let Me In that it's glaring when Reeves makes a bad decision. The single poorest choice on Reeves' part was to depict several of Abby's attacks and her gravity-defying movements through CG. It looks silly and I can't believe anyone connected with the movie thought it was the right way to go. It only occurs a few times but it's a few times too many. A secondary issue with the use of CG is that it makes Abby appear so capable and deadly that it makes us question why she would need someone to hunt for her. If Abby is so ferocious - moving like a Reaper from Blade II - then a companion doesn't seem so essential. And if we question Abby's need for a companion too strongly, that could derail the entire movie. After all, as with the original, Let Me In really isn't a love story. It's about Abby choosing someone that will serve as her protector and guardian. Reeves should've been more aware of the problems he was potentially creating before deciding to invite CG in.
Some slight missteps aside, though, fans of the original who wanted to guard a film they loved from the machinations of Hollywood should be relieved that Let Me In has emerged as a smart, sensitive movie. That it exists in the shadow of a better film shouldn't discount the excellent work that Reeves and his collaborators have done.
Posted by Jeff Allard at 3:16 AM

Thanks for this review! I see your point about the use of CG in Abby's killing scenes--I really wanted to like that part, but I guess it does stand out as CG. After reading the book last week and seeing the new movie yesterday, I think that the real need for the caretaker is because if Eli/Abby is allowed to kill on her own, she unleashes too much mayhem--she ends up creating other vampires that run amok in addition to the fact that she can't handle the everyday affairs while being vulnerable during daylight, so the adeptness at killing didn't contradict the need for the caretaker from my perspective, but I did find myself questioning why Abby couldn't clean up her own bodies.

Thanks for this great review!

Thank you for the great comment, Chad! Your reasons for Abby needing a caretaker/guardian are sound - although I would still argue that the CG is out of place and doesn't do the film any favors.

We are in pretty much complete agreement on this one. The CG is just so obvious that it disrupts the suspension of disbelief necessary in a serious fantasy film like this one. Other than that, I think Reeves did a good job, especially with tailoring some of the themes specifically to America.

I also liked the deliberate choice never to show Owen's mom clearly (let alone his dad). They're like Charlie Brown adults, only in a darker, more real way. At least Oskar got to spend some time with his dad, and his mom seemed to care. Owen truly is alone except for Abby.

I'm not too keen about Reeves' choice to not show the mother's face. I understand why he did it but it felt like a cutesy, overly "arty" decision. You know, it's a film school kind of thing - something to point out on the DVD commentary. But it's not a deal-breaker for me and overall I dug the movie.

It's nice to know this isn't a train wreck like the English-makeover of 'The Vanishing' or 'Pulse'... but I still think I'll stay away... for now.
I predicted to my friends that there would be some unnecessary CGI crammed in there... and the movie as a whole sounds less subtle.

Am I wrong or didn't the previous caretaker in the original story have a different origin... didn't join Eli as a kid but was in fact something of a paedophile?
I'm curious also if they changed the nature of Eli's ambiguous sexuality (castrated boy in the story) for the sake of homophobic American audiences... at least excising the scene that reveals the scars.

New reader (and already a big fan!) of your blog chiming in:

Great review, Jeff! I'd agree with just about everything you said. I'd go so far as to say that the original film is one of my favorites of all time, but I loved the remake. Maybe even a tad more than you did -- there's things I think the American version improved upon, and things I think were better in the original. Still, I think compared to most remake this one's just about perfect. There's just the matter of that pesky CGI, as you mentioned . . . .

I look forward to buying LET ME IN when it's released on DVD. So cool to see a remake handled with respect for the original film (and novel) that inspired it.


BTW: I also love Bob's comment about the director choosing to never show Owen's mom's face. That was really cool -- a brilliant way to show how distant Owen was from those who were supposed to be his true "loved ones."

James, thanks for the kind words - glad you like what you see here! As for Let Me In, I think the consensus is that it was a really strong remake - it's just too bad that it didn't find a bigger audience in theaters.