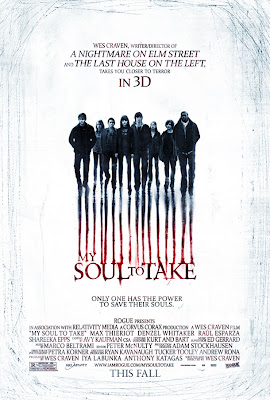 Denial plays a big part in my outlook as a horror fan. You can call it optimism, if you like, but denial is closer to the truth. Optimism is when you have no facts to go on but yet, based on a sense of faith, you still hold high hopes for whatever new situation you're facing. Denial is when you're given cold hard facts but choose not to put the pieces of the puzzle together.

You see, even when a movie has every sign of being atrocious, I convince myself that it might actually turn out to be good. I'm so adept at bending my head around reality that I'm ready to believe a movie that has been on the shelf for ages, gone through multiple reshoots, post-production 3-D conversion and a title change to boot might actually be a winner.

So even though Wes Craven's latest outing, My Soul To Take, fit all of the above criteria to a "T" and was also denied critics's screenings, I still figured that Wes wouldn't let me down. Having now watched My Soul To Take, though, I realize that I didn't have the one crucial piece of information beforehand that really would've told me what was up. I knew about the troubles with the movie, sure, but what I didn't know is that Wes Craven had totally lost his mind.
It's a big surprise to all of us, I know. I mean, he's produced two of the best remakes of recent years - The Hills Have Eyes (2006) and The Last House on the Left (2009) - so you don't think a guy like that is going to make a movie like My Soul To Take but there you go. It's a crazy world we live in, that's for sure.

Seriously, I don't even know where to begin with this one but here goes: a serial killer called the Riverton Ripper is found out by the police and killed during an escape attempt. On the night he was killed, seven children - including his own son - were born. Sixteen years later, these kids have to contend with the frightening possibility that the Ripper's soul may be living inside one of them.
I like the basic set-up. Unfortunately, Craven went off the deep end with the telling of his tale. The biggest problem is that no one in this film behaves as though they come from this planet. There's a disconnect from reality here that's just jarring. For example, at the high school, everything that happens is controlled by "Fang," (Emily Meade) an adolescent dictator who has her doting minions inexplicably following her every instruction - even down to administering daily beatings (referred to as "punitives" in the film) to those that Fang deems deserving. Fang is still in high school at age nineteen, by the way. This is usually the kind of person that would be roundly mocked as a loser, not be calling the shots. We're also supposed to believe that for a school show and tell session, two of the Riverton Seven - the troubled, possibly schizo, Bug (Max Thieriot) and his best bud Alex (John Magaro) - create an elaborate California Condor costume, one that's capable of spewing fake vomit and shit on their classmates. I know that at age 70 or whatever, Craven is a long way from his teen years but his bizarre - almost surreal - take on high school life is worrisome.

Then there's the issue of the identity of the Ripper, a mystery that's never engaging. Maybe because the movie is so full of nonsense, it never seems worth getting interested in unravelling the story. After all, how much can you care about what happens in a film when a blind character - Denzel Whitaker as Jerome - is able to make it unassisted to someone's house, climb a rope into a second story bedroom window, and fight the Ripper? We don't see any of this happen, mind you, we just have it related to us in a lengthy monologue from Jerome after he's been discovered severely wounded in the closet.
Listening to Jerome's credulity-defying (as well as dramatically inert) description to Bug of how he ended up in his closet, all I could think of is "why the hell is this character even blind to begin with?" Not only does Jerome's disability not play any role in the plot but thanks to Craven apparently not understanding what the hell "blind" means only adds to the sense that Craven is off his nut. Yes, I know that blind people are very capable and they can do a lot without any assistance but come on now. Maybe Craven got all his info on the blind from watching Daredevil, I don't know.
I'd like to be able say it's heartening that MSTT is the rare modern horror film with a real personality to it. As a bid to try and launch another franchise character there's some obvious market-minded thinking involved but yet this isn't the processed garbage found in a Platinum Dunes remake - it's evident that Craven is pouring some real spirit into his work. There's plenty of talk about the human soul and of good and evil and morality that make it clear that even after all these years of toiling in the genre that horror isn't just an easy buck for Craven. He cares, he respects his audience, and he's still putting a little of his deeper self into his films. This is the first original script he's penned since 1994's A New Nightmare and it fully bears his imprint. But then there's the inescapable fact that it's lousy.
Craven has always gotten into trouble the more metaphysical his material is. Down and Dirty is where Craven shines (The Hills Have Eyes, The People Under The Stairs). Anything Goes Craven (Shocker, this crap), not so much.
There's a germ of a good movie here but Craven never finds it past the clutter of his ideas and his faltering dramatic instincts. I did like some of the performances, Emily Meade in particular. But overall, My Soul To Take is just Too Much To Take.
Posted by Jeff Allard at 6:59 PM

Email ThisBlogThis!Share to TwitterShare to FacebookShare to Pinterest
Labels: My Soul To Take, Wes Craven

This is a bummer. Even the ads for this film had a faint whiff of desperation and this does not bode well for SCREAM 4 which has also been plagued by numerous production problems.

I read a recent interview in Horrorhound in which he singlehandedly convinced me to give the movie a shot. I'm glad I didn't.

Looks like you were just about the only one in the horror blogosphere who saw this over the weekend. You are a brave soul. I salute you.

J.D., after seeing MSTT it's hard not to worry about Scream 4. That's not a movie I had much excitement for to begin with but it'd suck for Craven to release two godawful movies back to back.

Cortez, I hate to let any theatrically released horror movie get by me. I probably haven't missed one since I've been old enough to see 'em on my own. That's about twenty-five years worth of movies we're talking about and I've gotta say that MSTT is one of the all-time worst!

Having said that, if someone out there dug the movie - more power to 'em!

Haha, even reading your synopsis is surreal.

I think you hit the nail on the head, and that's these old guys really need to stop writing for and about teens. Talk about out of touch. Doubly sad is that I watched those great documentaries on the original Nightmare on Elm Street DVD, and Craven had absolutely everything thought out perfectly. He's just lost all those really wonderful details in the last 15 years or so.

Every day I consider a matinee screening, and every day I read another review that convinces me to see something else.

I'd definitely recommend holding off until DVD for this, Chris. I love Craven - I'll even stick up for A Vampire in Brooklyn. But MSTT is the work of someone who seems a little (ok, a lot) out of touch with things. It's a bummer when an old-school guy like Craven gets to make a movie his way and have it get a wide release but this is what he comes up with. Survival of the Dead deserved to play more theaters than MSTT.

Totally agree, Jeff. Craven seems to have the most power for getting things done and is squandering it so badly.