Trick or Trailers: Halloween 6: The Curse of Michael Myers (1995) 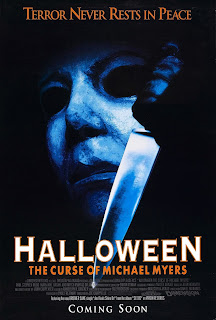 With subtitles like Revenge of and Curse of, Michael Myers, by his sixth movie, was beginning to have the air of an old-timey movie monster. While I don't think that there was much in the way of actual revenge in 5 and the "curse" is pretty vaguely defined in 6, just the same I'm just sorry that we never got to see a Son of or a Ghost of Michael Myers.

By 1995, fans had been left hanging for six years (!) to find out what happened after the mysterious Man in Black had blown Michael out of a Haddonfield jail cell at the end of Revenge.

The fact that we were finally going to get some answers was, in itself, cause for celebration. It was also just cool to have a new Halloween to look forward to. Horror had taken an extended downturn in the '90s with the franchises that had been box office champs throughout the '80s putting out last gasp final installments.

In what seemed like potentially promising news, Halloween 6 was arriving under the Dimension Films banner, the genre-specific division of Miramax Films that had already brought franchises like Hellraiser and Children of the Corn to theaters. Those movies might not have been good but, you know, at least it gave genre fans something to check out. And in the '90s, that wasn't anything to sneeze at, man.

And I gotta say, the first Halloween 6 trailer had me intrigued.

You've got an unusual vibe going on with cult members and what looks like a hint of some computer or internet stuff and a lot of talk about the mythology of Halloween and the promise of an explanation for Michael and, above all that, Loomis was back so, hey, even though I'm wondering why Michael Myers looks kind of paunchy now, I'm in!
Once it came out, though, 6 was greeted as a low point for the franchise, acerbated by the fact that Donald Pleasence had passed away before its release and this now had to stand as his swan song for Loomis. I mean, we know the filmmakers were put in an awkward position by the end of 5 but I don't know. Seems like a lot of this stuff should have been thought better of before it got off the ground. 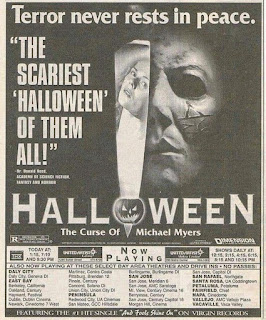 And recasting the part of Jamie Lloyd away from Danielle Harris and then dispatching this beloved character in such a cruel way...not great. But the idea of bringing Tommy Doyle back was an A+ move and even better was casting a pre-superstardom Paul Rudd in the role. That fact that Halloween Kills decided to bring Tommy back as well feels like a nice bit of vindication for 6 in that respect. They can always say they did it first! And while Anthony Michael Hall makes a for a solid Tommy, I dig Rudd's portrayal of him as a twitchy weirdo. 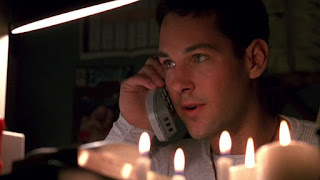 Overall, though, this was not a roaring return for the franchise. If anything, it seemed poised to finally tank it altogether. Rumors of a Producer's Cut fueled hopes that a better version of this movie might exist but it turned out that the different cut was not a miracle fix.

I gotta say, though, I've come to dig this a little more than I do 5. If only it had a better ending! It's crazy that both the theatrical and the producer's cut endings are totally unsatisfying but, oh well. Whaddya gonna do? Other than that, I've warmed up to how batty this one is.
For what it's worth, this is where the original continuity of the series ended. That alone gives it a special place in Halloween canon. After this, reboots would keep splitting up and rewriting the timeline that began in 1978. Given that, I think the fact that 6 made such crazy retcons to Michael's backstory makes it more fun in retrospect. It's much easier to enjoy all the Cult of Thorn nonsense as a one-off. 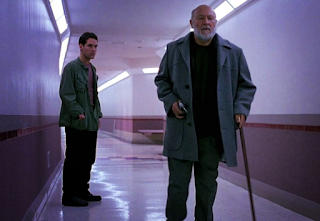 Or maybe just the fact that it didn't prove to kill the franchise is all it took for 6's "curse" to be lifted and allow it to be regarded a little more fondly. 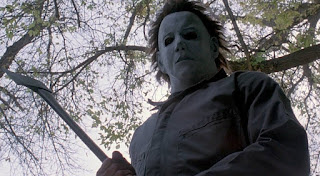 I have also had a roller coaster relationship with this one, for all the points you mention. But I do love the Fall atmosphere, it does feel like Halloween in Haddonfield. But editing is sometimes odd, and killing Jamie so violently is a hard thing to get past. Sort of like killing Laurie at the beginning of Resurrection. Not great.

Agreed, Joe. But there's still a lot I enjoy about this one!