Trick or Trailers: Halloween III Season of the Witch (1982) 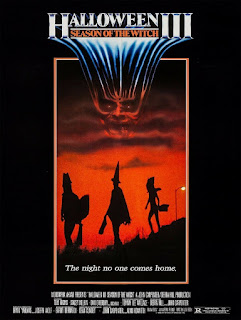 I forget when opinion eventually started to shift on Halloween III: Season of the Witch, going from it being seen as the bottom of the barrel to a highpoint of the series, but I do know that it's been this way for so long that younger fans, while knowing that it wasn't a hit, can't fully appreciate just how vehemently this movie was rejected.
A lot of movies bomb but this was something else altogether. This wasn't like, say, Cats where people laugh at what a turkey it is and move on. Or a dud like The Fog remake that is quickly shrugged off as a nothing movie. No, when I was in junior high, it was like "Fuck this movie." You didn't even have to see it yourself. You were just told it was the worst movie ever and everyone would immediately back that up, even if they hadn't seen it for themselves. The hate for III was so hardcore that there was no dissension. It sucked and we all knew it.
If there had been an internet back then, oh man. 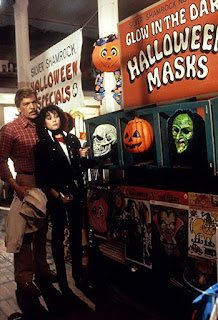 Now, of course, it's a different story. Now it's actually weird if someone doesn't like III, which just blows my mind. In the '80s, you couldn't have imagined anyone saying anything even vaguely favorable about Season of the Witch. If anyone had said in '84 or whatever that, "you know what's actually good? Halloween III?" they would have quickly found themselves upside down in a trash can.
But times change, right? 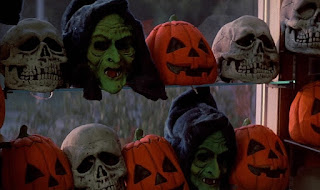 Fans say that they should have just called this Season of the Witch but I get why Universal wanted to brand it, for commercial reasons, as a Halloween film. What I don't get is why they did not do a better job - or any kind of job - of explaining what was going on.
Sure, there's no mention of Michael Myers in the trailer. There's no Laurie or Dr. Loomis but the Halloween III of it all supersedes that. That III says to audiences that this is the next chapter in the story. Of course they're going to feel burned when they don't get that. 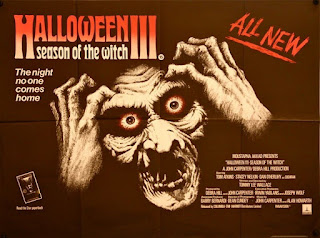 I love that III eventually came to be celebrated. I remember seeing it for the first time on TV while I was in college in the late '80s and thinking "Holy shit, everyone said this sucked but it's pretty awesome!" But I get the initial reaction. When I see documentaries about III on Shout Factory discs or whatever, I always wish that, aside from talking to Tommy Lee Wallace and Tom Atkins and so on that they talk to whoever was working in marketing at Universal back then. That's the story I really want to hear. I mean, really. You can put All-New on a poster and think that covers it but people are still going to look at that and think "Yeah, all new Michael Myers. Got it!"
Season of the Witch has enjoyed such a surprising rebirth that I sometimes wonder if it could actually spawn its own stand alone remake/reboot one day. I just wonder how they'd decide to sell it.
Posted by Jeff Allard at 10:30 AM

Crazy path this movie has taken. I remember watching as a kid and just being both in awe and scared spitless. Never hated this movie, just felt like it was so bizarre. Now I love it for what wonderful weirdness it gives to us.

Yeah, it's been a truly wild journey for III. I'm sure everyone associated with it was shocked when the tide finally started to turn for it.

III was 'Halloween' movie I saw, and I liked it a lot. I knew of Michael Myers but it was a while before I finally saw the original or any of its MM sequels... and I've never been a fan.

Oops... left 'the first' out of my comment... making it confusing.