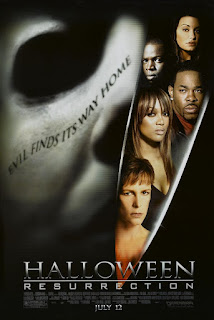 Oddly for a major franchise, the Halloween series has never had what you'd call a hot streak. Until arguably the current incarnation of the series, for the bulk of its existence the Halloween films never had a point where they, even briefly, hit their stride. With both the Friday the 13th and Nightmare on Elm Street series, they had points where they were undeniably at their peak, where they had at least a two or three film stretch where they were on a roll, commercially and creatively. You might say that having just two good movies back to back isn't much of an actual "roll" but it's more than Halloween had.

The pattern that the Halloween series followed throughout most of its existence is that a back to basics entry will connect with fans and audiences and right the ship only for the very next installment to tank the franchise all over again. There was no instance of Halloween sequels improving from one to the next or even just holding ground from one to the next. It was always a hit, followed by a train wreck.

Which brings us to Halloween: Resurrection. 1998's H20 had been well received by critics, fans, and general audiences. It scrapped off the narrative barnacles that had accumulated on the series over the years and seemed to be the big "fix" that the series sorely needed.

It also ended on a very definitive note. It looked like Laurie Strode and Michael had finally fought their last battle and that Laurie had permanently vanquished the boogeyman.

Now, I don't think any hardcore Halloween fans truly believed the series was done, no matter how things looked at the end of H20, but the question was just one of "ok, how do you go forward after that ending?" A full reboot would have probably been the smart way to go, allowing H20's ending to stand within that continuity. Or, if not that, then to have evil - or Evil! - re-manifest itself in some creative way.

But to have the finale of H20 be exposed as a cheap fake-out and just carry on from there...hmm, not great.

When H20's trailer was released, it was met with a universal cry of "Yeah, Halloween's back!" That was not how the Resurrection trailer was received. From the jump, it looked like this was gonna be rough. Although, from the vantage point of 2021, I'm really loving the cheesy early '00's vibes here.

Sometimes when a movie makes so many stunningly wrong choices, it perversely earns my respect. That's the case here. I will not try and make a convincing case that Resurrection is actually good. However, I would be lying if I said that I didn't enjoy it. How is that even possible, you ask? I don't know. This is just a fun one for me. One thing I love in horror movies is when they try too hard to be of their time and jump on then-current trends. It makes them look hilariously dated as soon as they hit theaters and that is what Resurrection is. 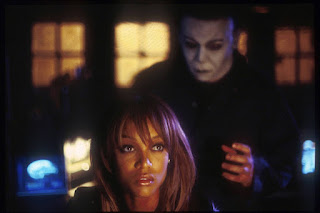 Resurrection is such a early '00's time capsule with its reality show premise and heavy use of the internet and cell phones as they were then. Everybody's rocking old-timey flip phones. And when they text, it's in full sentences, with proper punctuation! No abbreviations, no emojis! The original Halloween still manages to feel timeless while Resurrection, being so locked into its era, looks absolutely ancient. 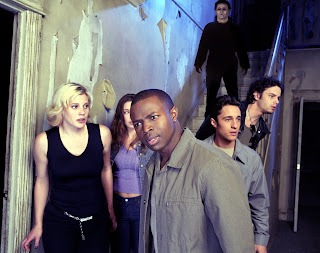 The biggest problem that most people had with Resurrection is with the head of Dangertainment himself, Freddie Harris, played by rapper Busta Rhymes. This is an area in which I will strongly disagree with the haters and say that I genuinely love Busta in this movie. He brings a completely different type of energy to the series. He may be loud and obnoxious and abrasive to some but I'm all for it. And he ends up delivering one of my favorite lines regarding Michael, describing him as a "killer shark in baggy ass overalls." And of course, the immortal "Trick or Treat, motherfucker!" is all him. Freddie rules. If only he and Loomis could have met. Inject that movie into my fucking veins!

Like Curse, Resurrection came at a low point for the genre, just before horror enjoyed a fresh resurgence. The early '00's were a time when the post-Scream horror boom had ebbed and the genre was floundering in the new decade, with filmmakers not quite knowing what audiences wanted. The genre wasn't quite down and out but it was definitely waiting for the next big wave to happen. Even the Resurrection poster looked like a relic from the fading Scream era.

The whole movie had a "last nail in the coffin" vibe, not just for Halloween but for the slasher sub-genre. It all felt played out. 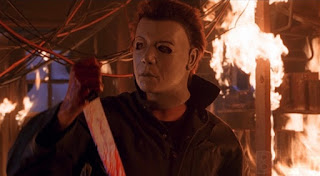 Although no one knew it at the time, Resurrection would mark the second time that a line of Halloween continuity would be brought to an ignominious close.

Personally I wish they would have continued on from the end of Resurrection. Not only would I have loved to see more of Freddie Harris (really!) but given that, for the first time, the series would have had to carry on without any of its familiar touchstones like Laurie, Loomis, or even the Myers house, it would have been cool to see what the next Halloween might have been like. But, of course, no one wanted to bother with that. Rather than the resurrection its title promised, this Halloween felt more like a funeral, or a kiss good bye. 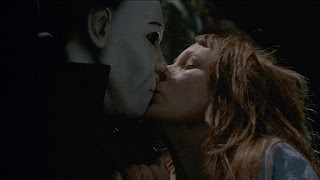 I have watched it more than I'd like to admit, but that is more the Halloween fan in me. Killing Laurie doesn't ever sit well. Nor does Freddie yelling in Michael's face only for Michael to... walk away??? Ugh.

However, I have thought (and wrote a post about) that if the Dangertainment stuff all happened first and THEN Michael found out where Laurie is would have played better. Have their confrontation on the roof, Laurie falls, and when Michael goes outside, SHE is gone. End movie Laurie would still be out there, somewhere, and it would have least ended on a throwback to the first film. But, oh well.

The Laurie stuff is definitely the weakest part of the movie for me. It undercuts the end of H20 in a way that cheapens that movie and cheapens her character. I'm not a fan of H20 in general but if you're going to go with that ending, be committed to it. So walking that back - and in such an incredibly lame way - is a terrible opening for Resurrection. And the Scooby Doo trap that Laurie concocts to get Michael, oh my God, who thought that was a good idea? And then to just kill Laurie off after she had achieved that victory at the end of H20? Terrible. But once that's done, the bulk of Resurrection is a goofy good time for me. I wouldn't ever try to defend it as good but I enjoy it for what it is. And I've always thought that Brad Loree was one of the best Michaels. He had the body language down better than just about any one since Nick Castle and the mask was on point too.