When the ghost story The Hearse opened in 1980, compared to the R-rated splatter films it was competing against, this PG effort was dangerously old-fashioned. But in considering the film today, what jumps out at me as being old-fashioned is the age of heroine Trish Van Devere. Technically she's a young woman - probably a little shy of forty at the time - but being thrity-seven or whatever back then was like being fifty today. You'd never see an actress like this as the lead of a horror movie now.

I mean, look at this poster for next month's The Haunting of Molly Hartley: 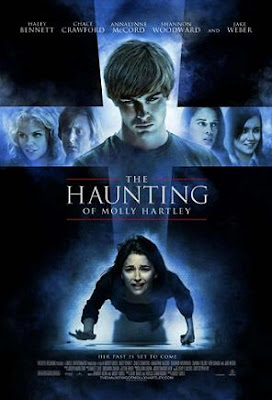 In comparison to these kids, Van Devere looks like someone who's ready to be riding in the back of a hearse. I guess the trend towards youth has been a wise commercial decision but seeing real adults in horror movies was always appealing to me as a kid. I never felt like I couldn't relate to characters if they weren't young enough. Male actors will always get a break in this regard because there's always roles for middle-aged and older men in horror movies (Donald Pleasence would still be cast in Halloween today, for instance, and look at Tobin Bell in the Saw films) but with women it's a different story and that's a real loss.

At one time, with movies like The Hearse, The Nesting, The Entity and The Hunger, it was commonplace to see a mature woman cast as the lead in a horror film. Now it's almost unheard of (especially if the character isn't a mother, as with Naomi Watts in 2002's The Ring or Julianne Moore in 2004's The Forgotten) and to me that's sad.

The fears of a woman in her thirties or forties are different than those of a girl in her teens or a woman in her early twenties. It's something you can see in their eyes. A young girl doesn't have a past to escape or regrets to outlive (as Van Devere says, "when my marriage ended, I nearly cracked up"). Their loves are still young loves. They can be haunted by ghosts, but they're not really haunted.

It's only in time that they bring their own ghosts with them.

I was just reading that in the remake for HOUSE ON SORORITY ROW that rather than the girls offing their evil housemother they instead accidently kill one of the sisters. The first thing I thought was, of course, God forbid there be an older person in a horror movie! What is up with that? You can't even have one as the "bad" guy?

I'd also like throw a shout out to Carrie Snodgress in THE ATTIC! (Because the Snodster rules my world.)

Great pick with The Attic - Carrie Snodgress was terrific in that! She was also in one of my favorite episodes of Friday the 13th: The Series where she played a woman from Jack Marshak's past who comes back into his life but their reunion comes to a tragic end.