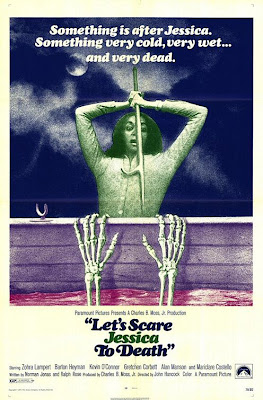 No other horror film has given us a heroine as memorably fragile as the title character of director John Hancock's unusually sensitive shocker Let's Scare Jessica To Death (1971) and sadly, it's unlikely that we'll ever see her kind again. Not only do we live in the post-Ripley world of female heroes but in the post-Sarah Connor and post-Buffy age as well. As a rule, girls have to kick ass.
But with Jessica, Hancock and co-writer Lee Kalcheim gave us a heartbreaking protagonist (brilliantly played by Zorpha Lambert) who makes the insecure Eleanor of Robert Wise's The Haunting (1963) look like Lara Croft.

This is a favorite of mine, as well. Truly one of a kind.

I agree, Bob - for me, there's no other film quite like it.

I remember the tv ad for this one scaring the 7 year old me "to death." The movie somehow made the list of "Worst Horror Films of 1971" in the Monster Times, but after seeing it, I disagreed and thought it aged pretty well. The early scene of the tombstone rubbing was creepy, and the film just went from there. I think many of the current crop of horror film directors could take a lesson from this film, and see how what is implied, together with good acting and a script that is emotionally truthful and mature, can add up to some real scares.

I came across that issue of Monster Times a few years back. I think it had some kind of snarky comment like "Let's Bore Jessica To Death" or something. Makes you wonder what films from today will be considered classics in thirty years or so!

Good write-up!
'Jessica' has been one of my all time favorite horror films since I first saw it long long ago...
To this day I put the blame on it for my fear of deep water... I keep expecting to look down and see a figure in a white dress drifting up towards me.
The sense of loss and regret and loneliness... so strongly presented in 'Jessica' are common to most all of my favorite horror films.

The first time seeing this film scared the hell out of this seven year old in 1972.In 1981,I seen it again on the tube's late show and gathered my friends to watch it with me.In 1998,I discovered it was out of print and could be purchased for fifty dollars on VHS,so I was thrilled to pay the price just to get it!One of these days I will go to Seybrook,Conn.to find this films location and walk the grounds to see what has changed and what has remained the same.I love this film on sleepless nights.

I was seven years old when I seen this film in 1972.In 1981,I caught it with friends on the late show.In1997,I discovered it was out of print,but,available for fifty dollars so I was glad to pay the price.One of these days I will go to Seybrook Conn.and walk the grounds of where this film was made just to see the house and what has changed from nearly forty years ago.I love this film on sleepless nights.It's an evergreen.

I paid fifty dollars for this film because it reminds me of my youth and I love to watch it over and over on sleepless nights.One of these days I will travel to Seybrook to see what has changed in forty years and what remains the same.

I found the house on Google Earth
The film,Lets scare Jessica to death. Google earth sat me down on
the street facing the old Bishope
place.See it @298 Middlesex Turnpike,Old Saybrook,Connecticutt
06475 I also found out that Katherine Hepburn lived in Old
Saybrook.