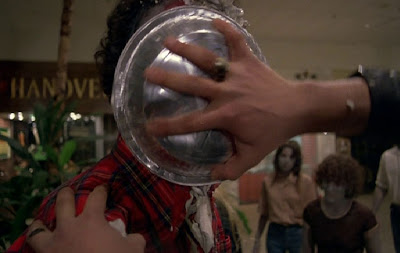 Help yourself to some pie, people - today marks the one-year anniversary of this blogspot! I'm not one for blowing my own horn - or even for owning a horn to blow - and this blog will be no exception but I do feel like the occasion should be marked by a few words.

Mostly that would be simply "thanks". Thanks to folks like Steven Wintle of The Horror Blog, Steve Biodrowski of Cinefantastique Online, and mystery man 'Arbogast' of Argobast on Film. Without coming across The Horror Blog and becoming aware of the blogosphere at large, I never would've been inspired to start Dinner with Max Jenke in the first place. And to unexpectedly be included after just a few months on the web and with less than forty posts to my credit as part of the Blogroll at Cinefantastique and Arbogast's 'For Your Information' links section was in both instances a great - and greatly appreciated - source of encouragement. I didn't take those links for granted and knowing that I was lucky to be exposed to the readership of both those sites spurred me on to be as active as possible in posting here.
I also have to give a special shout-out to my pals Unkle Lancifer and Aunt John of the indispensable Kindertrauma. Besides sharing damn near the exact same taste in horror as I do, thanks to their support I was invited to be a part of The League of Tana Tea Drinkers and to be included among that company has been a major incentive to keep writing.
Often times when I look at what other bloggers are up to, I feel like I'm doing the dog paddle in a pool full of Michael Phelps'. But even though I feel like some of my posts should've never made it online (I won't say which ones!), after just a year to have received the kind of support I have makes me think I'm getting more right than wrong here. I've never checked my hit count so I have no idea what kind of traffic this site receives (I'm superstitious about knowing things like that) but I hope that anyone who's come to Dinner over the past year hasn't left hungry. Or worse, with indigestion!

And before I completely forget my (table) manners, a final thanks to my friend Marty Langford for generously creating the banner seen at the top of this blogspot.

As soon as I added that element to the page, I felt that Dinner with Max Jenke was something real. So here's to Year Two - I predict a lot of junk food on the menu still but I've got to stick to what I've got in the kitchen!
Posted by Jeff Allard at 1:27 PM

Happy Birthday Jeff! I don't have to tell you that DWMJ is one of my favorite blogs ever. When you're not coming up with something that is right on the tip of my tongue you're blowing me away with something that I had never even thought of before. I know that I learned more stuff here than anywhere else this year. I'm lifting a beer up to Jenke right now, congratulations on a great year!- UNK

Thanks for the well-wishes, Unk! And a big congrats to you and Aunt John for Kindertrauma's appearance in the new Geek Monthly! That's frigging awesome - I can't wait to score an issue!

Congrats on a great year's worth of blogging. You've made me think about a number of films in ways I otherwise wouldn't have, and for me that's the best thing any writing about the movies can achieve.

Thanks for the support, Bob - it's much appreciated!

I'm so proud of you, Jeff. As your wife, I know first hand how hard you work on DWMJ and it shows. You've built up an audience in this past year because your blog is entertaining, smart and touching. You're a true movie fan and your passion / sincerity for whatever you write about shines thru.