If You're Coming To Texas, You'd Better Bring Some Heat 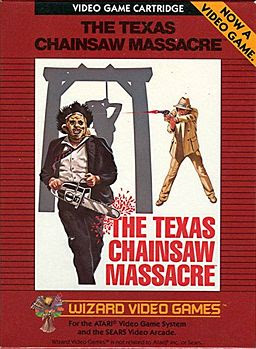 While going through my back issues of FANGORIA, I came across this long-forgotten advertisement for the Texas Chainsaw Massacre video game. At the time I originally saw this ad, I hadn't seen the movie itself and I assumed that the lean fellow to the right taking deadly aim at Leatherface must be a character taken directly from the film, which prompted me to imagine this person's role in Texas Chainsaw.

Despite the gun, I didn't get a cop vibe from him; there was something above the law about this character. He looked like someone who'd be at home in a pulp novel. Maybe he was a private detective hired to investigate a disappearance that Leatherface was responsible for. Or maybe he was a self-appointed vigilante - someone whose wife or daughter had been slain by Leatherface and was out to score some Texas-style payback. All I knew was that I was excited to discover what I thought was one more piece to the puzzle when it came to unravelling TCM.

I don't know if I was still thinking of this imaginary character when I did finally see TCM but looking at this ad reminds me of a time before the ready availability of films on VHS and cable when even the classics had plenty of mystery to them. Unless you were old enough to have seen a film during its original release you'd know about a movie like Texas Chainsaw or The Exorcist by their reputation but have little else to go on. You couldn't instantly go online and find out every detail of a movie (or download it, for that matter). And it wasn't even like hearing about a film and speculating about it for a few weeks or months before seeing it for yourself - it was often a matter of waiting many years (the subject of a recent blog over at Arbogast on Film). And the longer a movie stayed out of reach, the more every new piece of info was able to take on a life of its own.

This unknown shooter was someone I wanted to know more about. I didn't know what had brought this mystery man up against Leatherface but he looked dangerous in his own right. This wasn't some barefoot hippie knocking on the wrong door looking for gas, this was a seasoned operator who showed up to kick some ass.
And I still can't help thinking there's a story left to be told about him.
Posted by Jeff Allard at 9:39 AM

I'm like you...I saw this ad before seeing the movie. So I too wondered why this mystery shooter was not in the film. Did he even show up in the video game? I remember seeing stills from the game in magazines -- it looked horrible, even by Atari 2600 standards -- but I don't remember the shooter being there either.

I never played the video game so I can't say much about it, although I do remember seeing screen shots that made the game look incredibly shoddy. I'm sure the ad was way cooler than anything the game had to offer.

Hmmm...
I hadn't seen this game ad before... but my first impression had me thinking that the 'mystery man' was a new member of the family... maybe taking aim at Marilyn Burns as she runs from the house at the end.

But now that I read your article I can see him more as a Charles Bronson 'Deathwish' type character... which now has me wanting to see some 70's era horror where a street vigilante goes up against a clan of cannibals.

I instantly had the Bronson vibe off of him - but the idea that he could've been another member of the Family is a cool thought that had never occured to me!