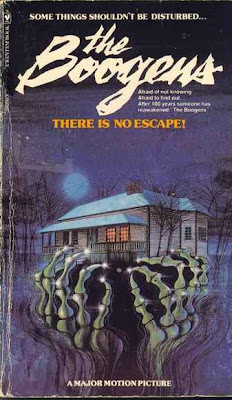 I don't know what I find more surprising about the above pic - the fact that the 1981 low-budget favorite The Boogens, which told the tale of tentacled creatures unleashed from the depths of a long-closed Colorado mine, was the subject of a paperback novelization or that the film was ever touted as being "a major motion picture."

To read that claim on behalf of a movie as impoverished as The Boogens reminds me that the early '80s was the last time that low-end exploitation pictures had a chance to compete on semi-equal footing with blockbusters and mainstream fare. Is it any wonder the world was a better place back then?
Even if someone came across The Boogens on cable rather than in theaters, they could at least remember that it had a theatrical release right alongside the big movies of the time (The Boogens opened on the same weekend in September '81 as Oscar winner Chariots of Fire, in fact). Home video was in its earliest stages and that meant B-movies were still sharing space at the multi-plexes and drive-ins with big budget offerings. For instance, in 1982 Basket Case could be playing the same venues as E.T.. And some of the most successful films of that era, like the Friday the 13th films, were independent productions distributed by a major studio. The line between A and B pictures didn't seem so wide. All you needed to compete was a kick-ass poster.
As a kid it would never have occurred to me to avoid a movie because it looked too low rent. I would go see Timerider: The Adventure of Lyle Swann just as eagerly as I'd see Tron. But presentation is more of a factor among movie-goers today. If a smartly made movie looks cheap, it's going to be judged as corny. And on the opposite end, if the most deadening effort has the kind of production values associated with "good movies", it'll get a shot.
I just think it's dispiriting that real B-movies have long fallen out of favor and that a scrappy item like The Boogens would get the bum's rush today. I grew up thinking it was movies like The Boogens that made it all worthwhile; that these unassuming little films with nothing going for them but a few slimy tentacles and a lot of heart were what made being a genre fan fun. These films were the lifeblood of the genre, not the big ticket stuff like Ghost Story or whatever other hollow, studio-funded bomb was being shoved down our throats. Somehow, over the years, that's gotten flipped around.

Having said all this, let me say that I'd like someone to take on the all-important task of remaking The Boogens. As a fan, I want to see the Boogens rise again and it's too many years later for a Boogens 2 - the only way to go now is with a remake. If B-movies have to be jacked-up to 'A' proportions to survive, then The Boogens deserves its turn, too. To whoever can make this happen, come on...bring the Boogens back! What's good for The Boogens will be good for all of us.

I hear it's the stuff that major motion pictures are made of.
Posted by Jeff Allard at 7:30 PM

Email ThisBlogThis!Share to TwitterShare to FacebookShare to Pinterest
Labels: The Boogens

Don't ever recall coming across this one - but one of the others you mention - Basket Case(and its many strange sequels) has many fond memories for me. I would love to see some of those on the big screen again!

Yeah, The Boogens is kind of a hard film to come across these days. I don't think it's ever gotten a DVD release. As for the Basket Case movies, I love 'em all! I'd have to say I actually enjoy the sequels a little more than the original.

The Boogens would still have a life today, albeit as a Sci-Fi Channel release with a later, more violent DVD edition. It's cold comfort, but there you have it.

All things considered, I could happily live with a Sci-Fi Channel version of The Boogens! I'd take that option any day over a totally Boogen-free world.

Holy crapsticks, Timerider! Isn't that the one with the time-traveling motorcycle? Watched that ad nauseum on HBO as a young tween.

I finally saw The Boogens via an eBay purchase coupla years ago. A bit slow, and the eventual creature reveal was a bit of a letdown. Still, it's exactly the kind of movie I'd have gobbled up when first discovering horror in the early '80s.

Yep, that's the same Timerider with Fred Ward as Lyle Swann. I saw it in the theaters and loved it but haven't watched it since.

God, I adore this movie. Rebecca Balding, slimy creatures and the blonde guy in Ladykillers who always "All you sexy, sexy ladies!"

I pretty much agree here with you about b movies and the state of our cinema currently. I remember my brother got to see CHUD and Bolero in the theater. Now that's just rad!

I couldn't agree more, Jeff. There are probably dozens of great no-budget gems hidden away out there, but few of us ever give them a chance for fear of coming home with another Bloody Murder or Fear of Clowns.

Amanda, Rebecca Balding is one of the main reasons that I love The Boogens! One of these days I hope I'll finally find my misplaced VHS copy of 1980's Silent Scream that featured Balding as a transfer student who picks the wrong off-campus housing and encounters a murderous presence in the attic of her new digs.

And John, thanks for the comment! I used to keep up on nearly every direct-to-video title years ago when I worked at a video store and saw them all for free but since then I rent only a handful of films a year.

The Boogens is a wonderful, underrated creature feature - agreed! I have a beat-up copy of the film's novelization that I count as one of my most treasured collectibles. It's always a bit sad for me watching the late Fred McCarren in the lead. His death in 2006 from colon cancer while only in his 50's was really tragic.

For me, though, the film was all about Anne-Marie Martin (aka Edie Benton). She was one of my favorite scream queens from the era, with roles in Prom Night, The Boogens, the lions-run-amok opus Savage Harvest, and her cameo in Halloween II. Toward the end of her acting career, she turned to comedy in Sledgehammer and was brilliant. I've heard she's got an agent again and is looking to get back into acting. (Although she's divorced from writer Michael Crichton and I hear she doesn't need the cash.)

I hadn't known about Fred McCarren's untimely death - that's sad to hear. As for Anne-Marie Martin, I always liked her in her few films appearances. I read that she had married and divorced Crichton so I figured she just didn't have to worry about working after that. It'd be great to see her come back, though.

And it's been years since I watched Silent Scream but I remember really enjoying it. If I can't find my tape I guess I'll have to spring for a bootleg at the next convention I go to!

I can't believe Fred McCarren died. That is really upsetting news. More upsetting that he passed in 2006 and I'm just now hearing about it. I feel like everyone should get their respects and notice when they die. He was a wonderful actor and made the Boogens such a treat because the cast was just so damn likeable.