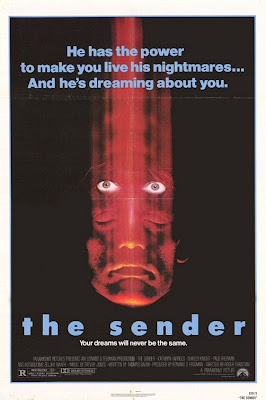 At one time, it was much easier to unexpectedly come across a surprise like 1982’s psychic thriller The Sender. Today, thanks to the constant flow of info coming across the internet and with even mainstream outlets like Entertainment Weekly being savvy about genre fare, it’s rare that even smaller horror pics aren’t discussed to death months ahead of their releases. It’s almost impossible to feel like you’ve discovered a movie entirely on your own anymore and some of the fun of following genre films has disappeared with that. But a movie like The Sender was one of those minor gems that quietly amassed a following with most fans finding it on its frequent airings on HBO in the early ‘80s.

When I first watched The Sender, it immediately struck me as being different from other horror films at the time. I was about thirteen and I think that was probably an ideal age for me to appreciate it. My tastes were maturing just enough where I responded to the fact that this represented a more challenging, ‘adult’ horror film rather than just a slasher movie. I’m sure I felt a little smarter for liking a film that most of my friends probably would’ve found to be boring. It was a case of meeting the right film at the right time.

Directed by Roger Christian - the Oscar-winning set decorator for Star Wars - who, as a director sadly went on to helm Battlefield Earth (2000), The Sender struck a soft tone that was rare in an ‘80s horror scene that saw genre films getting more coarse and abrasive along with audience’s sensibilities. Abetted by Trevor Jones’ lush score (that bucked the then-popular trend of synthesized scores for horror films), Christian made a film that succeeds as an eerie mood piece first and foremost. As for the storyline, Thomas Baum’s screenplay (first conceived by Baum as a possible novel) centers on a suicidal John Doe patient at a mental hospital who has the uncanny – and uncontrollable – ability to make his dreams appear to the waking world.

Despite the character’s psychic abilities, the role is empathetic rather than fearsome, as reflected by actor Zeljko Ivanek’s sensitive performance. And even before John’s strange gift reveals itself, his plight as a troubled amnesiac earns the sympathetic attention of Dr. Gail Farmer (Kathryn Harrold) who tries to block her superior’s attempts to treat John with electro-shock therapy. Gail’s boss, Dr. Joseph Denman, is played by Paul Freeman – best known as Indiana Jones’ rival archaeologist Rene Belloq in Raiders of the Lost Ark – and Freeman gives his character a surprisingly positive portrayal. Typically in a movie like this, Denman’s character would have to come across as the heavy, some self-important, bureaucratic fool. He’d be the asshole that Gail has to butt heads with to save her patient – he’d be Priscilla Pointer’s character of Dr. Elizabeth Simms in A Nightmare on Elm Street 3: The Dream Warriors. But instead, Denman is shown to be genuinely concerned for the welfare of not just John Doe but the rest of the hospital’s patients and staff. If he makes a bad call, it’s not out of ego or malice. And that refusal to vilify a character that normally would be painted with a broad brush is indicative of The Sender’s unusual approach. This is a horror film with no monsters or villains.

John Doe #83 may have an affliction that makes him dangerous to others but he’s never shown to be a sinister character. We don’t have to impatiently roll our eyes as Gail endeavors to save him with minimal harm. And when John’s religious fanatic mother Jerolyn (Shirley Knight) is introduced, this is another character that could’ve easily fallen into the stereotypical role of a screeching, evil Bible-thumper. This could’ve been Piper Laurie in Carrie or Marcia Gay Harden in The Mist. Instead, while we see that Jerolyn is emotionally disturbed and a clear threat to her son’s psychological well-being, she isn’t a character that we hate. As played by Knight, we can understand that in her mind, Jerolyn is the only person who can properly care for her son. A horror movie that has an opportunity to turn a mother into a monster and doesn’t go for it is rare but at every turn, The Sender refuses to play by the normal rules. That may have come at a cost to its effectiveness as a crowd-pleaser but it allowed The Sender to leave a unique impression. The cast is uniformly excellent, with its main players – Harrold, Freeman, Ivanek, and Knight – all continuing to enjoy busy careers to this day. At a time where the horror genre was predominantly teen-orientated, and where performances took a backseat to splatter FX, its talented cast made The Sender seem like a horror movie aimed at an altogether different crowd.

But yet The Sender did have its share of shocks to offer. Two years before A Nightmare on Elm Street (1984) would be celebrated for the exciting way it kept the audience off-guard by blurring the line between dreams and reality, The Sender was mining similar territory. Without warning, swarms of bugs and rats appear. Mirrors crack and drip blood. Christian aims for believability in each instance, with the film's varied effects being accomplished on set and in-camera by FX supervisor Nick Allder and special effect technician Alan Poole. And working under Allder's guidance, makeup artist Sarah Monzani did the casting and sculpting work utilized in two of The Sender’s highlights – a decapitation scene and a scene in which a rat crawls out of a character’s open mouth (a moment so good that Christian can’t help replaying the shot on a video monitor later in the film, even though it makes little sense for it to reappear).

Reports have persisted over the years that The Sender was heavily edited before its release and that material that would’ve helped the storyline make more sense was removed. I’ve never read any details about exactly what happened or what material was lost but it is clear that some questionable edits were performed.

For instance, at one point John is talking to a fellow patient - a disturbed Vietnam vet (Al Matthews). When the vet has an angry reaction to John’s insistence that the war is over, the film cuts to a shot of John running down the hospital halls, apparently fleeing the vet. But when John runs back into the room he shares with several other patients, the vet is already there, lying comfortably on a bed in the background. So clearly, Christian was taken out of the loop in the post-production process.

Unfortunately, despite its cult reputation, The Sender never garnered the kind of rabid fanbase or critical acclaim that would motivate the kind of rediscovery and re-edits that a film like, say, Blade Runner has experienced so a Director’s Cut of this worthwhile film will have to exist only in its fan’s dreams.
Posted by Jeff Allard at 5:56 AM

Email ThisBlogThis!Share to TwitterShare to FacebookShare to Pinterest
Labels: Roger Christian, The Sender

I loooove this move and this is probably the best piece I have ever read on it. The Sender is in a class all by itself. It's like Bergman directing Elm street. You're right to point out there are some strange cuts in the film but you may have ruined my life by presenting the idea of a director's cut, I'll be fantasizing about that all day. It kills me that a movie like this has such trouble finding an audience. People claim to want quality horror but when it's delivered to them they seem to run in the other direction. I'm really looking forward to the impending DVD release of this, as much as i adore the tropes that this film willfully ignores, it's a real breath of fresh air to see characterization and tone the main focus of a horror film. (rats and decapitations don't hurt either!) -UNK

Okay, that does it--I've been aware of this flick since I saw a still of the decapation in (I think) Fangoria, but never rented it. But if Max Jenke AND Kindertrauma recommend it, The Sender's going to the top of the Netflix queue.

Hey guys, thanks for the kind words! Ivan, I hope you won't be let down when you finally check this out. And Unk, I'll ruin your life just a little bit more by mentioning that I read an interview with Quentin Tarantino many years ago where he claimed to have assembled his own 'director's cut' of The Sender. I wish I knew where that interview was published but it was back in the mid-'90s and Tarantino said that he had alternate cuts of The Sender that he had re-edited into a more complete version of the film. I've never heard anything mentioned about it since but who knows, maybe some interviewer will quiz him about it again one day!

I was lucky enough to see this in the theater when it first came out.
As I remember we went in pretty much completely ignorant of what the movie was about (something a LOT easier and cheaper to do back then).
We were all blown away by how good it was... I think we'd picked it solely based on poster in the lobby.

For some reason my brain wants to make a double-feature out of this and 'The Carrier'... another overlooked film IMHO.

i am really honored to have your review on this movie. i was really proud of it, and as a first movie i directed it was such a struggle battling the producer and the studios. it was never released in europe despite garnering amazing reviews in America and Canada and being honored to be chosen to open the Avoriaz festival of Fantasy and Horror films. At that time the most prestigous festival for these genres. We won several nominations too in the Academy of Science Fiction , Fantasy and Horror films. At Avoriaz Mad Max's George Miller, Alan Pacula and many famous directors absolutely loved the movie, but it caused me so much stress afterwards and a battle to get another project made. John Travolta introduced me to Quentin Tarantino as he had recommended me for Battlefield Earth and absolutely loved the Sender. He did indeed re edit the movie. He had seen it many times in the cinema as he realized the studios weren't behind it. Then saw it on television and recorded it. While working at the video store when it came out for rental he realised the studios had cut it. so on his own cost he re edited the video rental version back to the original film v\cut. he has that copy still. there were a few scenes edited in post. We were fighting the studios who absolutely had no faith in it and the editor and I struggled to keep it's integrity. I have been somewhat vindicated now as the film seems to have become a cult classic I am told. Certainly in Japan etc and Europe. Maybe I'll remake it one day.
thanks Roger Christian

The honor's all mine, Mr. Christian! I'm always happy to gush about my love of The Sender. It's a shame that The Sender wasn't immediately hailed as a superior genre film but time has definitely vindicated it. Thanks so much for taking the time to share your memories of the movie!