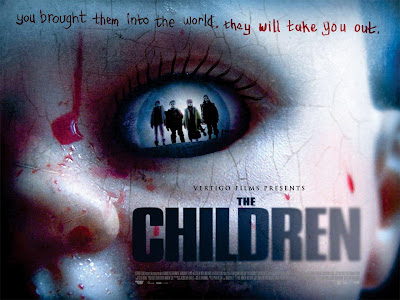 Stories about evil kids never go out of style, they never lose their currency, and these sort of tales are even more alarming to me since the birth of my son three and a half years ago. I now know first hand that children can be amoral little creatures and despite their size, they're more capable of inflicting harm than you might think. But while we wait to see how well the upcoming UK chiller The Children (visit the film's official site here) exploits its creepy subject matter, I'd like to give a shout out to an earlier film by the same title that remains one of my favorites - 1980's The Chidlren. 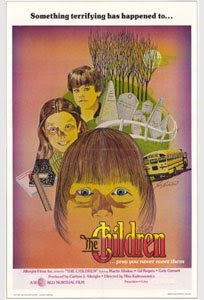 This film is an embarrassment on every level and yet I remain stubbornly fond of it. Telling the tale of a school bus that drives through a toxic fog, turning all the children on board into nuclear-powered zombies with black fingernails and the ability to microwave any adult just by hugging them, The Children was and is a whole new kind of stupid. A staple of the USA Network for years during the mid-'80s, The Children frequently aired on USA's Saturday Nightmares as well as on Commander USA's Groovy Movies.


I never passed up an opportunity to watch this - mostly due to the method used to dispatch the children. Somewhere along the way, it's determined that only by chopping off the hands of the children can they be put down - not cured, but killed. By the climax of The Children, the lawn of the Last Parent Standing is littered with tiny hands. What I love about The Children is that no effort to subdue the children by non-lethal methods is considered. There's no thought to contain them so a cure might later be found.

And that the only way to kill the kids is to chop off their hands is only half as funny as the fact that this award-winning solution is only discovered after it's found that bullets have no effect on them! So only after failing to gun the children down does dismemberment look like a good idea. Luring these kids into a barn, or a basement and keeping them locked up even for a few hours is never discussed. In the world of The Children, parents have no qualms about throwing their kids under the (school) bus.

Maybe they knew what Helen and Harry Cooper had to learn the hard way in Night of the Living Dead - that when it comes to your kids turning zombie, it ain't no bedtime story. You've got to shoot 'em, burn 'em, or cut 'em into little pieces. If you don't, it's your ass.

Email ThisBlogThis!Share to TwitterShare to FacebookShare to Pinterest
Labels: The Children 1980, The Children 2009

True, this movie goes beyond the strata of guilty pleasure to something else entirely... you feel obligated to watch the goddamn thing. I haven't seen a frame of it in over 20 years but there are loooong passages burned into my brain.

Yeah, there was never a time when I'd just watch a few minutes of The Children and be able to say "eh, I've already seen it" and move on to more important things. Once I started, I'd always have to stick it out.

You forgot to mention the horrid end with baby with black fingernails. And I never understood how they could be okay sometimes and then the toxic thing would kick into effect and their fingernails turn black and they would attack.

That ending kills - and like the rest of the movie, it makes absolutely no sense! But like you say, there's something about evil kids that makes even a ridiculous movie just a little creepy.

And of course haunting the film is the specter of all the actors' earlier careers - Martin Shakar from Saturday Night Fever (there was a kind of Jason Miller gravitas to this guy), Gil Rogers from the Broadway production of Best Little Whorehouse in Texas (he replaced Henderson Forsythe, the doctor from Deathdream), and Gale Garnet, who won a Grammy for the pop single "We'll Sing in the Sunshine" (it was a cloudy day when she was cast in this movie!) and provided a voice for Mad Monster Party with Boris Karloff.

Love The Children, thanks for the USA video,I miss those days. Great blog name btw. later.