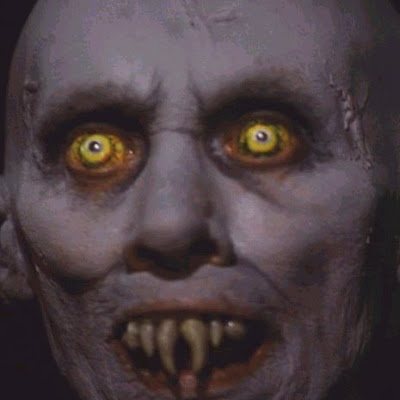 Tobe Hooper's adaptation of Stephen King's Salem's Lot originally aired in late November of '79 but for me, as soon as October arrives and the leaves start to crunch beneath my feet, I feel the itch to revisit this favorite. It isn't as easy as it used to be for me to clear the time to watch this in one sitting but I feel like it wouldn't be fall if I didn't. There might be a lot of mundane soap opera elements to be found in this mini-series but even if there had just been five minutes of Barlow in the entire four hours that Hooper took to tell this tale, it still would've been a high-ranking horror classic for me.

As anyone who's read the novel knows, in describing Barlow in the book, King never wrote anything along the lines of "looking at this dude made people want to eat their own faces off in fear". But to his credit, Hooper had other ideas. While there's an obvious debt to Max Schreck's appearance in Nosferatu, Nosferatu always struck me as a sad, frail figure. He may have been an immortal vampire but he seemed like someone you could goof on to their face and get away with it - if you were the type of person who would do that sort of thing, that is.

That's not the case with our friend Barlow, however. Studies prove it's hard to goof on someone after you've swallowed your own tongue.

Good God, the end of that clip scared the hell out of me. I've got to revisit Salem's Lot '79 this Halloween...the image of a vampiric Geoffrey Lewis in his rocking chair is still burned in my brain.

Yeah, that clip never fails to make me jump! And that scene with Geoffrey Lewis is terrific, too.