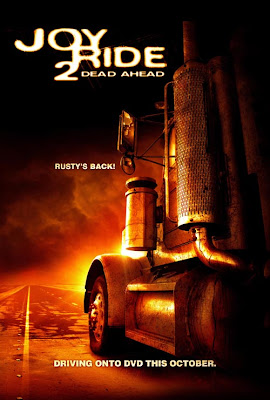 John Dahl's 2001 original Joy Ride was a modest hit that fared well across the board with audiences, critics, and genre fans. So how does the DTV sequel (rolling into stores today) measure up? My full review is up over at Shock Till You Drop but the short version is that it's pretty lousy. That's probably not breaking news to anyone but I have to say, watching this movie made me wonder why so many horror filmmakers in recent years believe that making characters who come across as intensely unlikeable is a productive strategy.
It used to be that you could count on most protagonists in horror films to be appealing - even those side characters who you knew wouldn't make it to the end. It just seemed to be the way to go - if a filmmaker wanted their audience to fear for their characters they should be sure to make them relatable and sympathetic. Even when the occasional jerk was included, they were never that abrasive.

But there's a character in Joy Ride 2 that's a belligerent ass well past the point where most human beings would've started to show a different side to themselves. If a filmmaker wants to introduce a character by having them come off as arrogant or sarcastic only to reveal those qualities as being a front, that's fine - but don't wait until the 11th hour to turn that card over. By then, your audience will have long stopped caring.
Maybe these types of characters are just a sign of our culture. Selfish, attention-seeking behavior is popular today in a way it wasn't years before (after all, you don't see many reality shows about considerate, well-adjusted people) so maybe that's why we see it appearing more in films. But to me, it's nothing but detrimental to making scary movies. When I watch a horror movie, I want to feel worried that its characters won't find a way to survive - not be angry if they do.
Posted by Jeff Allard at 5:11 AM

I have this idea (fantasy, delusion) that those unlikable characters exist because some part of the filmmaker feels bad about the idea of killing someone they like. I'm a glass half full kind of guy.

At first I was gonna say, 'heck no, all those victims in the old slasher movies were annoying!'... but then I started remembering certain 'cannon fodder' characters I liked.

Maybe it's just a sign of the times... we are meaner... we root to see these losers die... we don't go to be scared, we go to see the destruction.

There's definitely been some great unlikeable characters in horror film history - like Franklin from Texas Chainsaw, for instance. But it just seems like too many modern filmmakers are of a mind-set that the only way to make a character stand out is to make them obnoxious.