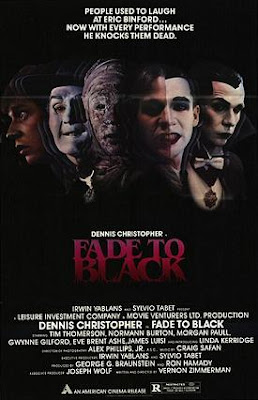 Last week's episode of Supernatural, featuring a shape-shifter who copes with the loneliness of being a freak by adopting the guise of classic Universal monsters, inspired me to dig out my copy of 1980's slasher thriller Fade to Black, in which a movie buff uses his expertise in make-ups and disguises to become the characters he loves when he proves unable to cope with his everyday troubles.

Played by Dennis Christopher, Eric Binford was the quintessential movie nerd of the pre-internet, pre-DVD, pre-VCR era, a friendless nebbish spending his nights projecting old films on the walls of his bedroom.

In time, pressure from his disabled but loud-mouthed aunt, his abrasive boss, his bullying co-workers (including a young Mickey Rourke) and a romantic misunderstanding (with his dream girl, a Marilyn Monroe look-alike) push wimpy Eric over the edge and he starts to slay his enemies in the guise of movie icons like the Mummy and Hopalong Cassidy. But as I actually started to watch Fade to Black again for the first time in many years, I realized to my surprise that I found that Eric Binford wasn't the sympathetic soul that I remembered. Christopher gives a good performance but man, what an unlikeable character! 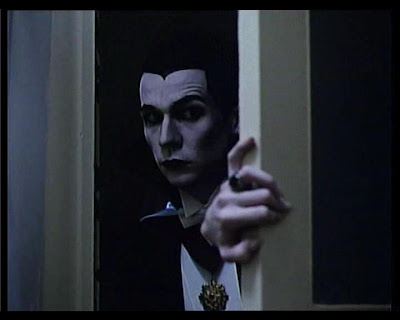 I didn't even get through half the movie before shutting it off and moving onto something worthwhile, like Leviathan. This reaction made me realize that what used to be considered sympathetic traits in characters are now qualities that we have much less patience for. During the '60s and '70s, it used to be common to see nervous, neurotic types portrayed as put-upon protagonists. But today you can only be so much of an introvert without turning off an audience.

To present a character like Eric Binford with no aptitude for social skills would be a hard sell now. Today giving attitude is second nature, being a geek is hip, and to be exposed to pop culture in the last twenty years is to be extra-fluent in irony so there's less tolerance for modern characters - even ones that are meant to be 'different' - to be sketchy weirdos. If you can't find a way to make your individuality work for you, then you must be doing something wrong.

If you're a true social misfit it's no good being sensitive and insecure about it. That's weak. You have to declare your outsider status by being a hardcore serial killer. The Eric Binfords of the world are too soft and easily pushed around to look at with anything but exasperation. Hell, you wouldn't even want to talk movies with them.

Your writeup brings to mind 'Bad Ronald'...
I knew as I was watching it that Ronald wasn't meant to be a sympathetic... but I did sympathize with him.
I felt the same with 'Fade To Black'... and blamed the 'bias' of the film on the people who made the movie... for not recognizing that these 'villains' were a lot more interesting and smart than the people they were doing in.
Adolescent revenge fantasies for a geeked out junior high kid...
It's been a while but I'm not sure I wouldn't still side with these monster-geeks against their blandly annoying victims.
Luckily strange new films like 'Napoleon Dynamite' have come along that raise that level of social awkwardness to new heights of cool... without a body count.

Nice write up! I keep meaning to come back more, but I'm offline at home right now, so I have to squeeze all my blog readings (and my own writing) into lunches and stuff.

Thanks for the great comments, you two! I kind of feel like I only scratched the bare surface of something that might've made for a more in-depth blog but maybe I'll back around to the subject another time. But I do feel like there's a difference between yesterday's misunderstood misfits and today's - that our ability to empathize with outcasts has been diminished or altered along the way.

Just look at the difference between Carrie White and the updated version of a high school wallflower that Emily Bergl played in 1999's The Rage: Carrie 2. Bergl's character is light-years removed from Sissy Spacek's portrayal of a weird, mousey girl.

For a high school outsider, Bergl's telekinetic teen was more of an anticipation of cool alternative figures like Thora Birch's Enid in Ghost World or Ellen Page's Juno than she was the study in painful adolescence that Spacek's Carrie was.

That kind of real anguish is hard to look at and maybe we don't want to see characters that are so openly vulnerable today because it's not what our increasingly ironic culture is equipped to deal with. I don't know. But this response is turning into its own blog so maybe I will come back to this subject another day!

I love this. I have not seen fade to black in a few years. But I feel the same way about the character Douglas in The Fan.
And what about this; The Fan, Dressed to Kill, All of the Hannibal books and movies have some pretty obvious queer overtones.
I always figured the character in Fade to Black was a gay too... Socially awkward, putting on different disguises, submissive and being a ward of an older female relative...
Any thoughts?