The Ray Bradbury Theater: "The Town Where No One Got Off" 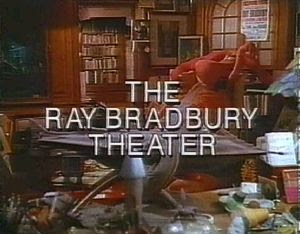 One of my favorite episodes of the slight but entertaining '80s anthology program The Ray Bradbury Theater was titled "The Town Where No One Got Off" (based on a short story that first appeared in Ellery Queen Magazine in October 1958). Originally aired in 1986, "The Town Where No One Got Off" told the tale of Cogswell, a dream-filled, would-be writer (Jeff Goldblum) traveling alone by train who rises to the challenge of a cynical fellow passenger (Cec Linder) by deciding to forgo his plans and depart the train at a random small town.

Having argued with this passenger that the simple life offered by these anonymous small towns is preferable to the high-stress environment of the big cities, Cogswell sets out to explore an unknown town just for the sake of discovery. In typical small town fashion, though, Cogswell's presence is received by a lot of suspicious glares. But as he walks through the town, being rejected at every turn whenever he tries to make contact with these 'friendly' small town folk, Cogswell becomes aware that someone is following him. An old man (Ed McNamara) who had been seated at the station platform when Cogswell exited the train has been trailing him on his journey through the town ever since.

When Cogswell eventually stops to confront him, the old man says that he's been waiting his whole life for Cogswell to arrive - or for someone like him. As they continue to walk, eventually ending up in a deserted old barn, the old man reveals to Cogswell that he's been waiting years for a complete stranger to set foot in town - someone with no reason to have gotten off there. He's been waiting for such a person because he intends to commit murder, to unleash his life's frustrations on a victim who he would never be suspected of killing.

The old man's hand is in his pocket at this point, assumedly holding a knife. Cogswell then quickly moves his hand into his own pocket and declares that his plan was to come to a town where no one knew him and take the life of a complete stranger. The old man and Cosgwell are left in a stalemate and the final scene sees Cogswell boarding the train to leave town with the old man returning to his post on a bench at the station - waiting for another unknown stretch of time for the next opportunity to act on his desire.

Despite the potentially dark subject, this is not a grim tale. We know that Cogswell isn't a killer and we also know that the old man isn't much of a threat. He may well harbor murder in his heart but his ability to put that into action is easily thwarted. When we see him last on the station platform, it's not entirely clear whether his encounter with Cogswell may have dealt a lasting blow to his murderous dreams. Perhaps now he'll just be an old man watching the trains pass by, wishing he had taken a life when he had the chance.

"The Town Where No One Got Off" isn't an outstanding example of TV terror but it does bring together several of my favorite things - trains, sinister small towns, Jeff Goldblum, and the fall (much of the episode is taken up by dialogue-free shots of Goldblum walking alone through this town at the peak of the fall season, accompanied only by a unmistakably '80s synth score). I also like how the story doesn't come down to a physical struggle at the end. Cogswell doesn't have to wrestle the old man for a knife, he doesn't have to kill the old man in self defense, and he doesn't even make the move to report this man to the police. He just gets back on the train, leaving this man who he knows is a potential killer free to resume his search for a victim.

Perhaps his brusque treatment by the townsfolk leaves Cosgwell unmotivated to alert them to the monster in their midst. Or maybe as a writer, he knows that you can't persecute someone for their thoughts - twenty years spent thinking about murdering a stranger hasn't made this old man an actual killer. Either way, as the train carries Cogswell out of town, it's not the breathless escape of someone fleeing for their life. Instead, it's the departure of a curious soul who has been given an insight into a stranger's darkest fantasies and refused to judge them. Because no matter where you live, that would be rude.
Posted by Jeff Allard at 4:54 AM

That's an interesting review of one of the more intriguing Bradbury Theatre episodes. There's another take on it on my website, www.bradburymedia.co.uk
(direct link to review here:
http://home.wlv.ac.uk/~in5379/rbt/04townwherenoone/town.htm)

Thanks, Phil! I appreciated reading your insights as to the differences between the short story (which I haven't read) and the episode. Sounds like Cogswell's motivations were simplified for the adaptation but I still love the episode!