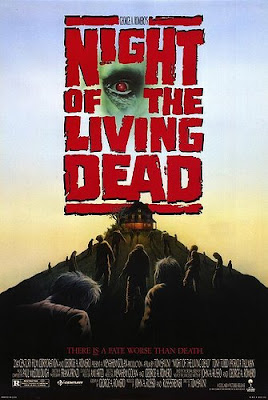 Once George Romero's watershed Night of the Living Dead (1968) became the defining moment of late '60s horror, the new cool in ghouls for the next two decades was zombies. All through the '70s and '80s, the undead marched en masse across the screen, sent from all corners of the world with one purpose in mind - to feed on the flesh of the living.
And it was all thanks to that grainy black and white classic from Pittsburgh that galvanized audiences with an almost newsreel-like verite. But after over twenty thriving years of copycats and rip-offs - many of them cult classics in their own right (everything from Let Sleeping Corpses Lie to Night of the Comet) - it was the commercial failure of 1990's Romero-written and produced, Tom Savini-directed Night remake that hastened the end of Zombie Cinema as fans knew it. Save for the limited release of Michele Soavi's Dellamorte, Dellamore (1995), after NOTLD '90 the undead were M.I.A. in theaters for the rest of the century. Not until 2002's Resident Evil would zombies come back into popular fashion. But while NOTLD '90 was found wanting by audiences at the time, I have to say that I unabashedly love this movie and revisit it often. When fans talk about the upper class of remakes, I believe that NOTLD '90 should have a place in that company.
By 1990, genre fans had been inundated with a previous decade's worth of remakes that brought new levels of big budget spectacle to former B-movies such as The Thing, The Fly, The Blob, and Invaders from Mars but unlike those more lavish productions, one of this film's charms is that there's very little - outside of a few of the more convincingly grisly make-up effects - that couldn't have been done just as well in 1968 had the original been just slightly more flush with cash. Although the FX (courtesy of Optic Nerve Productions) are often very cool and startling (in fact, I much prefer the zombie designs here to KNB's work in Land of the Dead), this is the rare instance of a B-movie being remade as another B-movie.

But B-movie or no, one key improvement of the remake over the original is in its caliber of actors. No disrespect to Duane Jones and the rest of the original's ensemble of Pittsburgh locals but Savini assembled a choice cast for this film and much of what's memorable about NOTLD '90 is its performances. In particualr, leads Patricia Tallman and Tony Todd (as Barbara and Ben) are especially good, bringing real conviction to their roles. Ben's anguish ("Goddamn all of you!") and Barbara's growing resilience are both well-played and both actors have their share of indelible moments. Barbara's brief but poignant encounter with a zombie clutching a doll is one of the highlights of any of the Dead films and I love Todd's burst of mad laughter in the basement towards the end as he finally realizes how close to escape they all were earlier. It's a moment one can imagine as the irony-laced final panel of an E.C. Comics tale, complete with "Ha Ha Ha!" scrawled across the page in block letters.

Savini doesn't catch lightning in a bottle the way that Romero did but he turns in solid work (with some rumored uncredited assistance by Romero) and Romero himself clearly put as much thought into his script as he would've to any of his own Dead sequels. Whereas the original gained much of its energy through the palatable sense that it was written quickly, without being finessed, the remake is interesting in that we can see Romero having a chance to tell his story again from a more reflective place in his life and career. His script for the remake comes from the hand of a more seasoned writer and in turn is much less of a blunt instrument than the original was.

For example, it's a small detail but I like how Romero lays in the subtle suggestion that it's the sound of Ben and co. hammering boards to secure the house that draws many of the zombies towards the farmhouse in the first place. After all, this place is in the middle of nowhere - why would a horde of zombies come to it in such numbers? Had the survivors simply laid low, many of the zombies who come to attack them might have shuffled past the house with no thought to approach it, leaving an easily manageable number of zombies to contend with. But in doing what they feel is right, by taking 'heroic' measures, they only draw death closer to them. It's that kind of wry touch that Romero pulls off so well.

Early on in 1978's Dawn of the Dead, the film's fleeing protagonists fly their helicopter over an open field full of good ol' boys who we see treating the undead plague as an excuse to get drunk, party, and shoot zombies for sport. While this moment is played for derisive laughs in Dawn (with the country song 'Cause I'm A Man emphasizing Romero's send-up of redneck values), in NOTLD '90's effective coda, Romero and Savini now let us observe these same events through Barbara's eyes as tragedy ("We're them and they're us.").
With its slicker production values, NOTLD '90 lacked the immediacy of the Vietnam-era original but while this may not have been a movie of its time, I believe that time has been on its side. Of course, even close to twenty years later some fans continue to resent the idea of a Night of the Living Dead remake as a matter of principle. But for me, when comparing the two Nights, I can't always see things in black and white.

Good writeup of a great remake.
I think one reason the remake came out so good is that they resisted the usual temptation to 'modernize' the story... sex it up with a younger, randier cast... drop in lots of pop-culture references... and basically trod all over the stuff that was great about the original.
The elements that are changed come off like interesting musings on the original... some 'what ifs?' and 'how comes?'... rather than revisionist and 'corrective'.

Yeah, if this had looked too much like a movie of the late '80s, early '90s, it might've done better at the time but it wouldn't play as well today. In the long run, I think Savini and Romero made the right choices with this film.

Dude, have you seen the Last Night of the Living Dead remake? The one that is in 3D.

Anyway, I too love this version and think the cast is of great caliber as well.

Did you know that Tallman was once a student of Charles Nelson Reilly?

You heard it here first folks!

No, haven't seen the 3D NOTLD remake. That looked way too painful. And thanks for the cool trivia about Tallman and Charles Nelson Reilly - I grew up watching Match Game so Reilly's an all-time favorite with me!