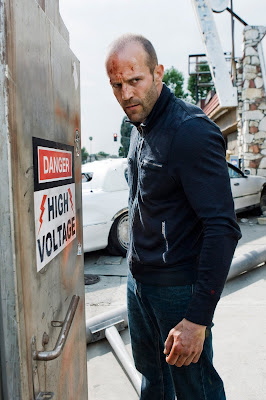 You probably weren't expecting Crank 2 to be the greatest movie of all time. I know I wasn't. But that's kind of what it is. Now, don't fault me if I backtrack on that statement when reminded that, well, there's actually a lot of movies greater than Crank 2 (like 1991's The Last Boy Scout, for example). If I'm erring on the side of hyperbole, it's for a good cause. For film fans of a certain stripe, Crank 2: High Voltage is a movie worth celebrating - one of the most gonzo action movies to ever reach a theater screen.
Judging by what Crank 2 is able to present with a mere R-rating slapped onto it, I guess the attitude of the MPAA to filmmakers these days is "hey, the country's in the shitter - show whatever the fuck you want." At the very least, Crank 2 - on the heels of films like last year's gore-soaked Rambo and Punisher: War Zone - proves that if anyone is thinking about making an action movie that doesn't pull any punches, they should feel free to do so. I have a feeling that even Cannibal Holocaust (1980) would be skirting an R-rating these days.

Picking up at the exact moment that 2006's Crank left off, Crank 2 begins as professional assassin Chev Chelios (Jason Statham) is seen plummeting to Earth from a helicopter only to land on a city street (after bouncing off a car). Soon after hitting the ground, his impossibly resilient body is scooped up by the minions of a Chinese mobster and taken away for purposes of organ harvesting. One of the most appealing qualities of Crank was that its ending was so decisive in annihilating its main character that it all but forbade a sequel. And yet, returning writer/directors Mark Neveldine and Brian Taylor begin Crank 2: High Voltage with no apologies, no sheepishness that this follow-up is a cash-in. Instead, you'd swear that this is the exact sequel they had in mind before the first film even opened.
While the first film bent the laws of reality, this burns them from existence. Chev Chelios is now officially some kind of indestructible superhero or video game character. Early on, he forcibly gets off the operating table on which an artificial heart with a dying battery has been placed into his chest and he sets out on a mission to have his own heart returned to its rightful place. In pursuit of that goal, Chev must keep his flagging artificial heart juiced up. Every time Chev gets a new dose of electricity, it's like seeing Popeye eat a can of spinach.
Like Crank, this is another race against time, with Chev having to deal with multiple - and usually heavily-armed - impediments along the way. But while the first film was extreme in its own right, this sequel makes Crank look as serene as an episode of Bob Ross' Joy of Painting, delving even deeper than the original did into a visual language suggesting the result of treating severe epilepsy with a raging coke habit. Along with its warped, agitated visuals, violence is perpetrated either by - or on - nearly every person in this film. Whereas in most action movies, violence is an intrusion on the character's lives - like a storm that has to be endured - in the Crank universe, these characters exist solely to do harm both to each other and themselves.
I remember watching Oliver Stone's Natural Born Killers in 1994 and seeing even young audience members walking out on it, unable to handle Stone's blitzkrieg editing style. But what was once a shock to the system has been accepted as the language of action cinema. In step with the spirit of escalation, Crank 2 sees Neveldine and Taylor daring even hardened action junkies to keep up with Chev Chelios's exploits. The late film critic Pauline Kael famously panned 1981's Raiders of the Lost Ark by saying its non-stop action was "like being put through a Cuisinart" but that reaction now seems laughable. After all, who knew then that commercial television series, such as 24, would one day move at a far more breakneck pace than Raiders? It's scary to consider the possibility that Crank 2 could come to look lethargic in years to come but for now, at least, it's like nothing less than stepping on a live wire.
Posted by Jeff Allard at 7:27 PM

Any movie that has a living severed head in a fish tank and a fight scene that pays tribute to 'War of the Gargantuas' can't be all bad. A few scenes were a bit uncomfortable to watch, especially in a movie that's supposed to be just mindless fun, but overall I appreciated that the filmmakers weren't afraid to push the limits.

I think the first 'Crank' is the better film. It had the advantage of freshness, not to mention a better script. But then, this movie has Corey Haim and Bai Ling in the roles they were meant to play. I wasn't blown away, but I still had a pretty good time watching this.

Yeah, the 'War of the Gargantuas' scene is definitely a gold star moment. For what it's worth, the first Crank was probably better from a story point of view but the sheer exhaustive lunacy of this movie won me over.

Awesome review...can't wait to see it for myself!

Based off of the trailer for the first Crank I had no idea what I was getting into and I was pleasantly surprised by it's hyperactive insanity.

Crank 2's adds aren't hiding a thing, they are showing what the film really is...a movie I can't fucking wait to see!

Don't wait to check it out - I have a feeling Crank 2 won't be lasting long in the theaters! It's too bad it's going largely ignored as I think it really delivers the goods.

Because of this fine post I went to see Crank 2 the other day and I gotta say it truly ruled. Thanks Jeff for pointing me toward my new favorite movie! -UNK

Awesome, Unk - I'm glad I didn't steer you wrong! In a just world, Crank 2 would be lord of the box office over Wolverine!