Cloudy With A Chance of Meat Hooks 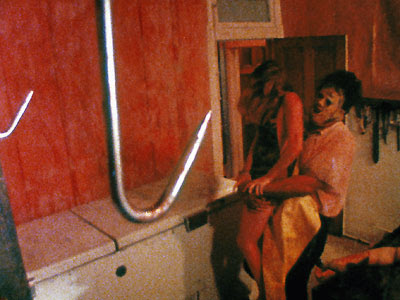 Soon movie screens won't be able to contain the fury of Leatherface. According to a story in Variety, the next installment of the Texas Chainsaw Massacre series will not only be under the auspices of Twisted Pictures (rather than Platinum Dunes) but will also be in 3-D.

Some say that in the case of horror movies that 3-D detracts from suspense or whatever but while I understand that complaint I think it's all in how the story is told. There's only been two big 3-D horror movies so far since the recent 3-D revival - My Bloody Valentine 3-D and The Final Destination - so it's a little early to tell how horror and 3-D will continue to develop together.

There's obviously a lot of resistance to the format among some genre fans but frankly, I'm stoked to see zombies (Resident Evil: Afterlife), vampires and werewolves (Underworld 4), man-eating fish (Piranha 3-D), Jason (Friday the 13th Part 2), Michael Myers (Halloween 3-D), and even Jigsaw (Saw VII) all in 3-D. Maybe the format is still a novelty but color film and sound must've seemed like novelties at one point, too. Besides, in the case of Texas Chainsaw, I know that meat hooks and chainsaws are going to play great in 3-D. I'm just stating the facts here.
If I could offer one suggestion to Lionsgate, though, the poster for TCM 3-D has got to bear the tagline "You Haven't Seen A Massacre Until You've Seen A Massacre In 3-D!" Granted, as taglines go it's no "Who Will Survive And What Will Be Left Them" but I sure like the sound of it.
Posted by Jeff Allard at 10:17 AM

Interesting. Not sure I want to see the Sawyer family home in 3D!

Yeah, that'll be quite the visual! Given that it's Twisted Pictures, I'm not expecting much from this but then again it could be decent. Stranger things have happened.

This is better news than a 3-D HALLOWEEN, at least. The gimmickry of 3-D has its place, I'm definitely down with it, but it seems like a noisome intrusion on the quiet, more subtle creep-outs that mostly fuel the best HALLOWEEN stuff.

But something as ghoulishly over-the-top as TCM very well might benefit from the slight tackiness of 3-D packaging. I could also get behind a 3-D SAW flick... and while I'm vaguely excited about PIRANHA 3-D, I also keep remembering JAWS 3-D and getting maybe a few inklings of second thoughts about this underwater menace in the third dimension...

TCM definitely has elements that seem natural for 3-D. But when I think of Carpenter's original Halloween, I can imagine it playing great in 3-D as well. Not just the jump scares where Michael suddenly steps into the frame or lunges at a victim (although one moment that would be spectacular in 3-D is when the body of Lynda's boyfriend comes swinging out of the closet) but also the moments where we see Michael lurking in the background of scenes, like when Annie is talking on the phone or she's in the laundry room. I think the depth of the 3-D image would make moments like that - where Michael is this spectral prescene in the background - very eerie. So I think that a Halloween movie, if done in the style of Carpenter, would be an ideal fit for 3-D.

I just hope Patrick Lussier isn't replaced when it comes time for Halloween 3-D to go before the cameras. I bet he'll deliver a pretty cool film if given the chance.

I'm pretty much all set with 3-D in general as it just seems to be tossed in there for the sake of its recent surge. But, I think that they are a viable way to tell a story and they are amazing to watch when the film is made in 3-D, not just converted into the "other dimension!"

I am honestly more concerned that Twisted Pictures has the rights to the franchise now than I am of 3-D version.

Yeah, I'm not expecting great things from Twisted Pictures. The Saw films, Dead Silence and Repo! The Genetic Opera - not much of a track record there. Oh, and Catacombs too - a direct-to-DVD mess that's one of the worst films I've had to review. We'll see who they get to write and direct this before I start to get either depressed or hopeful.

Can't say I really want another TCM movie, 3D or 2D, but I do love the title of this blog.

Well, even if the new TCM sucks, at least it inspired this popular blog title!