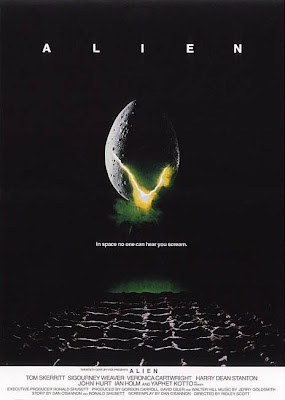 I may be forcing Trick Or Trailers to peak early, but I can't hold off on spotlighting Ridley Scott's Alien. Even though it borrowed liberally from the likes of It! The Terror from Beyond Space (1958) and Planet of the Vampires (1965), Scott's film blew past its sci-fi predecessors to establish the benchmark for space-set horror.

It's common now to see studios spending big money on genre pictures and as a rule, horror and science fiction films don't look like ratty B-movies anymore (if a genre film is made on the cheap, like Paranormal Activity, it's the stuff that headlines are made out of). But in 1979, it was still relatively rare to see a science fiction or horror film treated like an A-movie. One of the criticisms leveled at Alien, in fact, was that some found it obscene that so much money had been lavished on such a flimsy story (if these people only knew what the future held for cinema!). But Scott was a stylist who initially honed his craft in commercial work (the kind of professional background that came to be common among directors) and the look that he gave Alien was indispensable to the film's success.

The trailers for Alien were every bit as strikingly designed as the film itself and as opposed to the recent sci-fi/horror film Pandorum - which while being a more than decent movie, could not have had a murkier, more unappealing ad campaign - whoever was in charge of getting the word out on Alien back in the day hit a bullseye. With only giving the sparest idea of the story, and without including any lines of dialogue (or a good glimpse of the alien itself), the teasers and trailers for Alien conveyed the most important fact about the movie - that it was going to terrify you. "In Space, No One Can Hear You Scream" still holds the title as Best Tagline Ever, topping even The Texas Chainsaw Massacre's infamous "Who Will Survive And What Will Be Left Of Them?"
Watching these trailers again, it makes me wish that someone today would be able to take the kind of resources that Scott had to work with and apply them towards making a movie that wants nothing more than to be mercilessly frightening. Nowadays when a horror film has a big budget, it usually has to be a PG-13 hybrid of action and horror but Alien remains the rare instance where a big budget film put everything it had towards scaring an audience senseless.

For a better quality version of the above trailer, click here. And here's a TV spot that carried over the memorable 'egg' imagery from the trailers.

Man, we really knew how to tease a movie in those days. Those trailers worked so hard to establish their own mood without giving away ANYTHING that was important. And in those pre-web days, Fox was so successful at keeping Giger's alien design out of the media. You wanted to see it? Buy a ticket, buster.

And how I loved 1979, or like Newsweek called it, Hollywood's Summer of Horror. In the era before sequelitis, that meant something.

Senski, I've been looking for that issue of Newsweek forever and a day! I remember when it came out - there was a picture of Sigourney Weaver on the cover, I believe - and it covered all the big horror releases of that summer like Alien, Prophecy, Dawn of the Dead and Amityville Horror. Every time I go to a convenion, I keep hoping someone will have a copy of it but no luck so far.

Definitely a bad-ass trailer for a bad-ass film. And I don't care what anyone says, nothing against 'Aliens', but I think this is the best movie in the series.

I'm with you on that. I love Aliens and for awhile I considered it my favorite of the series but there's something about the purity of Alien that can't be beat.

That trailer still gives me chills. You've got this spooky soundtrack slowly growing in intensity punctuated by that alien wail, over alternating shots of Ripley's panicked flight and static shots of ominous things, until suddenly WHAM explosion of sound and action and nastiness. You just know all sorts of very bad things are going to happen in this movie. Too many horror trailers today are about showing action, while this one really showcases the Fear.