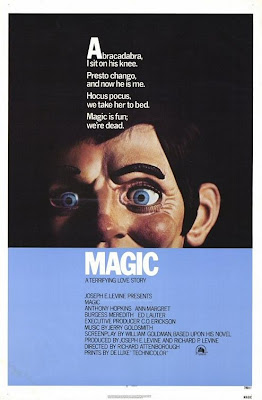 I would think that after someone made the first ventriloquist doll, put it on their knee, and began to make it 'talk,' that whoever was witnessing this sick spectacle play out would've immediately and forcefully said "knock it off!" I mean, honestly - how psychologically damaged and starved for entertainment did people used to be that ventriloquism ever seemed like a good idea? From top to bottom, it's truly unhealthy. But had good sense prevailed and all public displays of ventriloquism had been outlawed, we never would've had the 1978 thriller Magic to enjoy.

More correctly, I should say that we would've never had the trailer for Magic to enjoy because while the movie - starring Anthony Hopkins as a ventriloquist suffering from multiple personality disorder - is deadly dull, the 30 second trailer for Magic is the stuff of Gen-X legend. I've read that this spot aired only once on television before being pulled due to parent complaints that it gave their kids nightmares but if that's the case then I must've been real lucky to be in front of the TV when it made its one and only appearance.
If someone watching it for the first time now finds it hard to imagine how it would traumatize even a young kid, I think what really scared kids my age about it was the way it totally ambushed them. There's no prelude to what you're seeing, no build-up to the scary stuff. It just jumps right into Fats the Dummy talking in a big close-up, right at the viewer, and I'm sure that whatever commercial or program had been airing before this came on was something completely innocuous. This spot blindsided kids and at just 30 seconds, it was over before they even had a chance to really register what was going on. Years later, when I finally saw Magic, I couldn't believe how dreary and unexciting it was. But the original trailer still casts a shivery spell.
Posted by Jeff Allard at 5:19 AM

Email ThisBlogThis!Share to TwitterShare to FacebookShare to Pinterest
Labels: Magic, Trick Or Trailers

Oh, no, this one aired a LOT, and it was a subject of discussion among my high school friends as to who could memorize that poem first. Years later, I had to recite this for the World's Largest Trivia Contest that I play in annually.

Siphon off some of the adrenaline and lower the pitch, and you can hear Lecter in that voice...

These Trick or Trailers have been such a blast!

I figured that ad couldn't have just been a one-shot deal - although I do only remember seeing it once. Maybe I was so traumatized I just stopped watching TV for awhile! Glad you're enjoying Trick or Trailers, Senski - it's been fun picking these out. Just three more days to go!

I really thought this was going to be a better movie. It was pretty dull to me too. And with such potential! Dummy dolls are always creepy!

Yeah, ventriloquist dummy's are wicked scary and I can totally see why this would creep any kid out...it creeps me out now! I would have so shit my pants as a kid!

I almost bought this movie a few time used for $5, so I'm glad I didn't since you do not seem too keen on it, but I would still like to check it out someday.

Wow, one of the defining scares of my childhood - along with the Zuni Doll from Trilogy of Terror. I will never forget the night I first saw it. I was all of about six, watching the Love Boat/Fantasy Island block with my mother on a Saturday Night. She stepped out to go to the kitchen and that commercial came on.
Sweet Jesus. I still can't believe how crazy and angry that thing looks. "Homicidal" personified.

I know I saw that ad as a kid but it must not have made much of an impression on me... but I remember wanting to see the movie and being a tad disappointed.
Not a bad movie, just not scary... unlike that creepy Twilight Zone episode, or The Dead Of Night.

MrJeffrey, I went back to Magic about ten years ago thinking that I might appreciate it better as an adult but no dice - still boring as hell.

Matt, if you want to check out Magic, it seems like AMC shows it late Friday night every few weeks. But I wouldn't be in a rush to watch it.

Erich, it's funny how parents never seem to be around when scary shit pops up on TV. My mother left the room when I saw the Magic commercial, too!

Knob, this definitely is not in the same league as the "Talking Tina" TZ or Dead of Night. I couldn't even point to one creepy sequence in the whole movie.