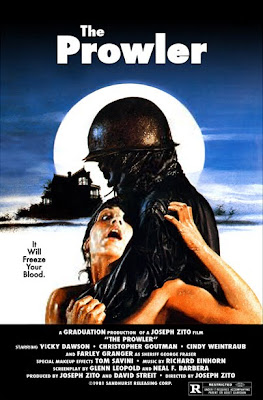 To speak nostalgically of ‘movie magic’ usually conjures up thoughts of the wizardry associated with pioneering special effects geniuses like Willis O’Brien or Ray Harryhausen. But during the slasher boom of 1978 to 1983, advances in practical make-up FX made it possible for artists to slice, dice, burn, bleed, puncture and purée the human form in the most convincing manner possible.

Make-up maestro Tom Savini was the undeniable superstar of the splatter era, becoming a household name among households with FANGORIA subscriptions, and although this tale of a killer stalking a graduation dance doesn't have the same iconic status as Dawn of the Dead (1978) or Friday the 13th (1980), with The Prowler (1981) Savini delivered arguably the most ghoulishly convincing FX of his career.

While Savini is revered among slasher buffs for depicting the slaughtering ways of Mrs. Voorhees and her mad mongoloid offspring Jason, The Prowler is where he really got brutal. First off, in The Prowler the killer uses a pitchfork - and nothing tells the audience that a slasher villain is serious about killing like giving them a pitchfork. When a killer uses a pitchfork, it’s understood that they’re hardcore. You don’t see it used a lot in The Prowler but when that pitchfork is put into play – as in the film’s centerpiece shower murder in which the Prowler attacks actress Lisa Dunsheath – it’s the stuff of slasher legend.

The prospect of pitchforking a nude woman might’ve made lesser men pause (or to work under pseudonyms) but director Joe Zito and Savini embrace the opportunity. No doubt there were easy techniques behind this effect (as there was with many of Savini's effects, which often took their cues from stage magic) but Savini and Zito do an expert job of selling the illusion (after Dunsheath is impaled, we hear the tips of the pitchfork scraping against the tile of the shower wall), making this an unforgettably ghastly scene. While not every slasher victim of the early ‘80s had the luxury of being able to simply gasp at the sight of their off-screen assailant (like Friday the 13th’s Laurie Bartram) before the filmmakers discreetly cut away to the next scene, this isn’t even as elegant as Robbi Morgan having her throat slashed or Jeannine Taylor receiving an axe to the head. No, even in a slasher film when a naked woman is impaled by a pitchfork and jacked up off her feet against a shower wall, an invisible line of etiquette has been breached.

Even more manners are decimated by the film’s second-most legendary effect, a climatic shotgun blast to the head. Savini was something of an expert head exploder in his FX heyday, first depicting a shotgun blast to the head in Dawn of the Dead (as a zealous S.W.A.T. member shoots a zombie point blank), then doing the same in 1980's Maniac (Savini blew his own head apart here, portraying a guy out for a night at the disco who runs afoul of a shotgun wielding Joe Spinell), and in The Prowler an instance of cranial carnage serves as the film’s final coup de grace. Some might cry that The Prowler’s exploding head is just a case of Savini repeating his past tricks but when something’s good, it’s good.

Savini’s work in The Prowler is so good, in fact, that he even makes the film’s two throat slashings memorable – no small feat given that by 1981, these were already the most commonplace of slasher movie kills. Seeing a character get their throat slashed in a slasher film was about as remarkable as seeing a character in an old-time Western get shot in the gut and keel over but Savini challenges discerning gorehounds to shop and compare, delivering premium throat-slashings with outrageous super soaker action.

Unfortunately, the pacing of The Prowler could’ve been improved, with too much time separating the already sparse number of kills (a half-hour between kills in a slasher movie is too long) and it was also a bad decision on the part of Zito and screenwriters Neal Barbera and Glenn Leopold to pair the film’s heroine, aspiring journalist Pam MacDonald (the fetching Vicky Dawson) with her deputy boyfriend (Christopher Goutman) for almost all of her scenes so there’s very little of her in solo jeopardy – with a scene of Pam hiding under a bed as the enraged killer trashes the room searching for her (almost identical to a scene from the same year's Friday the 13th Part 2, even down to the appearance of a rat scurrying next to the heroine’s face) being an effective exception. Also, while most slasher films with a whodunit angle at least tried to give the audience a range of plausible suspects who could be the killer, the identity of the Prowler is by far the most lamely transparent of all slasher movie mysteries.

Still, Savini is so 100% on his game here that those flaws ultimately don’t matter. Despite their reputations, very few old-school slasher films are especially graphic. The Prowler, however, is a grisly exception to that. Savini may be most celebrated for his contributions to the zombie classics Dawn of the Dead and Day of the Dead (1985) – films with FX far more elaborate than seen in Savini’s slasher films, which had to strive for a greater sense of plausibility (and usually strive for an R-rating as well) – but The Prowler features signature work from the Sultan of Splatter.

It's often been said by critics that if you’ve seen one slasher film, you’ve seen them all. But if there’s a mantra to the slasher genre, it’s that it’s not the weapon you use to kill a character (a shish—ka-bob, a hot poker, a pitchfork), it’s how you stick it in. And with its uncomfortably convincing realism, Savini’s work in The Prowler still has the right snuff.

Savini's work is excellent in THE PROWLER, but I have always felt that the murky cinematography lets it down. Good piece.

Thanks, Phantom! I agree that The Prowler's cinematography is weak - it's probably one reason why the movie isn't more well-regarded.

I always thought that this had a weak title for a slasher, and should have gone by the alternate - Rosemary's Killer. To my mind, a prowler is some punk who skulks around your backyard and knocks over trashcans; when your dog barks, he's outta there!

I'm with you on the whole pitchfork thing, Jeff. Something about the killer having to put their whole body into it that just makes you wince. That's why I like the ending of the trailer for the Crazies remake...all those bodies strapped down on the gurneys, just waiting...

I remember drooling over pics of The Prowler in Fangoria as a junior high schooler, but it wasn't until the late '90s that I finally got the chance to see the film. It was largely worth the wait, save for what you and Phantom mentioned.

Random thoughts:
* I really dig when slashers from that era had a flashback/origin intro, like Prowler, House on Sorority Row, Prom Night, even Humongous.
* Gotta love the '81 hairstyles. All that feathering makes me get nostalgic, especially in horror flicks of the time.
* You left out a mention of that rockin' band at the dance!
* Who is that dude doing voiceover in the trailer? I feel like he did dozens of trailers for horror films from that era.

Senski, I guess I'll have to stand alone in digging The Prowler as a title. It's always struck me as a perfectly creepy, if generic, title for a slasher movie. Maybe they could've come up with a better one but Rosemary's Killer doesn't strike me as much of an improvement.

But we're in total agreement about the fear factor of pitchforks! It's funny that you mention The Crazies trailer because that part jumped out at me, too!

And FF, I love slasher movies that begin with flashbacks, too! The flashback in The Prowler is an especially nice one. Good atmosphere. As for your other points, the '80s hairstyles are awesome, of course. And I did leave out mentioning the band but I felt I had to focus more on the splatter side of The Prowler. I also nelgected to mention the welcome presence of Thom Bray of TV's Riptide and Carpenter's Prince of Darkness in the cast. Bray's character really should've fell victim to the prowler but instead avoided the mayhem altogether.

And the voiceover guy may have been Don LaFontaine who passed away last September but who did scores of trailers. His voiceovers for the Friday the 13th films are some of my favorites.

I just rented this from Netflix last week! It is a good film from its era, even if, like you said, the plot/pacing kind of drags.

The shower scene was incredibly tough to watch, as it was amazingly well done. I have seen tons of these flix, yet this one still had the ability to make me wince.

I also noticed the similarities to "F13 Part 2" (I had to go check to see if Zito had done part 2, and was surprised he hadn't!). Interesting.

Pam is gorgeous, in an Amy Steel/Jennifer Runyon way. Surprised we didn't see more of her.

Thanks Wings! It's funny how similar parts of The Prowler and Friday Part 2 are but it must just be coincidence as they both came out in '81. As for Vicky Dawson, I'm also surprised that she didn't do more too as she has a great look. Then again, I'm surprised that a lot of actresses (Amy Steel, especially) from early '80s slasher films didn't go on to be bigger stars.

Yes, true about Amy Steel, too. I always wondered why someone so beautiful and so talented didn't become a bigger star. Ah well.

I missed this one for decades and finally caught it about 5 years ago at a revival house on the big screen. I could not believe I had missed it for so long but I was happy that there was such a good slasher that I had not seen 1,000 times already. What a great (truly explosive) ending too!-Unk

Since YouTube has the whole movie up in segments I went ahead and watched it.
Not a lot of kills, but for the time they were pretty darn brutal.
It seemed particularly sparse on characters and plot... even for a slasher movie... and despite having relatively few kills. Too much of Pam and the Deputy poking around in dark houses.
It almost felt like there were setups for kills that got dropped from the script... like what happened to the guy in the wheelchair? It seemed like the guy in the jail cell and the 'geek' couple in the basement were also potential slaughters that didn't happen.

Unk, I first saw a pic of the aftermath of that climatic shotgun blast in the pages of FANGORIA and I thought it looked like the most sickening gore effect ever. The wall behind the exploded dummy head was soaked red.

And Knob, I agree that the Prowler didn't rack up the body count that he could've (like I said in another comment, Thom Bray's character had victim written all over him and yet he survives) but even though he doesn't put up big numbers, he's an artist with that pitchfork.