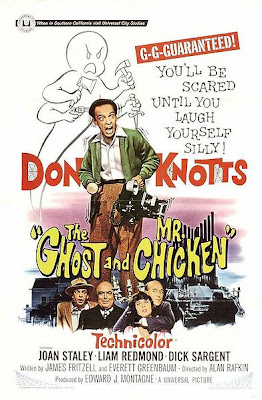 Most fans rate the venerable monster mash Abbott & Costello Meet Frankenstein (1948) as the greatest horror-comedy of all time and while that is certainly an ace choice, my pick for that honor is the 1966 Don Knotts classic The Ghost and Mr. Chicken. Younger audiences know Knotts mostly from his role of Mr. Furely on Three's Company (and an even younger generation of viewers know him from 1998's Pleasantville, if they know him at all) but for me Don Knotts was a highlight of my afterschool hours thanks to Channel 30's The 4 o'Clock Movie, which aired out of Hartford, Connecticut.

Each week, Monday through Friday, The 4 o'Clock Movie was programmed according to a theme, and each theme would repeat several times during the year - which was great if it was five days of Godzilla again but not so terrific if it was, say, another week's worth of Doris Day films. One theme that I was glad to see come around as often as possible was 'Don Knotts Week' when The 4 o'Clock Movie showed the movies Knotts made for Universal Studios after his departure from The Andy Griffith Show (a show that was in constant syndication when I was a kid but which I never watched) - including The Ghost and Mr. Chicken, The Reluctant Astronaut (1967), The Shakiest Gun in the West (1968) and The Love God (1969).

The Ghost and Mr. Chicken was the natural highlight of that week for me, an seemingly effortless mix of humor and light-hearted fright (although the sight of the shears jammed into the portrait of Mrs. Simmons, with blood dripping from it was legitimately freaky to me), buoyed by the spooky/jazzy score of Vic Mizzy (who also composed the theme to TV's The Addams Family and who passed away earlier this week at age 93). The trailer for The Ghost and Mr. Chicken perfectly embodies the fun of the movie, making great use of Mizzy's music and with Don Knotts providing some in-character narration. From the first sight of the cobwebbed-covered organ coming to life, this trailer takes me back to a place of undiminished joy.

It is a great film, without a doubt. Don't know how any times I watched this on the local channel on Saturday or Sunday afternoons as a kid!

Yeah, it was always cause for celebration to see this in the TV listings!

So glad you gave a shout-out to Vic Mizzy, whose sound was such a signifier of my childhood. Was his death an inspiration for today's choice, or a creepy coincidence? If it's the latter, you may want to drop a line to some of the folks connected to your upcoming trailers, Jeff...Angel of Death!

I already did plan on posting on Ghost and Mr. Chicken during the 13 days but I might not have done it so soon if Mizzy's unfortunate death hadn't made the movie immediately jump to my attention.

Always loved this movie... as a kid it verged on being too scary in places.