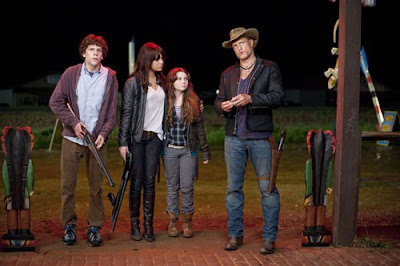 In case you haven't been keeping up on the avalanche of rave reviews it's been receiving, Zombieland is one terrific time at the movies. I honestly can't see many people being disappointed by this one - even the most constipated of horror fans ought to enjoy it. There's one particular moment, though, that I wanted to give a mention to - even though it really has nothing to do with much.

At one point in the movie, Wichita (Emma Stone) cites Anaconda (1997) as being her first R-rated horror movie. Now, maybe it's not a widely known fact but Anaconda is actually PG-13. That's an awfully lazy gaffe to make but yet I found it to be an endearing slip-up.

Movie making - in regards to genre films, at least - has become more and more the province of know-it-all film buffs, always prepared to flaunt the most arcane knowledge about the most obscure films. And yet, Zombieland flubs the rating of Anaconda. Which means that this went all the way to theaters with no one connected with making this movie at any point ever reading or hearing that line of dialogue and saying "You know what? That doesn't sound right." The thing is, I've gotten so used to hearing dialogue written by screenwriters who are out to prove how dense their knowledge of movies and pop culture is that to hear an out-and-out mistake was actually refreshing. And really, the whole movie struck me as a breath of fresh air - only most of what I loved about Zombieland was the deliberate result of great writing, directing, and acting.
Check out my full review of Zombieland at Shock Till You Drop.
Posted by Jeff Allard at 10:48 AM

I couldn't agree more. The people who made this movie were concerned with story and character, laughs and thrills. It was nice to just watch a movie and not be distracted by some obscure reference or homage every five minutes for a change.

Yeah, in other hands the Columbus character would've surely been written not just a geek but specifically a horror nerd who knew all the rules about surviving a zombie holocaust from the movies that he's seen and would be in a position to lecture everyone about what to do. In my head I can hear the dialogue to that version of Zombieland as clear as day ("Hello? Night of the Living Dead - ROMERO?!"). Instead, this character has his own self-generated rules and the movie doesn't feel like one long, insufferable in-joke.

Oh, you know that Wichita is a bullshitter, she probably just flubbed up one of her tall tales!

I LOVE this movie so much and "breath of fresh air" is a perfect way to describe it. I gotta see it again before Halloween!

Yeah, there's a couple of ways to justify that flub. And even if you took it as an honest screw-up, it's nothing that diminishes the fun of the movie.