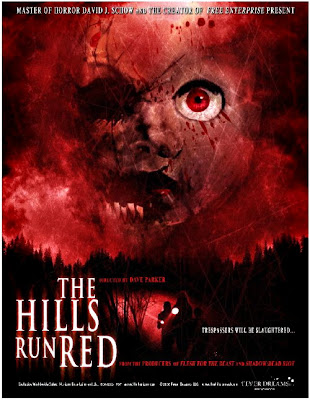 I'm not against the revisiting and retooling of the classic slasher franchises of the '70s and '80s. Even if these reboots have been only sporadically satisfying (and some would say that's an overly kind assessment), I just don't see the harm. Besides, it's not very realistic to expect that studios would leave modern icons like Michael Myers or Jason Voorhees alone for long - so why get up in arms about it? As long as these properties are lucrative, they'll remain active. And yet, at the end of a decade that's seen Texas Chainsaw Massacre, Halloween, and Friday the 13th spearheading slasher cinema again, it's hard not to overstate how energizing The Hills Run Red feels amidst all the deja vu.

Directed by Dave Parker (who previously helmed The Dead Hate The Living) and scripted by David Schow (Leatherface: The Texas Chainsaw Massacre III), The Hills Run Red is arguably the only great American slasher film of the present decade. And I say "arguably" only because I'm not sure if American Psycho (2000) and Wrong Turn (2003) qualify as true slashers or whether they belong in other categories. Whatever the case, The Hills Run Red is a rowdy, but smart, call back to the early '80s style of slasher film - specifically the likes of The Burning (1981) and Madman (1982) which featured woods-dwelling maniacs who had taken on the legendary aura of campfire folklore. Here the maniac is 'Babyface,' the monstrous star slasher of a lost early '80s film titled - da-dum! - The Hills Run Red. Even if everything else had been mediocre in this movie, Babyface alone would've made Hills a notable addition to the slasher pantheon. However, there really is much more to appreciate here.
It's not a perfect film but Parker and Schow show just how far applying some intelligence and genre savvy to a slasher film will get you. I feel like I'm in danger of setting expectations too high for Hills and, I admit, my reaction may be more enthusiastic than the film really warrants but as a slasher fan I found it worth celebrating.

Writer/director Adam Green's Hatchet (2006), was trumpeted as being "old-school American horror," with its posters boasting that "it's not a remake, it's not a sequel, and it's not based on a Japanese one," but yet that film had so little going on besides its kill scenes (which admittedly did look great) that it ended up simply pointing out the limitations of the slasher genre rather than vaulting past them. If anything, Hatchet was a deliberate step backwards, making it appear that slasher movies no longer had anything to offer to fans except nostalgia. And if that's the case, if the only new ideas are going to be about creative kills, why not go ahead with remakes of known titles like My Bloody Valentine and Friday the 13th? But The Hills Have Red proves that even if your film is about the search for an '80s slasher movie, you don't have to make a film that's stuck in the '80s as well.
Read my full review at Shock Till You Drop.
Posted by Jeff Allard at 9:28 PM

Quite interesting. Gonna look into this one! Thanks!

It won't change your life, but it's a cool movie.

Cool review, great blog. Definately checking this one out.