Having grown up during the peak years of the revenge of nature sub-genre, I'm an easy mark when it comes to animal attack films. So to see that a killer bat movie - one starring Lou Diamond Philips (!) - was coming to theaters was instant cause for celebration. I was so hyped for this and, in the end, it was about as good as I expected - which is to say it was not very good at all.

Nonetheless, I was still filled with gratitude that someone put killer bats and Lou Diamond Philips together in one film. It didn't have to be good, you know, it just had to exist. And at that, it succeeded.

Screenwriter John Logan did ok for himself post-Bats, going on to write the screenplays for Ridley Scott's Gladiator and the James Bond film Skyfall, among others. Director Louis Morneau, on the other hand, didn't go on to do quite as much - mostly direct-to-video horror sequels, like 2003's Hitcher II and 2008's Joy Ride 2. Given that, you'd think he would've also done 2007's made for Sci-Fi Bats sequel, Bats: Human Harvest, but maybe one time at bat was enough. 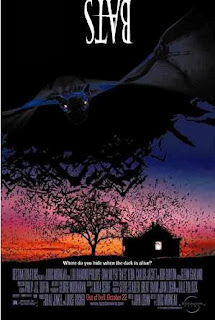 I think I saw this once on Syfy, but don't remember. I did, however, watch Lou Diamond Philips in "Carny" on Syfy yesterday. Not a great movie, at all, but I have spent worse time in front of the tube.

Yeah, LDP usually ends up in some watchable, if not always exceptional, stuff.