Here's a film that could've only been spawned in the '80s, at the height of heavy metal hysteria. Two of the most popular scapegoats parents and authorities turned to when looking to assign blame for bad behavior among teens were heavy metal and horror movies so why not make a horror movie that revolved around heavy metal?

Of course, the problem with Trick or Treat is that it made metal out to be the bad influence that it was accused of being - even going along with that corny old cliché about discovering hidden messages by playing records backwards. So right from the start, Trick or Treat was tone-deaf to the audience it was trying to appeal to.

Released on October 24th, 1986, Trick or Treat failed to make undead rocker Sammi Curr into a household name, even in houses with FANGORIA subscriptions. What the makers of Trick or Treat didn't realize was that in 1986, horror already had a huge rock star on the rise - and his name was Freddy Krueger. 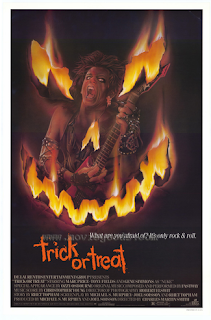